Luke Skywalker Was A Jedi Jihadi, So Emperor Trump Banned Him: Your Saturday Nerdout 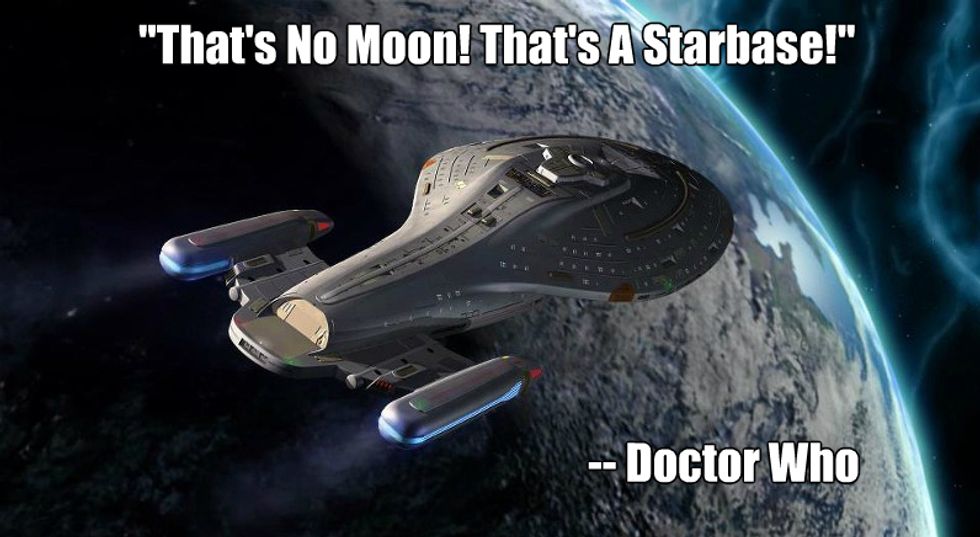 I've got a bad feeling about this...

Are all you nerdlings ready for the big media frenzy surrounding that movie that comes out next Friday? We are, of course, talking about the most anticipated film of the year, the sequel to that beloved classic that there's been so much buzz about, the movie about which all the fans have been saying, "Dammit, if they screw this one up, I am through!" Yes, we only have another week to wait, and then we'll all know whether Alvin and the Chipmunks: The Road Chip is any good. Please keep your damn spoilers to yourselves, OK? Let's get moving -- we have Nerdout Sign!

To help you vent some of that nervous energy you have while waiting for Star Wars: The Force Pulls An All-Nighter And Realizes It's Too Old For This Shit, go enjoy this fine essay, "The Radicalization of Luke Skywalker: A Jedi's Path to Jihad," which melds space opera and poli-sci analysis (from a piece by Anthony Stahelski in the Journal of Homeland Security, no less) to explain how the original trilogy is actually a fascinating portrait of an idealistic young loner's dark journey into radicalization and anti-establishment terrorism. Sample:

Luke is just the kind of isolated disaffected young man that terror recruiters seek out.

Obi Wan — a religious fanatic with a history of looking for young boys to recruit and teach an extreme interpretation of the Force — is practically salivating when he stumbles upon Luke, knowing he’s found a prime candidate for radicalization. Stahelski notes terror groups place a focus on depluralization, stripping away the recruit’s membership from all groups and isolating them to increase their susceptibility to terrorist messaging. Within moments of meeting Luke, Obi-Wan tells Luke he must abandon his family and join him, going so far as telling a shocking lie that the Empire killed Luke’s father, hoping to inspire Luke to a life of jihad.

And so on. It's pretty funny, and unlike most amusing humor musings on Star Wars, includes a works cited list. It ignores one vital question, however: wouldn't tighter regulation on blaster sales help reduce the horrific violence in the outer rim worlds?

And while we're on the topic of alternate views of the events in Star Wars, let's not forget what may be the best of them all, Luke's Change, which is only asking: Was the Death Star an inside job? Prepare to have your assumptions challenged!

And finally, this disturbing reminder that the Culture Wars are everywhere:

[contextly_sidebar id="lA0EaEaRja3AZmFBtgHB4N8SfHoNBBa2"]Shameful. Maybe Kirk Cameron can direct the next installment, with a twist ending revealing that the Force is nothing compared to the saving power of Jesus, Amen.

Elon Musk Will Save Us From The Robot Apocalypse. Thanks!

The only thing you've managed to break so far... is my heart.

If, like us, you spend an inordinate amount of time worrying that a rogue Artificial Intelligence will take over the world and upload everyone's consciousness into a pastel cartoon pony, or other equally terrifying robot apocalypses, then you may in fact be worrying too much. OR ARE YOU? Elon Musk, the Tesla Motors / SpaceX / PayPal guy, announced Friday a nonprofit called OpenAI that's dedicated to developing AI projects that are beneficial to humanity. In 2014, Musk, along with Stephen Hawking, Steve Wozniak, and Bill Gates, issued a letter warning against the development of weaponized AI systems for military purposes. Musk has also

described the development of AI as being like “summoning the demon.” With OpenAI, Musk said the idea is: “if you’re going to summon anything, make sure it’s good.”

“The goal of OpenAI is really somewhat straightforward, it’s what set of actions can we take that increase the probability of the future being better,” Musk said. “We certainly don’t want to have any negative surprises on this front.”

This is, of course, where any science fiction reader should start saying, "uh-oh," because idealistic projects to create beneficent supermachines always go sideways, and then Captain Kirk has to out-think the M5 computer, Dave has to disconnect HAL, or Chell has to find a way to destroy GLaDOS or at least load her into a potato. Good luck, Mr. Musk! We'll see you in hell.

Maybe it lacked the cool horns, but it had a terrific personality.

Chinese researchers have been finding a lot of the cool new dinosaur species in recent years, and last week a team of Chinese and American researchers in announced the discovery of an early cousin of triceratops, that cool popular dino with the three horns and the plated bony head shield. The newly discovered beast is named hualianceratops after the "textured and grooved surfaces found on its skull ("hualian" means "ornamented face" in Chinese)" and was "about the size of a spaniel." It predates triceratops by about 100 million years. The critter also walked on its hind legs, which is a distinct advantage for your semi-accurate Halloween costume designers.

Donald Trump Has A Beef With Thomas Jefferson

Here's one to file away for use when somebody starts telling you that America was designed only to be compatible with "Judeo-Christian values": The Washington Post ran a pretty cool piece Friday on Thomas Jefferson and the other Founders' thoughts about Muslims, or as they were more commonly known back in those days when it was fashionable to wear an onion on your belt, "Mahometans" or even "Turks." According to Denise Spellberg, author of Thomas Jefferson's Qur'an: Islam and the Founders, Islam was rare enough in the Colonies -- though it was certainly practiced among enslaved Africans -- that discussion of the religion was largely hypothetical for the Founders, who treated it as an exercise to consider "how far tolerance and equal civil rights extends":

"In the formation of the American ideal and principles of what we consider to be exceptional American values, Muslims were, at the beginning, the litmus test for whether the reach of American constitutional principles would include every believer, every kind, or not," Spellberg said in an interview.

You should go read the whole piece, because it's good, but guess what! The Framers definitely thought that American freedom of religion was such a wonderful thing that it was even compatible with weirdo-beardo religions that they considered strange and foreign, just like those oddball Catholics and Quakers whose rights they insisted on protecting. In fact, the presence of such religious minorities was part of the reason for the inclusion of the Constitution's ban on religious tests for office. Federalist James Iredell insisted that if any religion were excluded, then "religious liberty" would be a sham:

"It is to be objected that the people of America may, perhaps, choose representatives who have no religion at all, and that pagans and Mahometans may be admitted into offices," Iredell said. "But how is it possible to exclude any set of men, without taking away that principle of religious freedom which we ourselves so warmly contend for?”

That's not a crazy PC liberal from Berkeley. That's a guy who knew his way around powdered wigs and tricornered hats. Let's close with one more Jefferson quote, from Notes on the State of Virginia"

The legitimate powers of government extend to such acts only as are injurious to others.But it does me no injury for my neighbor to say there are twenty gods, or no god. It neither picks my pocket nor breaks my leg ... Reason and free enquiry are the only effectual agents against error.

If Donald Trump wants to exclude Muslims[contextly_sidebar id="A7Gfwgu4dVwUQdjTfkOUmidkmxHNDStt"] from America, he doesn't just have a problem with Islam. He's gonna have to get past Thomas Jefferson, who will bitchslap him from the grave. Hey, wonder if anyone at Tuesday's debate (which Yr Wonket will of course livebloog) will bring that up?

[contextly_sidebar id="JITdfxeupy2opCsFP8XFbY3nHv1lstYO"]Exciting update: The MST3K Kickstarter reached its goal of $5.5 million, which means a dozen new episodes, a thirteenth bonus episode, and even a Christmas special! Best news of the week!

We're going to hope that Stormtrooper is not to scale.