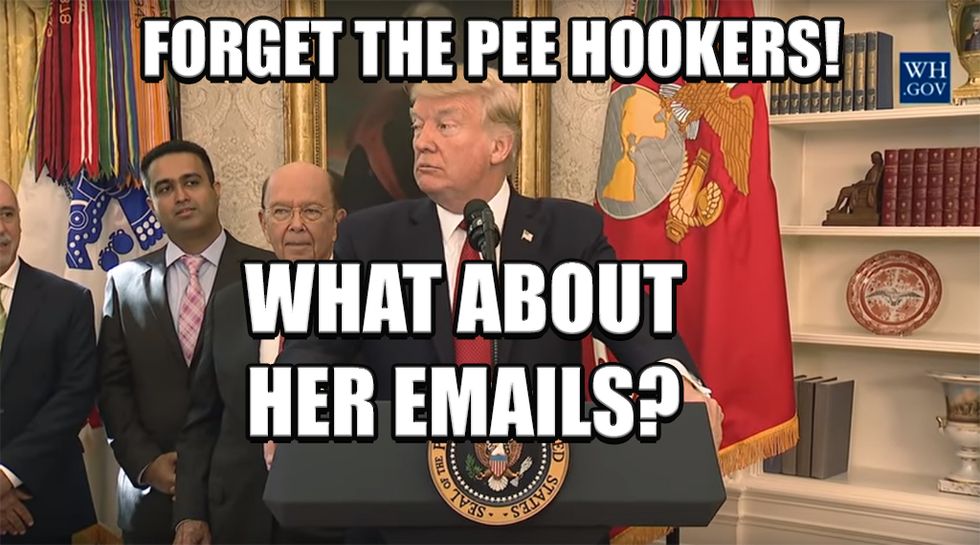 Republicans are losing their minds this morning over a report that THE DOSSIER was funded by the DNC (even though it was initiated by anti-Trump Republicans during the primaries). Somehow that sure means SOMETHING!

Stop the presses because Robert Mueller is working with the US Attorney for the Southern District of New York, Preet Bharara's old job, on the Trump-Russia investigation. I wonder what they'll find? [Archive]

Most Republicans don't really care about Trump-Russia until there's a former Obama administration staffer involved, THEN they start huffing and puffing.

Trump slut Devin Nunes has been sending staffers to work on his own investigation into Hillary Clinton's uranium deal, the perfect distraction for people who are easily distracted!

Oh, you better believe we're talking about this dumbass tweet from Maggie Haberman about THE DOSSIER.For now, we'll direct you (and her) to the definition of the words "Lie" and "bootlick."

New York and New Jersey Republicans are bitching about the Trump tax cuts for the rich after murmurs of a plan surfaced to kill federal deductions for states and municipalities with high taxes, and they're threatening to vote against it. Lol, rich bitches.

While wearing a tuxedo (no shit), Mike Pence cast a tie breaking vote to overturn an Obama-era rule that gave people the power to band together and file class-action lawsuits against financial institutions.

After Trump ruined the lunch of many Republicans yesterday, Louisiana Senator Joe Kennedy commented, "It was a very positive meeting. Nobody called anyone an ignorant slut." Dude, if you have to wonder who in the room is the ignorant slut...

The NAACP is warning black people that American Airlines isn't too friendly in the skies after a series of incidents that "suggest a corporate culture of racial insensitivity and possible racial bias."

A new Military Times poll has found that one in four service members has seen examples of white nationalism within the ranks, with 42 percent of non-white soldiers stating that they had personally experienced examples.

Newt Gingrich went on Hannity and tried to make a joke about Trump assaulting Maxine Waters, but Gingrich himself is a saggy sack of shit that can't even raise his own dick without a $100 bill hanging out of his zipper, let alone one chubby, balled-up fist.

After a DC federal appeals court has kicked the case of Jane Doe, a 17-year-old undocumented teenager seeking an abortion, back to a lower court, the court said that the Trump administration must "promptly and without delay" stop screwing around and let her get her abortion.

The guy tapped by Trump to help build his wall, Kevin McAleenan, has been in legal limbo after rumors surfaced about an affair with a minion, as well as his sketchy fuckery with an overcrowded immigration detention facility.

Two federal appeals court are blocking access to documents that led the Trump administration along its merry path to killing DACA, saying that Trump and his goons don't technically have to tell anyone why they're assholes. (Cough, RACISM, cough.)

A new report from the House Oversight and Government Reform Committee found that there aren't really any penalties for sexual misconduct, suggesting that Uncle Sam ALWAYS keeps it in his pants. Case closed. Casting couch covered. Move along, please.

New audio has surfaced of Alabama's gay hatin' Republican Senate candidate Roy Moore arguing that the SCOTUS decision to leaglize homosex weddings was "even worse" than their ruling in Dred Scott case.

US AMBASSADOR to New Zealand Scott Brown is being investigated by the State Department over comments he made this past summer. Apparently the Kiwis weren't too keen on being told that their hospital workers were "beautiful" and could make many Ameros in the US hospitality industry.

We're about to get our first glimpse of F-35s after the US sends its buggy new expensive stealth toy to North Korea to fly around and...well, that's it, really. It's a stealth fighter, it can't even look intimidating.

Those damn dirty Commies in China re-elected Communist Party leader Xi Jinping to another five-year term during their national congress, but foreign policy nerds are worried about Xi's ambitions.

The US Computer Emergency Readiness Team is warning of a new ransomware virus, "Bad Rabbit," posing as an Adobe Flash installer. The virus surfaced in Russia and is quickly worming its way through Europe and parts of Asia. DON'T SKIP YOUR UPDATES!

Just in case you needed another reason to hate the guy, Kid Rock says he won't run for Senate, suggesting that it was all just a publicity stunt to promote his new album.

And here's your morning Nice Time! Baby goats in sweaters!