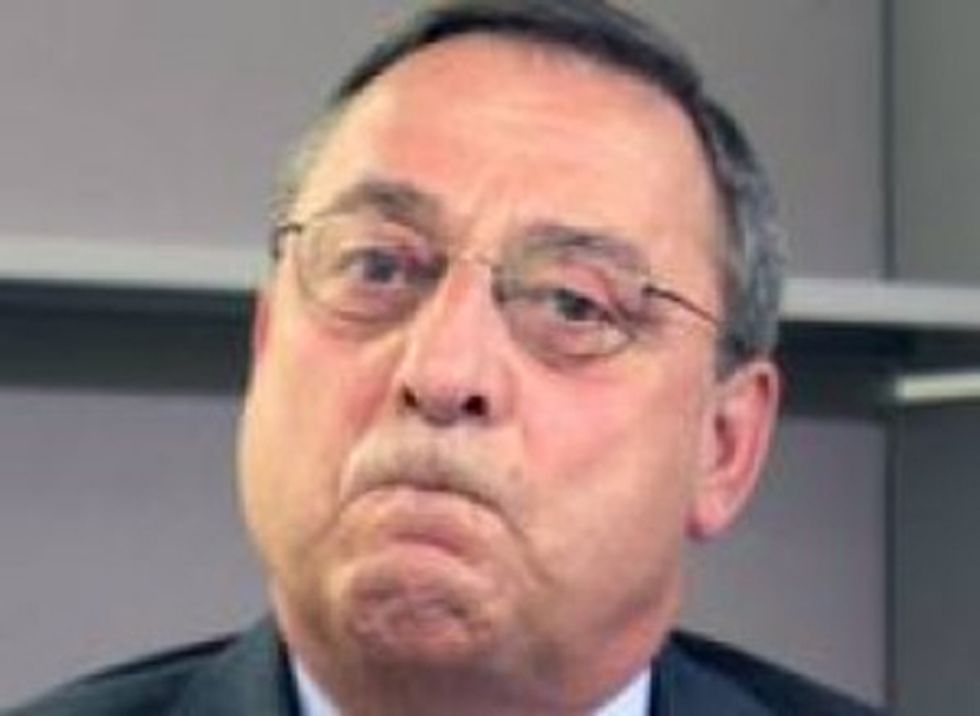 Now that Maine Gov. Paul LePage has definitively proven he doesn't know how to governor any good at all -- accidentally allowing a bunch of liberal bills he'd intended to veto to become law -- it's revenge time. Since he can't get back at the courts or the legislature, he's going after his favorite target: poor people, the one group he really gets a kick out of kicking. His new genius plan? An "asset test" for single childless people on food stamps, to make sure that no single people in Maine collect the state's princely allotment of $29 a week while owning anything more than a house and a single car. Recipients would be kicked off food stamps if they have more than a total of $5000 in savings and assets, especially stuff like a boat or a camper, because since when should the poors have nice things? And here's the kicker: Since the Supplemental Nutritional Assistance Program, or SNAP, is a federal program, the plan won't save Maine a single penny -- but it will help shame people who don't have jobs, which is an excellent reason to do it.

In announcing the change, LePage issued a statement explaining why the asset test was absolutely needed to make sure the poor know their place:

Most Mainers would agree that before someone receives taxpayer-funded welfare benefits, they should sell non-essential assets and use their savings. Hardworking Mainers should not come home to see snowmobiles, four-wheelers or Jet Skis in the yards of those who are getting welfare. Welfare is a last resort, not a way of life.

And if you happen to be a self-reliant backwoodsy kind of person who uses a 4-wheeler or snowmobile to hunt or otherwise help with sustaining yourself, tough shit, that's a luxury now. The new restrictions are just LePage's latest step in a steady stream of screw-the-poor measures. In 2014, his administration started requiring single, childless food stamp recipients to work or volunteer 30 hours a week to qualify for their $29 in food stamps. Roughly 9000 people left the program after failing to meet the work requirements, possibly because they figured that "volunteering" at less than a dollar an hour wasn't worth losing the time they could be looking for work -- which means, obviously, that once they left the program, they all found work, right? Or went hungry, like the Bible wants them to. With those cuts in benefits, Maine grocery stores lost out on the $21.6 million a year that the recipients otherwise would have spent, which somehow makes Maine a much better place, since presumably all 9000 people went out and became venture capitalists.

Critics of the latest measure -- which, as an administrative action, doesn't require legislative approval -- point out that the asset test isn't going to save any Mainers any money, but it will serve as a disincentive to savings, leading people to spend what little savings they may have, making it less likely that they can manage a crisis.

“Research from Maryland and Virginia has shown that the longer a state has eliminated the asset limit, there’s a correlation to an increase in savings,” she said.

Another reason the tests are counterproductive, Black said, is that some low-income people don’t fill out the assets paperwork properly and are then denied benefits, even if they have meager assets and would otherwise qualify.

And once you've been denied, you have to wait three years to apply again. Better get self-sufficient fast, you leeches!

A former chairman of the Legislature’s Health and Human Services Committee said the rule is another way to “shame people from using the SNAP program” and “counterproductive” because it encourages people to spend down their savings.

“We have so many people who are food insecure and this is just another way to put more people in that category,” said Rep. Richard Farnsworth, D-Portland. “This is morally unconscionable.”

Even so, a lot of Republicans think it's the greatest thing ever, because they're sick and tired of how easy poor people have it with their princely $29 a week in food aid. Spokesman David Sorenson of the Maine Department of Health and Human Services explained in a written statement, “If these individuals have $6,000 in the bank, they should pay for their own groceries." Lord knows, $6,000 is plenty to live on if you have a medical emergency or your one old crappy car breaks down.

We imagine that Maine's next step will be to inspect food stamp recipients' homes for color TVs, refrigerators, and other luxury items. After that, perhaps some sort of brand or highly visible mark on their clothing could be used to shame poor people a little bit further so they'll clean up their act and stop being deadbeats.

Just in case you live in Maine and haven't yet dropped a line to Gov. LePage asking him to resign, you might want to go ahead and do that now. We're sure he's keeping close track of those requests.