Maine Gov. Paul LePage Will Starve All The Poor People Unless He Can Deny Them Cake 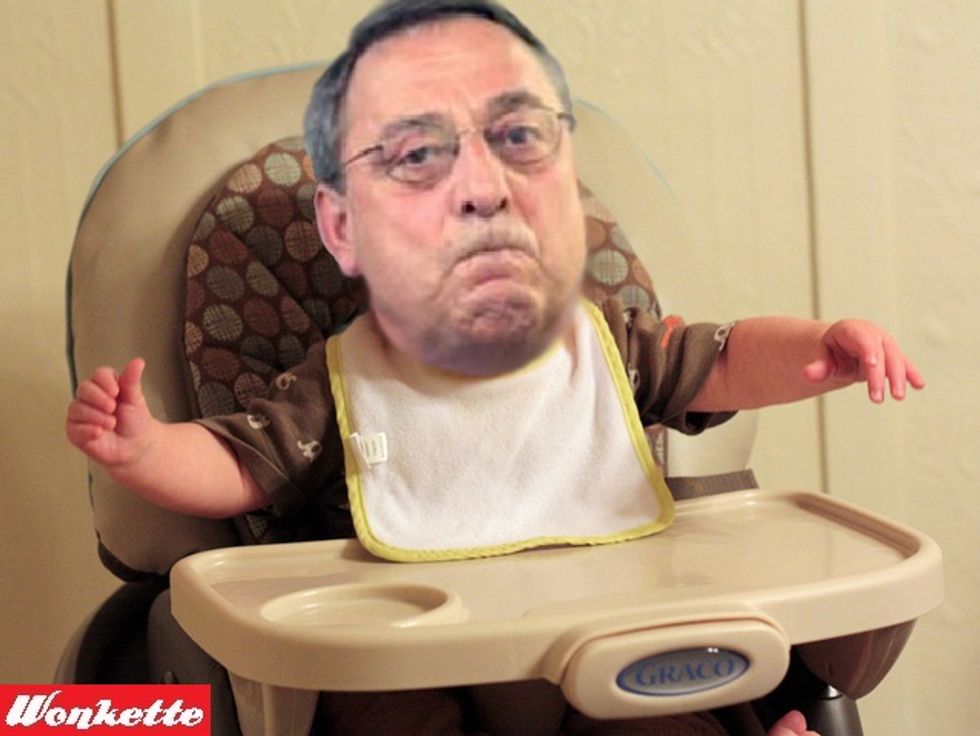 Oh for joy! Another chapter in the thrilling Maine Governor Paul LePage Is The Worst Human On Earth Chronicles! What's he up to this time? Is he suggesting that not letting people die from overdoses is basically like encouraging heroin use? Is he sharing his concern about black drug dealers coming into Maine and impregnating "young white girls?" Is he suggesting we bring back public executions with guillotines?

No! But, weirdly, this new thing also kind of reminds us of Marie Antoinette! Except that now Gov. LePage very specifically does not want poor people to have cake! And yes, we know she did not actually say that, but whatever, it is thematic.

In his continuing quest to crack down on the statewide menace of people on food stamps actually eating food, LePage has decided he would like to ban SNAP recipients from using food stamps to buy sugary food and drinks. When he first proposed this to U.S. Agriculture Secretary Tom Vilsack, he was told that this was not do-able. Why? Because although it sounds like a "reasonable idea" in theory, it is not at all a feasible thing to do. First, as the USDA website explains, "no clear standards exist to define foods as good or bad, or healthy or not healthy." Second, there are tons and tons of varieties of food products out there, and to spend all that time classifying them would require a lot of money and effort. Third, about 70 percent of all food stamp recipients only receive a portion of the maximum benefit and are thus expected to use some of their own money to buy food as well -- meaning that implementing such a program is not actually going to prevent anyone from getting a soda once in a while. So, as it turns out, there's no actual health benefit or monetary benefit to implementing such restrictions.

But LePage will not be moved! He wrote a second letter to Vilsack explaining that he will shut down the state's SNAP program if the federal government won't let him enact these restrictions, and the federal government will just have to run that themselves. Or something! It's rather unclear! But he's gonna do something about all those gross poor people guzzling Mountain Dew 24/7, and if he has to starve them to make that happen, then so be it!

The Obama Administration goes to great lengths to police the menus of K-12 cafeterias, but looks the other way as billions of taxpayer dollars finance a steady diet of Mars bars and Mountain Dew. I can think of only one reason why the federal government would refuse to eliminate junk food from the EBT menu: special interests. Only when Washington politicians stop kowtowing to powerful retail grocer and junk food manufacturing interests will American taxpayers have a respectable food safety net.

Meanwhile, Maine’s obesity rate has doubled in the past twenty years from 14 to 28 percent, and our incidence of diabetes has more than doubled, from 3.9 to 9.5 percent. Only 31 percent of Mainers eat the recommended amount of vegetables and only 36 percent eat the recommended amount of fruits daily. To compound the problem, in most cases we are paying for the consequences of these disturbing trends because most SNAP recipients also receive Medicaid.

Beyond the health effects of the federal government’s corrupt food stamp policy is the billions in wasted taxpayer dollars that buy candy and soda through a program that was originally designed to reduce hunger. Maine taxpayers see it every day at the grocery store and they are sick and tired of watching their hard-earned money going down the drain.

It’s time for the federal government to wake up and smell the energy drinks. Doubtful that it will, I will be pursuing options to implement reform unilaterally or cease Maine’s administration of the food stamp program altogether. You maintain such a broken program that I do not want my name attached to it. I suggest you start browsing the Maine classifieds for commercial real estate leases.

Wow! What a charming fella! He just cares so much about the health of Maine's poor that he's willing to put them all on a hunger strike until he gets his way! He and all the Maine taxpayers are just so tired of all these poor people they imagine are buying $29 dollars worth of Mars bars and Mountain Dew every week! And probably Pepperidge Farm cookies, because after all this is Maine we are talking about, remember. Just getting fat and unhealthy on the public dime! It just makes his gosh derned blood boil! Whatever happened to gruel, huh? Maybe if poor people were fed only gruel, they would all just go out and get jobs that paid a living wage instead of livin' off the dole!

Given that there's little data on what kinds of food people buy with food stamps -- one USDA study found SNAP beneficiaries no more likely to buy sugary drinks than low-income people not on SNAP -- it is totally possible, and, indeed, likely that this whole scenario only exists in Paul LePage's mind. And of course in the minds of people who pretend they can even tell when someone is paying with an EBT card in line at the grocery store. Who assume that because someone is poor that they are unable to make healthy food choices on their own. Who like to think of them as being bad, and greedy, and entitled, because that’s about a thousand times easier than thinking about how much it must suck to be in that position. Who do not so much fear that poor people are going to be unhealthy, but that they are not being sufficiently punished for being poor in the first place.

Personally? I'm ok with a poor person being able to have a candy bar once in a while, or buy a birthday cake for their kid, or have a ginger ale when they've got agita. Totally ok with that! Because too much misery when you're in that kind of situation is not actually the great motivator people like Paul LePage think it is.

It's probably unlikely that Paul LepPage will actually be able to do anything super gross to the state's food stamp program, but the fact that he wants to is incredibly disturbing. Even if he were in the right and this were not a deeply stupid idea to begin with, he would be punishing poor people in order to spite the federal government for not letting him have his way. That is a very evil thing to do, and he is a bad person, who should feel bad. Except he won't, because he's probably whatever the word is for a sociopath who is not at all charming.