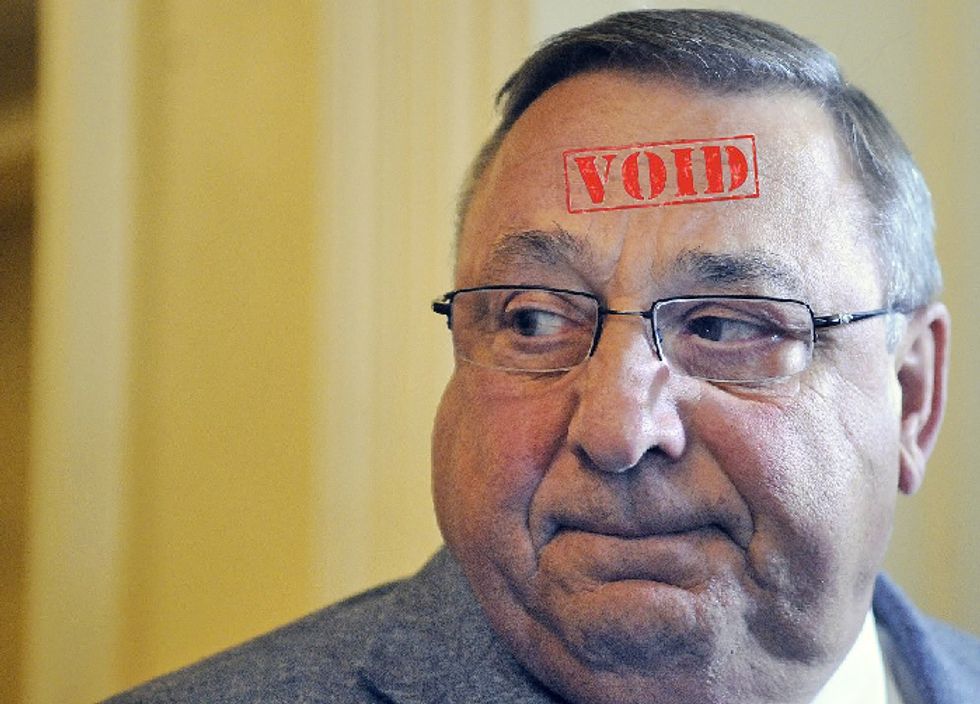 He has a year left in office to stew over this

Last night, Maine became the first state in the USA to expand Medicaid by ballot initiative, in a huge win for healthcare and a big black eye for Gov. Paul LePage, who had vetoed Medicaid expansion five times when the state legislature passed it. The initiative passed by a double-digit margin, with 59% voting for and 41% against. This makes Maine the 32nd state to choose Medicaid expansion, and sends an important message in a year when Republicans have been trying to kill off the Affordable Care Act and slash Medicaid.

Needless to say, Rs in Congress will refuse to hear that message, but other states are paying attention, especially Idaho and Utah, where the legislatures haven't expanded Medicaid but citizen groups are working to get initiatives similar to Maine's on the ballot next year. And not surprisingly, Gov. LePage is already making plans to fight the measure's implementation.

The successful referendum will bring health insurance to at least 70,000 Mainers who had previously not had it, and who fell in the cracks between eligibility for the existing Medicaid program and qualifying for subsidized individual insurance policies under the ACA. Proponents of the measure argued its passage would shore up the finances of rural hospitals and create up to 3,000 new healthcare jobs. Opponents, including LePage, have grumped that since the expanded Medicaid program also covers non-disabled adults, even if they don't have children, then it's nothing more than "welfare" and will cause the poor to become indolent, and probably encourage layabouts, wastrels, and ne'er-do wells, too.

“The truth is that Medicaid expansion will just give able-bodied adults free health care,” Mr. LePage said in a recent radio address. “We don’t mind helping people get health care, but it should not be free. ‘Free’ is very expensive to somebody.”

do not care about taking resources away from our most vulnerable Mainers – including our elderly and intellectually and physically disabled people -- just so they can give free, taxpayer-funded healthcare to adults who should be working and contributing to the cost of their own health insurance.

Of course, most non-disabled adults who qualify for Medicaid are working, but don't make enough to afford insurance, which simply proves how worthless they truly are.

Now that the measure has passed, LePage won't be able to veto it, but he's already planning to delay its implementationvia administrative fuckery. In a statement issued this morning, LePage again falsely claimed the measure would primarily help able-bodied adults who have no dependents, and vowed the expansion would not be implemented until the Legislature fully funds it at levels calculated by the state Department of Health and Human Services -- but also without tax increases or use of the state's rainy day fund.

The press release claimed Medicaid expansion would "cost taxpayers hundreds of millions of dollars," but made no mention of an estimate by the Legislature's Office of Fiscal and Program Review -- the state equivalent of the CBO -- that the annual cost to Maine would be $54.5 million, with the federal government kicking in $525 million a year.

The petty bastard will leave office next year, and will no doubt find work being an asshole in the private sector.

The initiative also sends a message to voters in the remaining 18 states that haven't expanded Medicaid: Get to work, people.

Yr Wonkette is supported by reader donations. Please click here to help us pay the writers, keep the servers running, and buy insurance for Yr Wonkstaff.