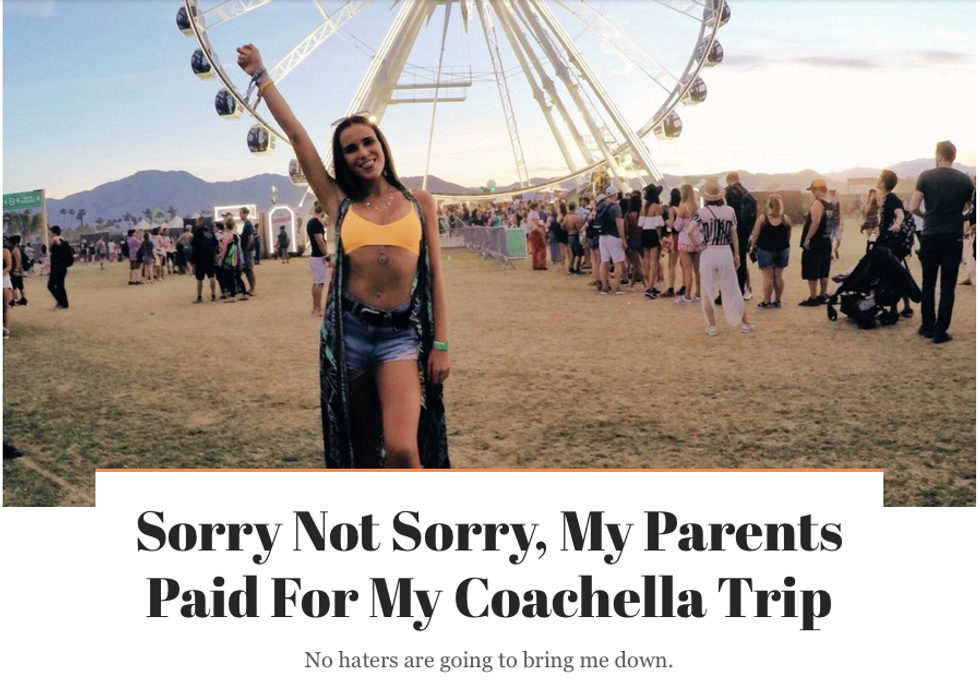 Back in early April, an article titled “You May Have Worn The Prom Dress With Him, But I Get To Wear The Wedding Dress,” from a site called Odyssey Online went viral, on account of how it was one of the worst things ever written. Later that month, another article from the site, "Sorry Not Sorry, My Parents Paid For My Coachella Trip," went viral for approximately the same reason.

In that article, writer Kaycie Allen called out all the "haters" who "shame" people whose parents bought them Coachella tickets, dolphins and Cadillac Escalades.

All my life, I’ve dealt with people commenting on me, mostly liking, but there are always a few that seem upset about the way I live my life.

One time, I was riding my dolphin out in Turks and Cacaos, (“riding” is the act of holding onto their fin as they swim and you sort of glide next to them. It’s a beautiful, transformative experience between human and animal and I really think, when I looked in my dolphin’s eye, that we made a connection that will last forever) and someone I knew threw shade my way for getting to do it.

Don’t make me be the bad guy.

I felt shame for years after my 16th birthday, where my parents got me an Escalade. People at school made fun of me (especially after I drove into a ditch...oops!) and said I didn’t deserve the things I got in life.

But this time, there was a twist.

The person who wrote that article was not Kaycie Allen of Syracuse University, but rather Chris Spies, a 28-year-old man living in Los Angeles. Spies had seen the "Wedding Dress" article, and decided to pitch them something ridiculous and poorly written, just to see if he could. Admittedly, many of us in the Chat Cave planned to do this as well, but we never ended up going through with it. So kudos to Chris!

Spies applied to join the Syracuse community, since he previously went to school there. Getting approved was even easier than he thought it would be.

"All I did is create a fake Gmail account," he said "They didn’t ask for any writing samples or any proof of any kind." [...]

Despite professional staff being involved, Spies said his post was published "without editing at all."

"It was purposely terribly written, both grammatically and attitude," he said. "There’s no reason that article should’ve ever seen the light of day."

It really shouldn't have, and if a single qualified editor had taken a look at it, it wouldn't have. As I mentioned in my previous article on Odyssey:

I used to edit personal essays on the regular at my previous job. Part of doing that involved saying no. It involved making sure writers didn’t come across as foolish and ensuring that they, and we as a site, were 100% behind what we were publishing together. I would have said no to these. And basically any other “article” on that site.

I also wouldn't let anyone walk around with toilet paper on their shoe, or tell them they are singing a song beautifully when they sound like Mrs. Miller.

The article was up for several days before it was taken down, on account of the attention the article received, speculation that "Kaycie" wasn't a real person, and Spies refusing to do a video chat with them. It was replaced with this statement:

Odyssey is a platform for real people to share authentic ideas. It has come to our attention that the creator of the article originally featured on this page may have joined Odyssey using false information, violating our terms of service.

After multiple attempts to engage with the creator and verify the information as true and correct, this content has been removed.

Part of the reason Spies was outed quickly as a fake was the requirement that writers share their work on social media and allow the site to post to Twitter for them. People noticed that "Kaycie's" profile was brand new, and became suspicious. This strategy is part of the reason Odyssey makes such a fuckton of money.

The site "employs" about 15,000 writers, all of whom are required to do this and also required to write one article a week. If, each time they write something, a few of their friends and social media followers click on it -- that's going to bring in a lot of clicks, regardless of the quality of the articles. Although individual articles average between 1,750 and 2,500 views (which is not a lot), the sheer volume they publish results in them getting about 30 million unique page views a month -- which is a whole lot. It's also a lot of money.

This would be very difficult to manage for a site that paid its writers and editors fairly. Odyssey, however, does not do that.

And, by using primarily college students, the strategy is supremely cost-effective. [former employee Emi] Gutgold, for example, was paid $20 by Odyssey to write a sponsored story for the dating app Bumble called "The Hottest Players In The Bumble Game," which included a mashup of photos alongside her cheeky commentary. These low rates allow companies to get a ton of advertising for their dollar. "We can produce 100 pieces of content for a brand for how much it costs them to get three pieces elsewhere," says Baker.

This is true. I think the least I've ever been paid to write sponsored content was about $300.

According to the most recent data I was able to find, the only compensation writers receive is $20, and that's only if their article gets the most traffic of their "group" (usually whatever college they are at) in a week. And the site is not at all shy about demanding their free work, according to one woman who used to write for them:

The summer before her junior year at the University of Rochester, Dominique Noriega, now a senior, learned about Odyssey through a Facebook post by a friend scouting new contributors for the platform. Excited by the opportunity to write, Noriega signed up. In the beginning she enjoyed it, but soon it became a slog. "The weekly [requirement] was a little dreadful because it really is such a cranking machine," she says. "You don't always have the time to make something that's good. You just have to make something."[...]

"It was just really transparent how much they wanted to get bigger. It took the individualism out of it," she says. What's more, she and the other student editors were flooded with emails from their content strategist checking in and urging them to turn around more stories, faster. "We were so drained by this man's persistent emails and demands. We couldn't do it any more," Noriega says. Last September, she and two other editors resigned in a published letter.

If it were any other kind of work, this would be illegal. There is nothing about this model that is not disturbingly predatory -- from the lack of pay to publishing writers without editing them or ever telling them, "No, this is very, very bad and we will not publish it as is. Do better." They are making tons of cash money and they can't even tell their unpaid workers when they have spinach in their teeth.

This is a shitty thing to do to people, regardless of whether or not they are participating in it voluntarily, and this company deserves a lot worse than just getting trolled.