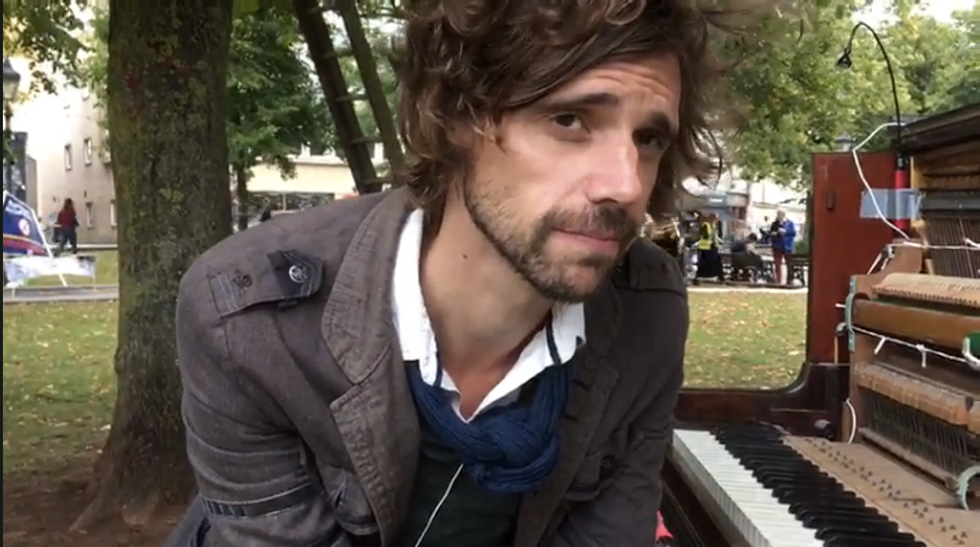 Four months ago, a woman made the poor life decision of dating 34-year-old musician Luke Howard. And who can blame her! He's all British and foppy and puppy dog eyed and what-have-you. It probably seemed like a great idea at the time. I totally get it. Hell, I once dated a drummer who lived in an ice cream truck. We all have our Luke Howards.

As these things go, the woman broke up with her Luke Howard. But, rather than crying in a bar while serenading her with the Smoking Popes "I Need You Around" as she tried to explain to him that she just can't really date someone who, when she is upset about having lost her keys, introduces her to people by saying "This is Robyn. Usually she's funny," he has decided to bring a giant piano into a park and play that piano until she agrees to take him back. Which, godwilling, will not happen.

THIS MAN IS FORREST GUMPING A PIANO TO PROTEST A WOMAN DUMPING HIM. I can't.

Luke Howard began playing his piano on College Green on Saturday morning, and said it was his ‘last throw of the dice’ to win back the heart of the girl who changed his life.

The 34-year-old from Bath said he didn’t know what the woman, who he wouldn’t name but referred to as his ‘Rapunzel’, would do when she saw he was doing the piano stunt, but he just wanted to ‘let her know just how much I love her’.

The pair recently split up after a four-month relationship, and the break-up has left him devastated.

Ugh. OK, hot dating tip for dudes -- grand "gonna get my girlfriend back!" gestures that seem super romantic in movies are actually horrifying in person. Literally anything John Cusack has ever done in any movie will get you a well-deserved restraining order.

“I don’t know what will happen. She’s a very organised person, very practical and I’m just trying to show her I’m really serious about us. It’s a kind of off-the-cuff thing, and I just want her to know how much I love her, to give us a chance rather than leave it there. I’m not ready to throw in the towel just yet.”

Oh, for sure. The best way to get a woman back who probably dumped you because you're an emotionally manipulative dickweasel who doesn't have his shit together is by sitting in a park and playing the piano until she agrees to take you back. Yes, this is certainly a plan that cannot fail.

By the way, this is all going on during what is supposed to be Bristol's biggest-ever protest, with more than 30 groups gathering to protest recent austerity cuts to a number of services, "including schools, libraries and community health services." Luke Howard says he didn't know about the protest, but hopes that the publicity from it will draw attention to his own, far more important cause of making his ex-girlfriend love him again.

Naturally, Luke Howard is turning this into a promotional campaign for himself and his piano playing, and has set up a big sign promoting Facebook and Instagram pages for his stunt. Those pages do not yet exist, of course, because Luke Howard is too busy being whimsical to get around to that.

Oh god, this girl needs to run. Let us all simply hope she does not have a pet rabbit.

Anyway, this is now your open thread! Recess!

Leave us a tip! Click below to donate to Wonkette!