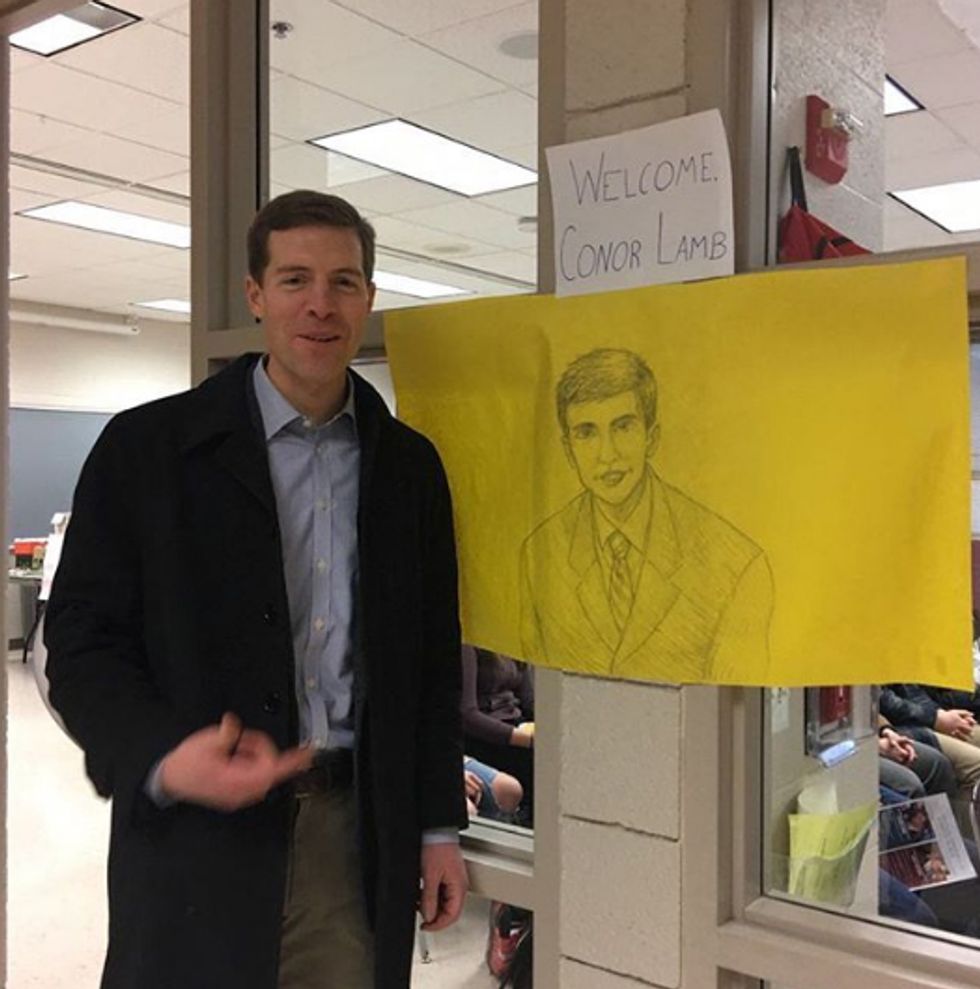 Good Morning and Happy Pi-Day Wonketariat! Here's some of the things we may be talking about today.

At stupid-early o'clock this morning, NBC called the Pennsylvania 18th for Conor Lamb. He squeaked by with just a few hundred votes!

British Prime Minister Theresa May announced "retaliatory measures" against Russia this morning; it will expel 23 Russian diplomats, and is calling an emergency UN Security Council meeting today. Russia has said that the UK will face "equal reaction."

Trump mumbled doubts about the UK findings, saying we need to get the facts straight, and we might condemn "whoever it may be."

The Democrats on the House Intel Committee released their own report on Trump-Russia fuckery, with Adam Schiff noting "significant evidence" of collusion between Trump's campaign and Russia, adding, "We cannot rely solely on Bob Mueller."

A US District Court judge thinks Paul Manafort is a flight risk seeing as how Manafort is loaded with sketchy Not American blood money and might actually spend the rest of his life in prison; the judge put Manafort on "24-hour-a-day lockdown" at home. LOCK HIM UP!

Ari Melber had the creator of a Roger Stone documentary on his show; he said Stone definitely tried to meet with Julian Assange. The documentary is on Netflix, it's not bad. [Video]

Infowars and Gateway Pundit have been hit with a lawsuit from a career diplomat who tweeted a video of the Charlottesville murder, only to become a target for conspiracy loons and Russian bots pushing their deep state bullshit.

For those of you keeping score at home, we missed a couple of people who were "YOU'RE FIRED." We got REXXON's Undersecretary of State for Public Diplomacy, Rob Goldstein, but then there was his Chief of Staff, Margaret Peterlin,and her Deputy Chief of Staff. I bet they think that's what "fruit of the poisonous tree" means. [Morning Maddow]

HR McMaster is ALSO rumored to be on the way out soon, and horrible, horrible people say John Bolton will replace him. God help us all.

If you believe in the palace intrigue coming out of Trump's White House, the head of VA Secretary David Shulkin is also on the chopping block, and Trump is considering replacing him with Rick Perry. In all fairness, Perry is a smart guy with glasses, he has killer dance moves, and he can DJ, which is exactly what the VA needs right now.

OF COURSE Trump's nominee for the US Sentencing Commission, William Otis, has a history of seriously fucked up and racist comments like, "blacks and Hispanics are more violent than whites," and the prison system isn't systematically racist because "Orientals stay out of jail."

Trump was talking to some Marines and started blithering about a space force. Normally pushed by Mike Pence, a separate military branch devoted to space-based warfare has already been derided as an overpriced clusterfuck by every shiny son of a bitch in the Pentagon.

The Air Force Exchange Service (AAFES), the quasi-Walmart on many military bases, has decided to lift its brief ban on high-capacity ammo magazines after soldiers of fortune started bitching and moaning about child murderers and liberals.

A federal appeals court has ruled that a Texas anti-sanctuary city law might be unconstitutional, overturning an injunction from a US District Court. Two words: Tex-Mex.

A teacher in California accidentally shot his gun during a safety class, injuring a 17-year-old student. The teacher was also the city's mayor pro tem, and a reserve officer with the city police department.

Some super-hardcore gun fetishists in Idaho are pissed that GOP state Rep. Tom Loertscher killed an even more insane "stand your ground" bill, telling reporters that the bill was unnecessary and could backfire on his caucus, adding, "I guess I stood my ground, no pun intended. I let them know that I didn’t feel intimidated by them at all."

A Russian state-news agency is citing Russian officials in a claim that the US is planning a false flag operation in Syria by arming militants with chemical weapons, then blaming an attack on Syrian President Bashar al-Assad. That way, according to Russia, the US can bomb Damascus and kill civilians, just like the fucking Russians.

A former enemy of Vladimir Putin, Nikolai Glushkov, was found dead in his London home. UK officials are not confirming any links to the attempted assassination of former double-agent Sergei Skripal, however Glushkov did have relationships with other Russian expats recently found dead.

Here's a little nice time about the first female Army Rangers from the Army Women's Summit on Capitol Hill yesterday.

Just days after a federal judge overturned a murder conviction that saw him imprisoned for 41 years, former Black Panther Herman Wallace passed away from liver cancer surrounded by supporters. Wallace was 71. (ed. -- Back in 2013. We are still sad.)

Stephen Hawking has died. NASA tweeted out a short video of Hawking addressing astronauts Rick Mastracchio and Koichi Wakata during their time on the International Space Station. Hawking was 76.

Later today students around the world will walk out of class to rally for gun control and in support of students in Parkland, Florida. The walkout is scheduled for 10 AM, and will last for 17 minutes.

We're 100% ad-free and reader-supported, and we need your help to stay that way!