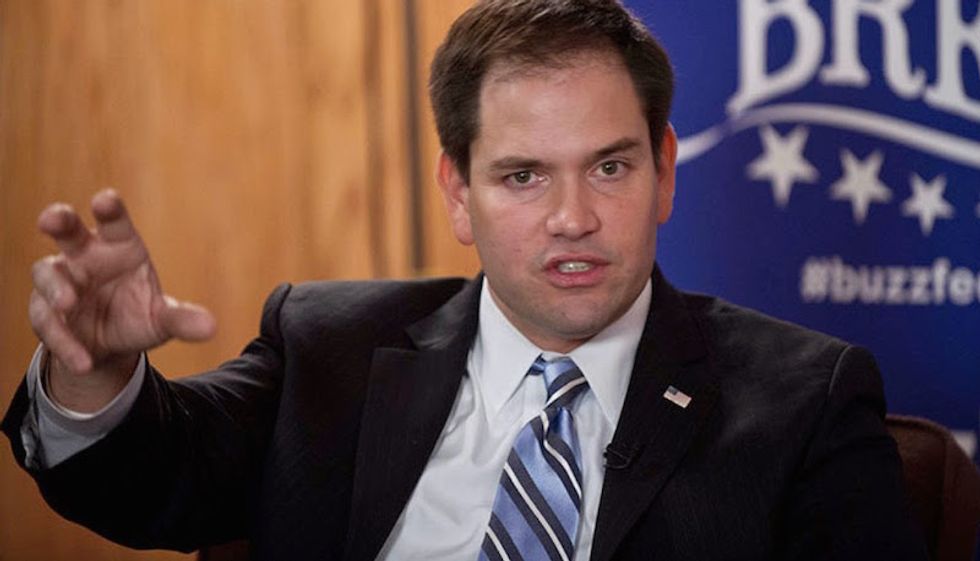 This weekend, Marco Rubio, the former GOP presidential contender everyone was trying to pretend was somehow less wacky than Donald Trump because he was better able to say horrible things in a pleasant sounding way, announced that he believed, deep in his little coal heart, that women infected with the Zika virus should not be allowed to have abortions.

The Zika virus, you see, causes microcephaly in children -- a condition in which the brain doesn't develop properly, resulting in a smaller than normal head. Children born with microcephaly often suffer from intellectual and developmental disabilities, seizures, hearing and vision problems, short life expectancy, etc. etc. Many years ago, parents unable to care for children with this condition would often end up selling them to circus sideshows, where they were displayed as "missing links," "Aztec children" or "pinheads" -- most notably Schlitzie Surtees, Pip and Flip Snow, and Zip the Pinhead. Why? Because really bad stuff happens to children when you force people to raise children they are not able to care for!

Which is why it would be not nice to call Marco Rubio a pinhead for expressing such terrible, terrible ideas! So we are not going to do that. Though the refrain of a certain Ramones song is running through our brains right now.

But we digress! Here is what Rubio had to say on the subject:

"I understand a lot of people disagree with my view – but I believe that all human life is worthy of protection of our laws. And when you present it in the context of Zika or any prenatal condition, it’s a difficult question and a hard one," Rubio told POLITICO.

Unfortunately, Marco Rubio only errs on the side of life when it's the life of a fetus! Once those microcephalic babies are born into the world, they can pretty much go screw. He really, really wants to repeal the Affordable Care Act, and if that happens? Well, the Zika virus and the microcephaly are going to be considered "pre-existing conditions" and it will be very hard for all those lives he cares so much about to get insurance and the medical treatment they will need throughout their short lives.

Democrats aren't too crazy about some of the provisions Republicans threw into the Zika funding bill. Isn't allowing Confederate flags in federal cemeteries an important part of fighting infectious disease?

Not to mention the fact that the GOP doesn't want to fund treatment for the Zika virus unless they also get to defund Planned Parenthood and also put slavery flags up in federal cemeteries!

Why? Because they love life. They just love life so very much.

"Obviously, microcephaly is a terrible prenatal condition that kids are born with. And when they are, it’s a lifetime of difficulties," he said. "So I get it. I’m not pretending to you that that’s an easy question you asked me. But I’m prolife. And I’m strongly prolife. I believe all human life should be protected by our law, irrespective of the circumstances or condition of that life."

Again, except after that child is actually born! And sure -- he says that it's not an "easy" question, but I think it is actually a very easy question for him. Because, like many Republicans and pro-lifers, he has a very romantic view of what forcing people to have children with severe birth defects would look like. He's not thinking of the parents that genuinely would not be financially able to give those children support, and who would, quite frankly, not be qualified to raise them in the first place. He's thinking these kids are all going to be born into the "Life Goes On" family, and they're all going to sacrifice together and learn a bunch of meaningful life lessons. But in reality, people with developmental disabilities are four to ten times more likely to be abused than those without -- because yes, there are a lot of people who simply cannot handle raising children with disabilities, and who -- quite frankly -- should not be doing that.

Joining him in this view is the always, uh, "interesting" Donald Trump surrogate Scottie Nell Hughes -- whom we last heard from when she was suggesting that Trump's great sacrifice was having to dump two of his wives for younger women. She explained on CNN this morning that women who have the Zika virus should not be allowed to have abortions because "birth defects are nothing new," adding that “[a]bortion is definitely not the answer for a way to sit there and cure this disease." Which we are pretty sure no one was suggesting it was.

It would be nice if, instead of railing against those who choose to have abortions rather than risk having a child with a severe birth defect like microcephaly, Republicans like Marco Rubio and Scottie Nell Hughes can instead turn their focus to those with developmental disabilities who have already been born and getting them and their families the resources and support they need. Or, I don't know, giving one single sort of crap about babies living outside the womb? That'd be nice!