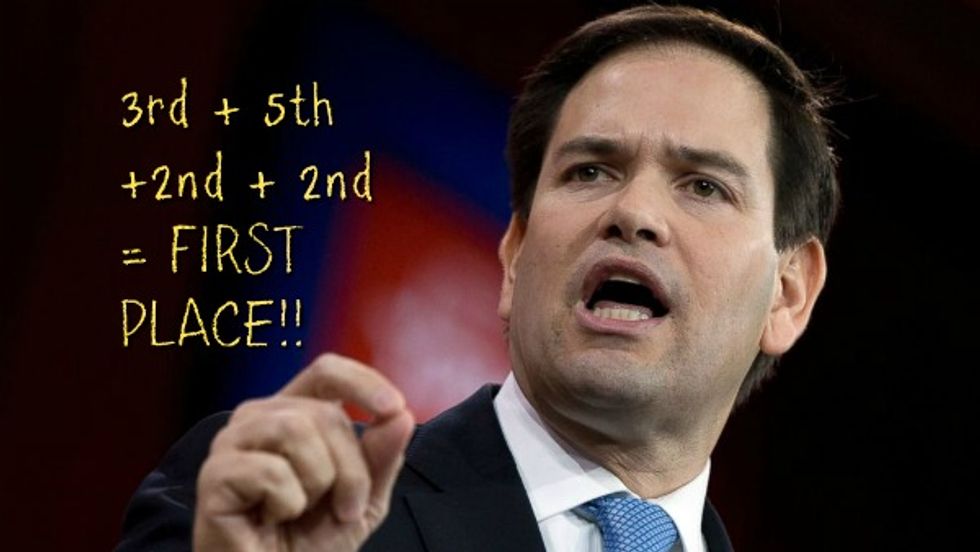 this New Math is so confusing

If you watched the Nevada results rolling in last night, you no doubt saw one million Republican strategists (looking at you, Nicole Wallace on MSNBC) trying to simultaneously explain how it was totally cool and great that Trump might win but also that Rubio was totally going to win even though he keeps, you know, not winning.

Yes, although Rubio has an incredibly distant 17 delegates to Donald Trump's terrifyingly robust 81 delegates, and even though he hasn't won a state yet, he's pretty sure that unique strategy of not winning any states will help him carve a path to the nomination.

"You don’t win the nomination by how many states you win," Rubio responded before adding that he will have to win some winner-take-all states in March.

We were going to go look up whether anyone has ever won the nomination by not winning states, but then we remembered we are not statistics nerds and we'll just wait for Nate Silver or one of his ilk to figure out whether this has happened or is even technically possible. Let's just ask Rubio how this strategy works instead, shall we?

He said that the anti-Trump voters are "divided up" among the remaining candidates.

"Until there’s some kind of consolidation here, you’re not going to have a clear alternative to Donald Trump, and the argument we’ve made is, I’m as conservative as anyone in this race, but I’m the conservative that can unify the Republican Party," Rubio said.

OK, Marco. Let's say that is true. Let's say you could pick up each and every one of the non-Trump delegates. If we look back at the four states that have voted thus far and give everybody's vote to you because fuck it, why not, this is a total fantasy anyway -- if we do that, you end up with 44 delegates to Trump's 81. While that is significantly less embarrassing than your current 17 delegates, 44 is not more than 81. Hell, 44 is not even remotely close to 81. Do they not teach math in Florida?

Listen, GOP. Twenty-five years of talk radio-fueled white nativist racist rage spawned your all-but-entirely-certain nominee, Donald Trump. No one wants Marco Rubio. We realize you thought he was your Obama and would be embraced by The Youth and The Browns, but it is just not happening. No one likes Marco. Everyone likes Donald. Maybe it is time to start sucking up to Trump in the hopes you'll get a VP nod. It is also for sure time to start brushing up on your math, because Jesus buddy, we know toddlers who could run these numbers better than you.