Mark Sanford Not Allowed To Fly Airplanes At His Children Anymore 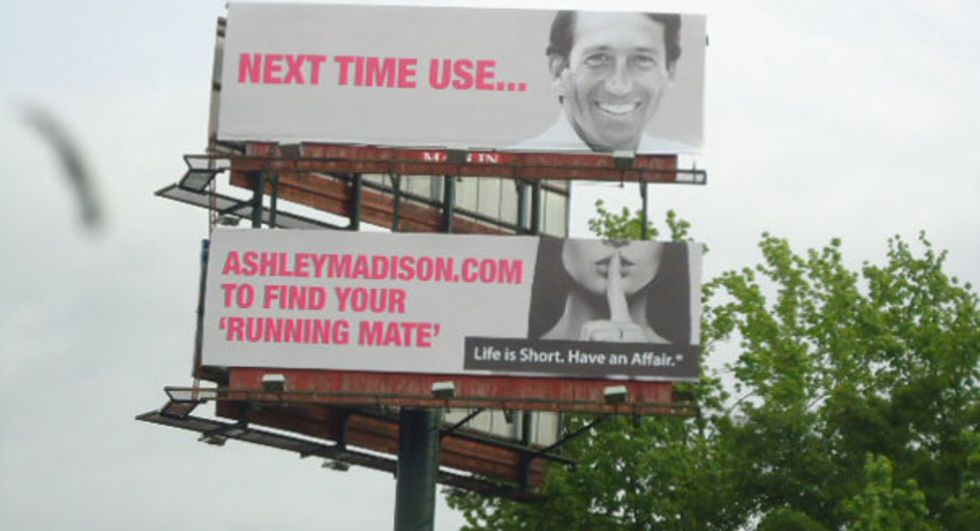 When Mark Sanford -- the disgraced former governor of South Carolina, wannabe-but-not-gonna-be congressman from the state's 1st Congressional District, and the world's most enthusiastic trail-hiker EVER -- isn'tlosing a debate to a cardboard cut-out of Nancy Pelosi, or losing a debate to his actual opponent Elizabeth Colbert Busch, or violating the terms of his divorce, he's trying to avoid flying airplanes at his children. Wait, what?!?!?

South Carolina Soapbox took a gander at Sanford's leaked divorce papers, and oooooh boy howdy, what the aerodynamic fuck has Sanford done to his kids?

The divorce settlement agreement — which was not included in the documents leaked — appears to contain a section specific to the Sanford family’s Coosaw Plantation, a sprawling property in Beaufort County purchased by Mark Sanford’s late father in 1965. One of the leaked affidavits references Paragraph II. B. of the divorce agreement, which provides that “at any time the children are at Coosaw, the parties agree that (1) no airplanes will be flown at children, and (2) the property will be insured at a reasonable level to satisfy liability claims.”

Er, um, do what now? "No airplanes will be flown at children"? Surely this must be the creative work of an overly ambitious attorney who simply wanted to cover every possible situation that someone on a regular diet of hallucinogens could imagine, and not based on, like, an actual incident, right? Right?!?!

These papers outline two other instances in which Mark Sanford allegedly failed to comply with the terms of the Sanfords’ divorce agreement:

No one knows what the "ill-defined incident" entailed, other than a reference in the totally-not-still-bitter ex-Mrs. Sanford's affidavit that "Provision 1 (the airplane provision) was violated “on or about January 15, 2011,” but we are guessing it is NOT something quaint and harmless like Sanford's little-known membership in the small but devoted community of "North By Northwest" re-enactors. Please, lord, can it be that and not that Sanford sometimes likes to unwind by flying airplanes at his children? PLEASE?

Because we know Sanford does unwind in some pretty unorthodox ways -- like, say, going AWOL from his governoring duties so he can jet off to Argentina to bang his mistress, which, it turns out, is actually the most harmless of his hobbies. For example. Or, according to these leaked divorce papers, "digging holes on the property with his hydraulic excavator to 'unwind.'" That is also a very strange hobby, but we wouldn't judge him for it because who cares if a man wants to dig holes on his own property -- except that his little hobby holes have led to the deaths of *, which is not even remotely funny and we aren't going to make any jokes about it, but it certainly explains why Jenny Sanford is genuinely concerned about the safety of her children when in the care of their father. *(Actually, only one child died in one of his hobby holes; a second child drowned in his pool. So maybe he should just stay away from all holes with water in them.)

And speaking of Mr. Father of the Year, who is SUCH a concerned dad that he will shamelessly violate the terms of his divorce agreement to trespass on his ex-wife's property so his teenage son won't have to watch TV alone ... What was this other thing? This thing about being a deadbeat dad and "violating the child support agreement"? Yeah, that thing. Nice parenting there, Mark. Real nice. Your 14-year-old boy can't watch TV alone, but your kid in college can pay his own tuition? Father of the year, this guy.

No wonder everybody -- from the National Republican Congressional Committee, which decided to not give any more money to Sanford, to the "we help you have extramarital affairs on the down low" website AshleyMadison.com -- can't wait for Sanford to lose already and quietly ride off into the sunset. On his beloved Appalachian Trail, of course.