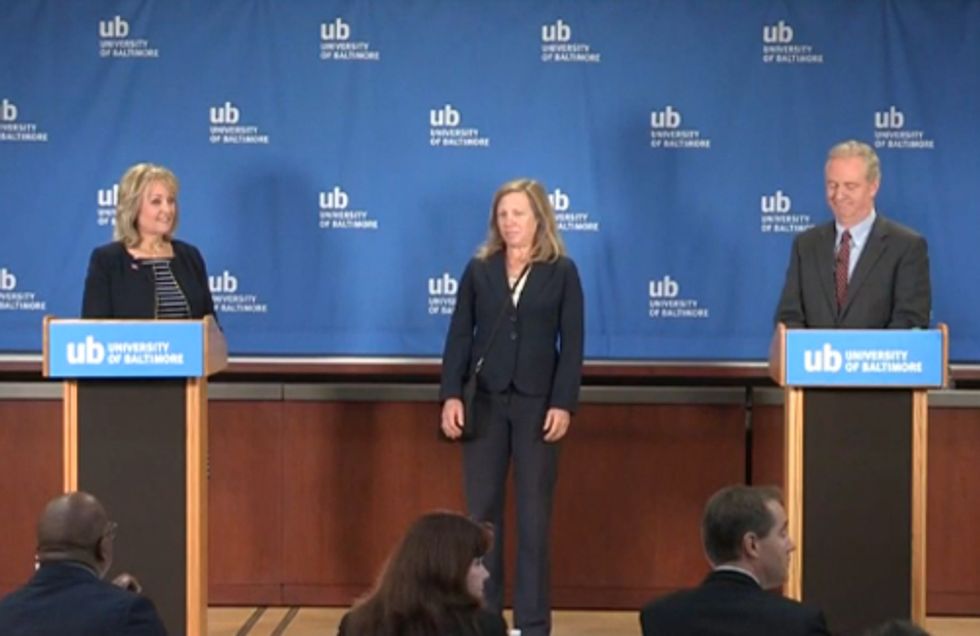 The start of a debate between U.S. Senate candidates in Maryland was delayed just a little bit this morning when Green Party candidate Dr. Margaret Flowers took the stage and stood between Republican Kathy Szeliga and Democrat Chris Van Hollen, insisting that she be allowed to take part anyway, because democracy and freedom and stuff. And really, why not?

As the debate at the University of Baltimore was about to start, Flowers strolled up the steps to the stage and calmly announced, shouting a bit so she could be heard, "It's not a full discussion if you don't have all viewpoints included, and I'm a valid candidate on the ballot, so I appreciate your allowing me to be here today." She then smiled and stood expectantly for a moment, waiting for the debate to start. After all, she thanked them, and the other two candidates had been introduced, so let's get on with it. A UB dean asked her to please step aside so the debate could start, and she repeated that she's a real candidate who needed to be included since she's running a statewide campaign and can add a lot to the discussion.

You say you're a public university and you want to educate the public, but without having a full public discussion, that doesn't actually happen. How does it serve democracy or serve the public if I'm excluded from the discussion, when I'm on the ballot?

Sadly, her argument didn't seem to carry much weight with the uniformed police officers who escorted her from the stage as she continued to protest, "I'm Dr. Flowers and I'm a candidate for US Senate in Maryland, and this is how I'm treated?" We have to admire her optimism -- and considering how little attention Senate debates get, she probably garnered more attention and name recognition by being forcibly removed than if she'd been invited. Lord knows we wouldn't be writing about the debate otherwise.

Szeliga, a member of the House of Delegates, seemed happy to make room for one more, and motioned for a third podium to be brought out onstage, but by then The Man had already removed Flowers, still shouting, from the stage. WBAL reporter Kate Amara Tweeted that the UB dean explained to the crowd that Flowers hadn't met the minimum of 15% in statewide polls to be included in the debate, and that the rules were known to all the candidates in advance.

The debate was delayed further as, when the moderators tried to start again, audience members started interrupting as well, only to be removed by security. Amara noted that Dr. Flowers "was included in Goucher Poll & Wash Post poll: low single digits." And then, eventually, the debate got going.

Fun Fact! This isn't the first time Flowers has invited herself into a debate! Back in March, she also walked onstage at a primary candidate forum sponsored by the Baltimore Jewish Council and Goucher College, to which she had initially been invited and then disinvited.

Flowers was disinvited from that one because she hadn't met the polling minimum of 5% in her party, but she pointed out that there wasn't any statewide polling for Greens, but she was pretty sure she was leading at the time anyway. The initial invitations hadn't included any polling threshold, either, so if anything, she probably had a better case that time than today.

Maryland Has Two Awesome Democrats Running For Senate. Can We Have Both?

Since Maryland is an overwhelmingly blue state, Van Hollen is likely to win the Senate seat; be looking for Dr. Flowers to show up at the Congressional swearing-in ceremonies in January 2017 to insist that her voice was never heard, so she and Van Hollen should debate at least one time before he takes his oath of office.