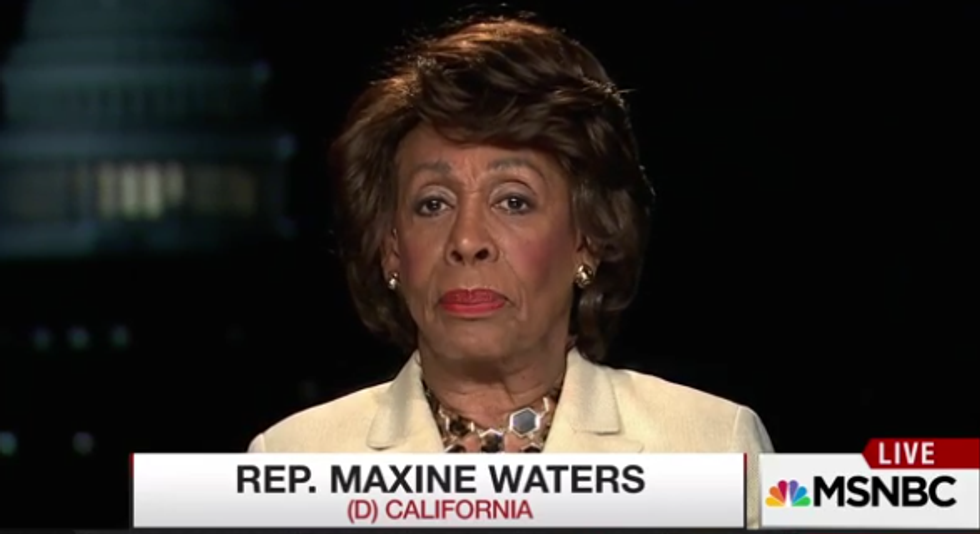 On Tuesday, we (facetiously) worried that California Rep. Maxine Waters (D-Badass) was going to cry a million rivers and listen to emo songs all night long, because Bill O'Reilly racistly and sexistly made a racist and sexist comment about how he couldn't even focus on what she was saying, because he thought her hair was funny. What would she ever do in the face of a sick burn from Bill O'Reilly, who has never made a racist sexist comment ever? He certainly doesn't have any sort of history of sexual harassment or (allegedly!) beating up his wife or anything like that. He's an upstanding gentleman, that BillO, and he definitely has no use for people who make ribald remarks to ladies about falafel thingies.

Well, it doesn't appear that Congresswoman Waters was particularly affected by O'Reilly's racist and sexist comment, and when Chris Hayes asked her about it Tuesday night on the MSNBC, her attitude was equal parts "BUT YET SHE PERSISTED" and "FUCK IT, WE'LL DO IT LIVE!" Here is your video and transcript of Maxine Waters being badass, for your enjoying:

.@MaxineWaters on Bill O'Reilly comments: "I am a strong black woman and I cannot be intimidated" #innershttps://t.co/B1vRE4nelt

I'm a strong black woman, and I cannot be intimidated, I cannot be undermined, I cannot be thought to be a friend of Bill O'Reilly or anybody, and I'd like to say to women out there everywhere: Don't allow these right-wing talking heads, these dishonorable people, to intimidate you, to scare you. Be who you are, do what you do. And let us get on with discussing the real issues of this country. Bill O'Reilly and Roger Ailes have no credibility. They have been sued by women. They have had to pay millions of dollars out in fines for harassment and other kinds of things. And so we know about that checkered past.

MAXINE WATERS IS FINISHED WITH YOU, BILL O'REILLY, THEREFORE YOU NO LONGER EXIST.

Apparently the controversy was enough that bigwigs at Fox News inveighed upon O'Reilly the need to apologize, so he sort of did that on his show Tuesday night. He vaguely said he was sorry and that she "should not be marginalized," and admitted he did a cut-down about her hair, concluding, "That was stupid. And I apologize." It's important to note that he was kind of tee-hee-ing to himself during his "apology."

O'Reilly continued by saying Waters isn't good at explaining "what's bothering her about President Trump," just after he played a clip of her standing on the House floor saying what's bothering her about President Trump. (Guess he was distracted by her black lady hair again.) He also said he really wants her to come on "The O'Reilly Factor," but she is too scared, due to how Bill O'Reilly The Loud Person will win an argument with her by shouting like the weak man's idea of a strong man he is.

At around the same time O'Reilly was delivering his remarks, Yr Humble Wonkette got an email from Fox News with his OFFICIAL apology, apparently because they really felt they needed to do some PR around this! It stated that we MUST attribute the apology to O'Reilly and that we MUST include the entire quote. So we will reprint it in full, hidden in this list of Wonkette headlines about what a piece of shit human being Bill O'Reilly is:

And that, motherfuckers, is how you print Bill O'Reilly's apology in a Fair And Balanced way.

Let's not let BillO have the last word, and instead give it to Hillary Clinton, who spoke last night (looking all punk rock!) about the sexist indignities women, especially women of color, have to endure on a daily basis. She specifically references badass Maxine Waters and also badass reporter April Ryan, who got sexisted by White House Press Secretary Sean Spicer on Tuesday. It is a very good video!

In conclusion, and as usual, STFU, Bill O'Reilly.