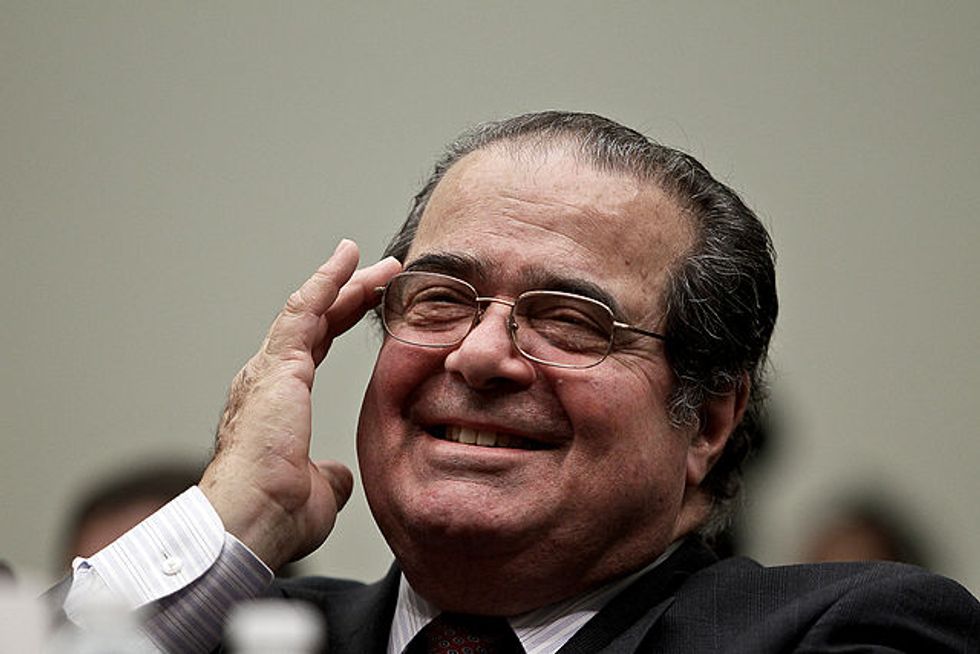 Just when we thought the Saga of Dead Scalia couldn't get any weirder, news has broken that the Supreme Court justice and aspiring Nazgul died while on a hunting excursion with pals from a secret society. But what exactly were they (and presumably he) hunting? Was it, perhaps ... THE MOST DANGEROUS GAME?!

OK, Antonin Scalia was PROBABLY not pillow-murdered at Cibolo Creek Ranch in West Texas by the vengeful spirit and/or relative of a human being he had callously hunted for sport as part of the Order of St. Hubertus. It was more likely some sort of specially imported endangered species, like the world's most adorable emperor penguin, or a pregnant panda that knew the cure for lymphoma.

Sadly, the truth is likely far more banal. "Secret Society" is usually rich people code for "club ludicrously wealthy dudes use to try to fill the gaping hole where their humanity is supposed to be." Sometimes their activities include sticking their balls in the mouth of a dead pig, though whether that's a regular activity of the Order of St. Hubertus is something we can neither confirm nor deny, other than to say Antonin Scalia definitely enjoyed dangling his manberries into the maw of the dead protagonist from Charlotte's Web (ALLEGEDLY!).

Here's what we do know: St. Hubertus is a No Girls Allowed hunting society that dates back to Austria in the 1600s. They have a Latin motto (which is a requirement for these things) that translates to "Honoring God by honoring His creatures," an exhortation they apparently accomplish by shooting His creatures with armor-piercing bullets until they are dead.

It's important to note that it's not certain whether Scalia actually belonged to the Order of St. Hubertus or if they just liked his spiffy robe and sociopathically regressive politics enough to do kegstands with him because they all happened to be in the same place at the same time. But Scalia was a known hunting enthusiast; he and Elena Kagan apparently used to go shoot furry woodland creatures regularly (we're assuming this is because she lost a bet with Ruth Bader Ginsburg at some point). Furthermore, Scalia had traveled to the ranch by private plane with lawyer C. Allen Foster, who has been confirmed as a leader in some capacity with the Order.

It would be irresponsible for anyone to speculate further, so please feel free to do so in the comments, which we do not allow.