Maybe Donald Trump Should Pay To Repair All These Mosques 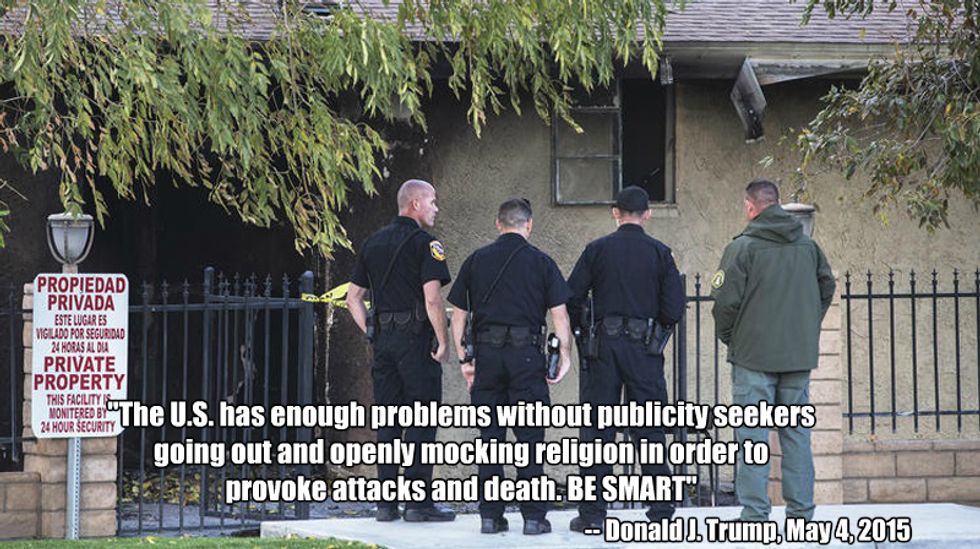 May 2015 was like a whole century ago in Trump Time

It's been a busy seven days for people who want to protect America from the Muslim Threat! Since Donald Trump announced his completely impossible policy proposal to ban Muslims from entering the USA on December 7, there have been at least 19 attacks (or threatened attacks) nationwide on mosques, Muslim-owned businesses and homes, and on individual Muslims. Now, we should note that several of those attacks occurred on December 7, so maybe they were merely the work of Patriots avenging the San Bernardino shootings on their own, completely free of Trumpian influence.

[contextly_sidebar id="jE6HvX0yELT076SQCMPCU5Dg6bzF596S"]In California, the Islamic Society of the Coachella Valley was apparently firebombed Friday afternoon while five or six people were inside. In Phoenix, Arizona, some brave patriots shattered windows overnight Wednesday at the Islamic Cultural Center, the site of May's armed protest against the dangers of Islam.

Happily, Donald Trump can't possibly have inspired the death of Hamza Warsame, a 16-year-old Somali-American high school student who either fell from or was beaten and thrown from an 8th-floor balcony at Seattle Central College. That happened on December 5, so Donald is in the clear, hooray.

On Friday night, 23-year-old Carl Dial was arrested and charged with arson, burglary, and hate crimes for the Coachella Valley mosque fire. His father, John Dial, told NBC News that he had no plans to help with his son's $150,000 bail: