Maybe Nashville Shooter's Dad Shouldn't Have Returned His Guns. It's A Thought. 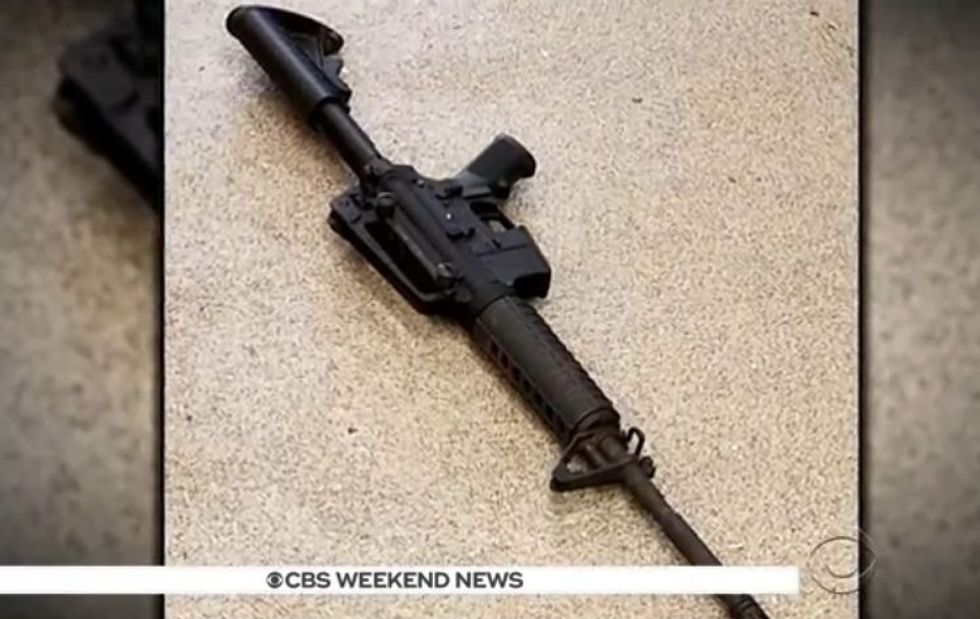 At 3:19 Sunday morning, a guy wearing only a jacket got out of a pickup in the parking lot of a Waffle House restaurant in Antioch, Tennessee, a suburb of Nashville, and started shooting at people. He killed two in the parking lot, shot at the windows, then went inside the restaurant and kept firing, killing two more people and leaving two more with critical injuries. After being stopped by a customer at the Waffle House, the shooter threw off his jacket and fled naked from the restaurant; he apparently went back to his apartment, put on some pants, ran for some woods, and is now the subject of a huge manhunt.

Our first thought when we heard this story on the radio yesterday was that we've reached a point where a mass shooter has to go naked to distinguish himself from all the others.

The good guy in this story, James Shaw Jr., didn't use a gun to stop the shooter, 29-year-old Travis Reinking; instead, after he was grazed by a bullet, Shaw wrestled the AR-15 style semiautomatic rifle away from Reinking as the shooter was reloading and threw it behind the counter, burning his hand when he grabbed the hot barrel of the rifle. At a presser yesterday, Shaw denied that he was a hero, and said he had no combat training other than wrestling his daughter into bed when she wanted to stay up. He also said that, in a sense, he'd acted selfishly -- he just wanted to save himself, and in the process saved the lives of everyone else in the restaurant. In other words, the best kind of hero.

Of course, he wasn't a good guy with a gun, which seems awfully rude to the NRA. Shaw's heroism, however, is also far more common than the mythical NRA scenario: A 2014 FBI review of 160 active shooting incidents found that in 21 of the instances, unarmed citizens tackled or otherwise restrained the shooters. Only five incidents ended after an exchange of fire with "armed individuals who were not law enforcement personnel" -- and of those, four out of the five armed heroes were armed security guards.

After the arrest, law enforcement officials in Tazewell County, Illinois (where they get you with stun guns really good), revoked Reinking's gun permit and seized four weapons from him:

According to a report from the Tazewell County Sheriff's Office, authorities seized a Kimber 9mm handgun, a Bushmaster AR-15 style rifle, a CZ-USA .22-caliber rifle, a Remington 710 and random ammunition. The AR-15 style rifle listed was the same weapon used in Sunday's Waffle House shooting[.]

Eventually, the police gave the seized guns to Jeffrey Reinking, Reinking's father, and told him not to return them to his son. Guess he didn't get the message, or wasn't about to kowtow to gun-grabbing jackbooted gun grabbers, because he gave all the guns back to his son. That seems an especially unwise choice given that even before the younger Reinking went off to Washington, he'd already been behaving strangely, according to CNN: In May 2016, Reinking's parents called 911 to ask for help with Travis, who was talking about killing himself and said that Taylor Swift was stalking him. In an incident report, an officer wrote, "Travis is hostile toward police and does not recognize police authority. Travis also possesses several firearms," which certainly has a sovereign citizen vibe to it. Despite the talk of suicide, Reinking apparently was able to keep his guns, because how else could he defend America against its enemies?

In 2017, there were also a couple of reports to police about Reinking's erratic behavior about a month before he ran off to DC; in one, an employee of his father's business -- Travis had an apartment above the office -- called police to say Reinking had come out of the apartment carrying a rifle and wearing a pink dress; he yelled at the employee, "Is this what you fucking want?" then tossed the rifle in the trunk of his car and drove off. Near the same date, in another incident, Reinking showed up at a public swimming pool wearing "a pink women's housecoat," then

dove into the pool and took off the coat and swam around in his underwear. When he got out of the pool, he shouted at lifeguards that he was a man and exposed his genitals to them, the report states.

The rifle stayed in the vehicle and no one at the pool asked to press charges, the officer said in the report. "This is an informational report showing the state of mind of Travis Reinking," the report said.

CNN reports that the bizarre behavior continued after Reinking's arrest at the White House. Two weeks before the county came to take his guns, Reinking had another weird encounter with law enforcement: He drove up to a Tazewell County sergeant's patrol car and said he wanted to report a crime.

Reinking told the sergeant that people were "tapping into his computer and phone" and barking like dogs outside his home, according to an August 11 incident report. He said he felt like he was being watched and that people were baiting him into breaking the law, the report states. He told the officer that it all started after he began writing to Taylor Swift, according to the report.

It's not clear if he told his parents about that one; later in the fall of 2017, he moved to Nashville and worked in construction.

Also, some complete speculation, since it would be irresponsible not to: It's worth noting that online white supremacists had been meming wildly about Swift as an Aryan goddess well before the summer of 2016. No hard evidence yet that Reinking was involved with white supremacy or online forums that spread the Taylor Swift nonsense, but it's something to keep an eye out for as the story develops.

Clearly, this was a seriously messed up person, so get ready for the usual talk of the need to make sure mentally ill people don't have guns, without, of course, any actual action to tighten background checks or provide better mental health services. And certainly without taking any steps to reduce the number of high-powered murder machines out there. All we really need to do is stigmatize mental illness some more -- while ignoring the data showing that most mass killers aren't mentally ill -- and we'll feel like we've accomplished something.