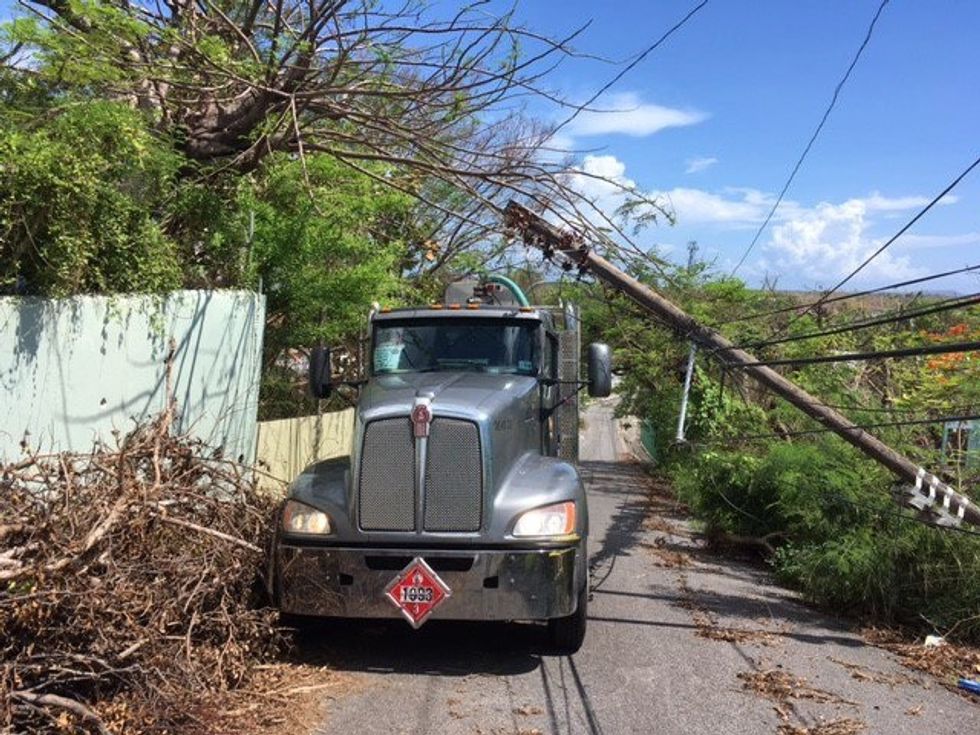 Electricity is our friend. Fishy grifters, not so much

Now that the media have been shining a light on that hinky-looking $300 million no-bid contract to rebuild Puerto Rico's electrical grid, more questions are being asked 'bout how the contract was awarded, Congress is looking at an investigation, and Puerto Rico's financial oversight board is talking about installing an emergency manager to run the territory's electrical utility, because disaster recovery probably shouldn't create so much What The Fuckery.

As we noted the other day, the company chosen to do much of the work, Whitefish Energy, is a couple of guys from Interior Secretary Ryan Zinke's hometown, Whitefish, Montana, whose previous experience with big projects was upgrading 4.8 miles of transmission lines in Arizona. Zinke and Whitefish insist it's purely coincidental that they know each other, and that Zinke had nothing at all to do with the decision by the island's electric utility to choose Whitefish. Members of Congress would like to know more about how all that happened, please:

House and Senate Democrats called for an investigation into the utility’s agreement with Whitefish Energy. Sen. Lisa Murkowski (R-Alaska) pledged to examine the grid-rebuilding efforts at an upcoming hearing of the Committee on Energy and Natural Resources, which she chairs [...]

It doesn't help that the amounts of money involved appear completely insane: Whitefish is getting

In its defense, Whitefish emphasizes that much of the work involves installing huge transmission towers, by helicopter, in remote, mountainous areas, not just sending workers out in bucket trucks in developed neighborhoods, as in Florida or Texas, where utilities from all over the place sent workers in a "mutual aid" arrangement that's more typical for disaster recovery. Also, Whitefish has to carefully insulate every pair of their workers' gold-plated coveralls to prevent electrocution.

“The contract should be voided right away, and a proper process which is clear, transparent, legal, moral and ethical should take place,” Cruz said.

In response, Whitefish took to Twitter (you know WHO ELSE does that? OK, fine, almost everybody) with a statement saying it was disappointed and hurt and Cruz made them cry bitter tears of not being appreciated:

Cruz wasn't about to sit still for a company that's getting big bucks telling her that she needs to shut up and be more appreciative of the nice subcontractors who have come to help her simple island people, Tweeting in reply, "You would think I am the only one in the world that has commented on this. What is it about women having an opinion that irritates some?" and "If @WhitefishEnergy feels that asking for transparency is ”misplaced”, what are they afraid we will find?"

We then began to suspect Whitefish's twitter account had been hacked by the president of the United States:

Again, Cruz wasn't having it, and Whitefish continued to get shirty, because if the locals are going to question their integrity, maybe they'll just take their subcontractors and go home.

After the resulting, and completely predictable, internet shitstorm, someone at Whitefish apparently scrounged up an old copy of their Business Communication Today textbook and crafted a statement insisting they want to help P.R. but are no good at P.R.:

While that fuck-tussle was playing out in the aether, there were more reports of possible fuckery in the contract -- including a Daily Beast piece detailing that by pure coincidence, one of Whitefish's financial sugar daddies happens to be a YOOGE donor to the RNC and many Republican candidates, including the Trump campaign. Needless to say, Whitefish vigorously denied any special favors were involved in the contract, no, no, no.

With whiffs of possible corruption wafting around like the stench of rotting hurricane debris, the board appointed to oversee Puerto Rico's financial crisis said Wednesday it plans to appoint one of its members, retired Air Force colonel Noel Zamot, as an emergency manager to run PREPA and make sure no more shady deals are made. That didn't go over so well with the office of Gov. Ricardo Rosselló; while the governor is launching an investigation of the contract, spokesperson Carlos Mercader said appointing an emergency manager would be beyond the financial board's authority.

Yr Wonkette has mixed feelings on the emergency manager thing -- it sure looks like PREPA management was either incompetent or corrupt in making that deal, and Crom knows there should be more than 300 people restoring power in Puerto Rico (Florida and Houston had thousands of utility workers). But when we hear "emergency manager," we also think of Flint, Michigan, and we're pretty sure the last thing the people of Puerto Rico need right now is lead coming out of their electric sockets.

Wonkette is hinky-deal free! Click to keep us that way!