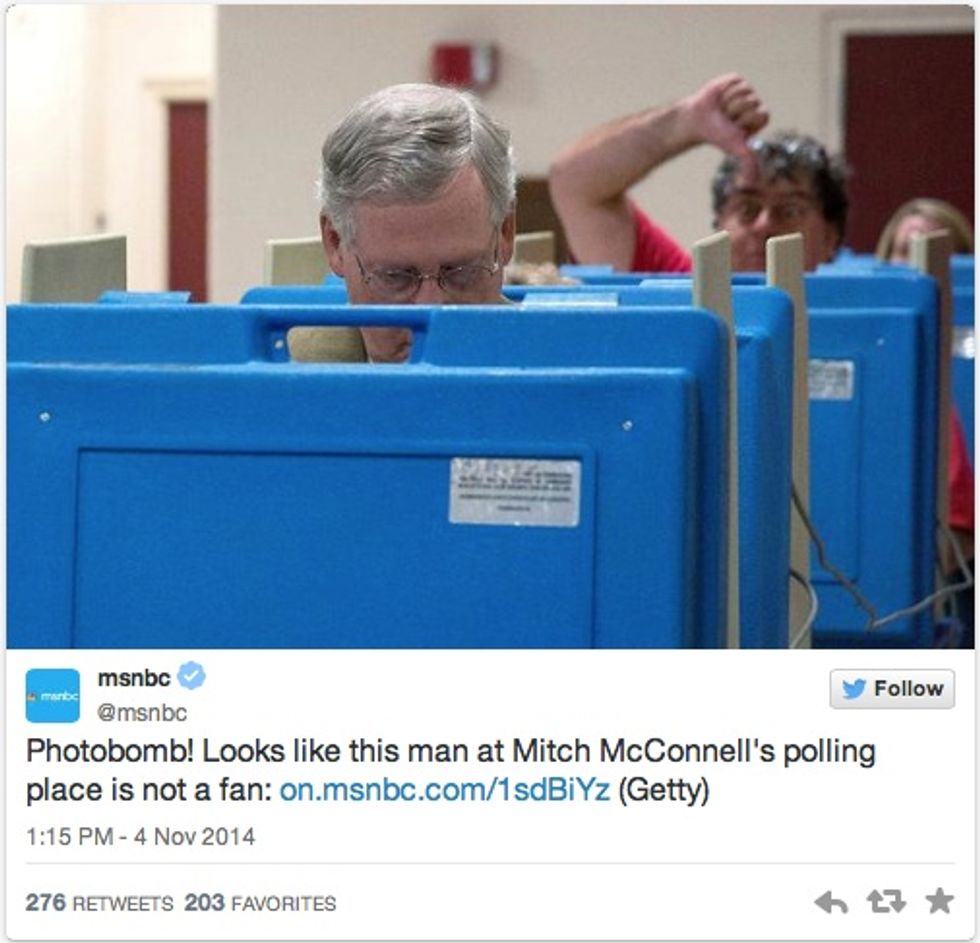 Somewhere in Washington, DC, there is probably something with the name of every Senate Majority Leader carved on it, like a marble bust or some old Roman Empire shit like that. Tonight, Mitch McConnell just got a lot closer to putting his own name on that hypothetical thing, as the major networks have called him the winner in his race against sexy, flawed Alison Lundergan Grimes.

Whatever, the gavel's not important and McConnell can probably afford one if he wants to have his own, which he probably does, the nerd. What's important is GOOD LUCK, SUCKER! No really, good actual luck, because for the next two years, Mitch McConnell is going to be normal good America's first line of defense against Ted Cruz and his merrye bande of dicke-waddes.

In an interview with The Washington Post published Sunday, Cruz refused to pledge his support to McConnell, the current minority leader in the Senate, and outlined what he believes should be the chamber's priorities. […] He also hopes a Republican Senate will "pursue every means possible to repeal Obamacare," just as the GOP-controlled House has tried more than 50 times to dismantle the health care law.

McConnell's problem here is that the base of his own party hates him. Here's a typical RedState/Erick Erickson headline about McConnell, from 2009: "Mitch McConnell Lost His Testicles and Now Infects the Senate GOP With a Cancer". Wow, that's pretty fucking gross even by our standards.

See, what's going to happen is the following: Every time McConnell tries to resolve a contentious issue using the "old politics" of give-a-little, get-a-little horse trading, the base will scream that he's an establishment squish Kenyan anti-colonial Marxist coward and ideate upon his bloody dismemberment in the comment sections of even worse blogs than this one. This will embolden Ted Cruz and other ambitious GOP "personalities" to be even more intransigent and shitty toward Mitch McConnell. We've seen this play before, back when it was called "A Streetcar Named John Boehner," by Kentucky Walmart.

Say Justice Breyer retires next year. McConnell knows that just refusing to vote on a replacement indefinitely is politically untenable and will damage the GOP brand (and the Mitch McConnell brand). But allowing a vote to confirm the next Sonia Sotomayor? Can you even imagine?

So we say again, good actual luck to Senate Majority Leader Mitch McConnell! May your time in office be brief and unremarkable.