McConnell Retreats To His Shell. Wonkagenda For Wed., June 28, 2017 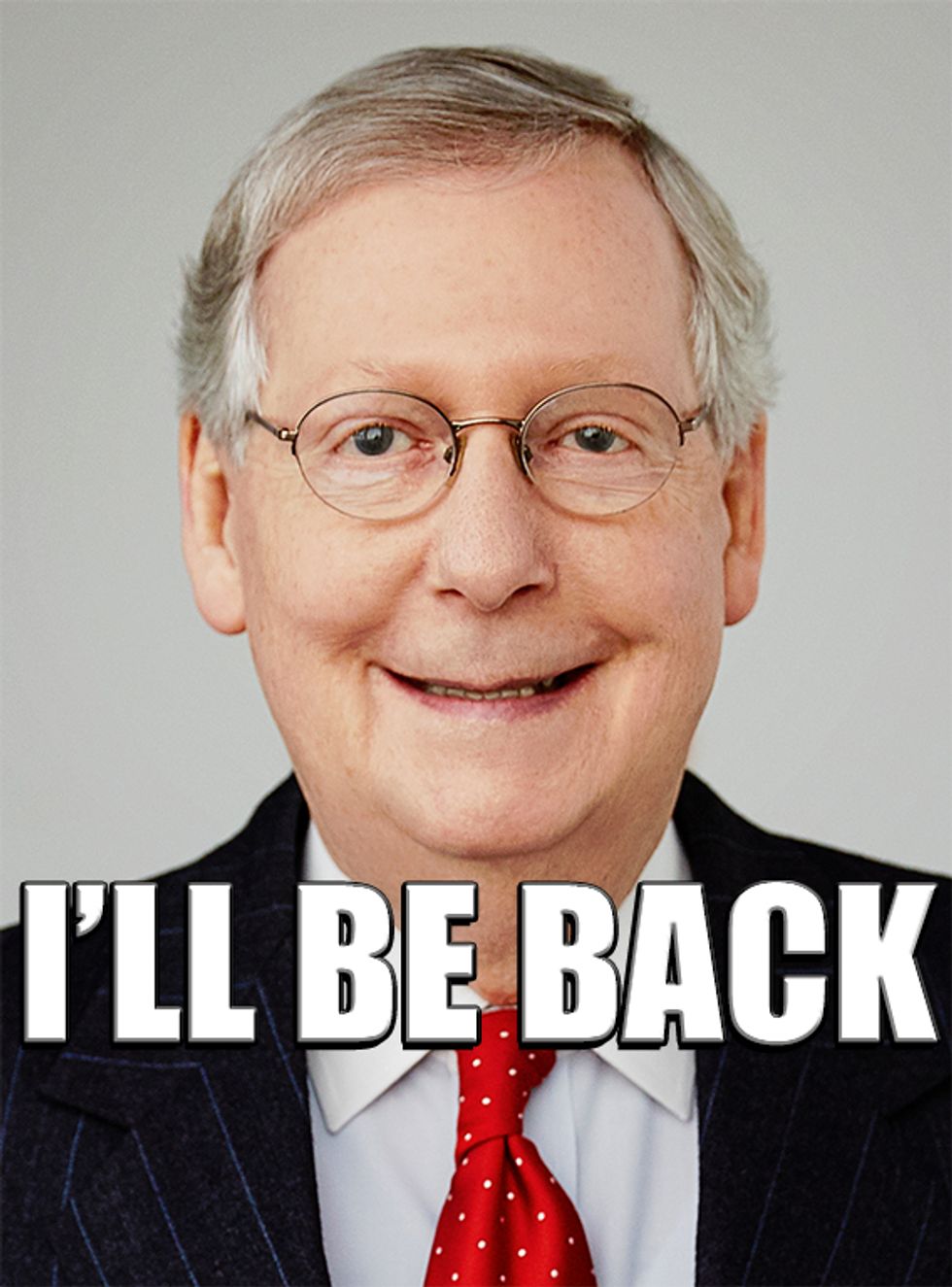 Morning Wonketariat! First up, Becca says to tell you thanks for sending all the Ameros and meeting this month's bounty a few days early. She says you are "good" or some shit. Now here's some of the things we may be talking about today.

Paul Manafort says he got $17 million over two years while working for Ukraine's pro-Putin regime run by Viktor Yanukovych in a new retroactive admission that he was, in fact, working for a foreign government. It's an honest mistake; when you try to launder your blood money, sometimes a few bucks go missing.

TrumpCare has been delayed to after the July 4th Recess after more and more Republicans began to run away, and now Mitch McConnell is just standing there holding his dick while pissing in the wind.

Mitch McConnell doesn't give one frosty fuck about Trump, his tweets, or the pee hookers. As long as Mitch gets his big, fat tax cuts and trashes Uncle Sam's rule book he could care less if any you filthy casuals die.

Jason Chaffetz doesn't want to sleep with Republicans anymore so he's asking people to give him an extra $2,500 a month so he doesn't have to sleep in some shitty basement apartment in Georgetown like the rest of the proles.

The EPA and the Army Corps of Engineers are pulling the Waters of the United States rules because they seem to think that the definition of "water body" is too broad, making it impossible to build McMansions and graze cattle on soil that's fertile just because of the dumb Clean Water Act.

Rick Perry put on his smart glasses to say some thoughts on energy, and they are good thoughts, except for the ones that are bad, but we need those thoughts, unless they are bad thoughts. Indeed.

The people Trump wants to reward with ambassadorships aren't going anywhere, and Not America is getting pissed at the incompetence, infighting and ignorance from Trump's White House.

A new Politico/Morning Consult poll says that Democrats aren't shitting all over Nancy Pelosi, just remember be civil when you all start arguing, otherwise I'll go get the hose!

A GOP SuperPAC is trying to tie every Democrat to Nancy Pelosi in 2018 because clearly she's the devil and using her evil uterus of doom to suffocate all of middle 'Merica.

New York Republican Rep. Chris Collins has lost $17 million in bio tech stocks, which is bad for multiple sclerosis patients, but great for people who think sketchy politicians who violate their responsibility as civil servants deserve to be taken down a peg or two.

Thirty employees suddenly quit a fancy Baltimore restaurant after an ICE agent delivered a letter demanding the papers of all employees for two years, even though all the employees are reportedly legal citizens. There's no joke here, this Gestapo bullshit is wrong.

A new nasty strain of ransomware is floating around the web that utilizes the same compromised NSA software as WannaCry, but this one looks like it may come from Ukraine (which means it's probably Russian), not North Korea.

CONGRATULATIONS, CHINA! You're back on the State Department's list of worst human trafficking offenders, and you've graduated to the illustrious "Tier 3," with states like Syria, Iran, Russia and North Korea. It's a dirty job, but you did it!

The Pentagon is saying it's noticed "active preparations" by the Syrian military to engage in another chemical weapons attack but, of course, Russians are denying it, saying that those chemical weapons could literally belong to anyone.

On the last day of the Montana special election campaign, after Greg Gianforte had already beaten up a reporter, the VP of Sinclair Broadcasting Group, the conservative media company gobbling up small town news outlets, personally gave a $1,000 to Greg Gianforte, and did it again after Ginforte won. Neat.

Deputy White House press secretary Sarah Huckabee Sanders hates how all of us fake LIBERAL news media East Coast elites can lie all the time, and thinks you, the American people, should listen to stories from James O'Keefe and Sean Hannity, "whether it's accurate or not," but then she got chastised by the press for being a hypocrite. :(

Sarah Palin is suing the New York Times for defamation after it printed an editorial linking her rhetoric to the shooting of Gabby Giffords in 2011. This, you may remember, stems from Palin posting a map with crosshairs on 20 congressional districts, tweeting, "bullseye," and giving speeches with the catch phrase, "Don't retreat, reload."

The Chicago Cubs are dragging their big, fancy beer mug to the White House (again) for a private meeting with Trump, and it's not much of a surprise considering how much money the Ricketts family, the undisputed rulers of all things Wrigley, dumped on Trump last year. WHERE ARE YOUR GODS NOW, CHICAGO?

SOMEONE hung a fake issue of Time magazine in several of Trump trash palaces, which is funny because the 14 issues that do have Trump on the cover don't seem to be anywhere.

Barack Obama is having so much fun on his perpetual vacay and Donald Trump is determined to drag him away from Kenyawaii beach back to Washington so he can be blamed for all the things!

HEY! We need your help...in the form of Ameros! Click the thingy and donate!