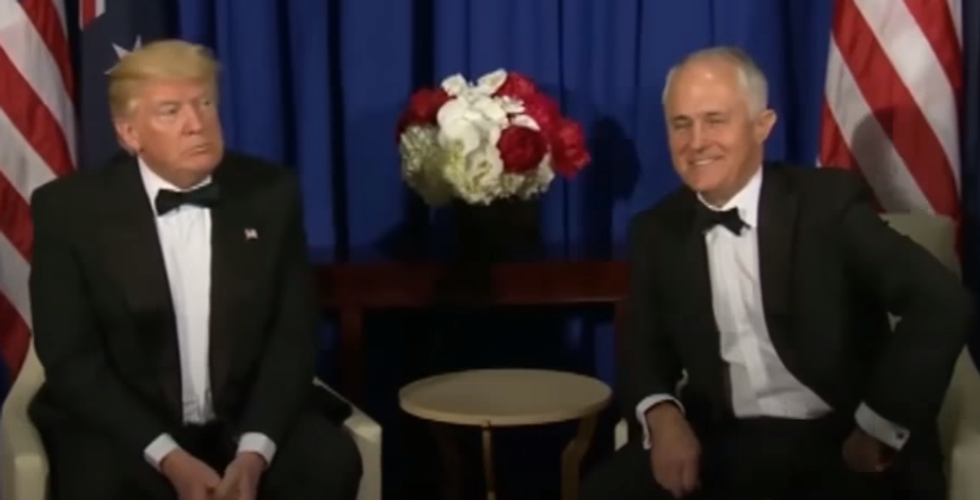 Remember that time Donald Trump had been president for barely five minutes and figured a really good way to assert his newfound authori-tah would be to make phone-yells at Malcolm Turnbull, prime minister of Australia, which is (geopolitical fact) one of America's strongest allies? Trump yelled at Turnbull about refugees and then really showed Turnbull his anus by bragging about how big his Electoral College win was. Turnbull was obviously very impressed, and the White House's excuse for one of the first of Trump's many presidential fuck-ups was that it was like FIVE PM (not kidding!), which meant he was far too sleepy and full of diaper-poo to do proper presidenting.

Obviously Turnbull continues to be very impressed with Trump, who is making good on his promise to restore international respect to America, hahahahahaha we can't even type that with a straight face. Literally every democratically elected leader in the world (and probably most of the authoritarian fucksticks) thinks Trump is a L-O-S-E-R, and Turnbull has been caught on tape expressing those thoughts! He was at a thing called the Mid Winter Ball, which sounds like some kind of version of America's White House Correspondents' Dinner, except for how it's not aired for public consumption.

Until now! Some video/audio has "leaked," and oh boy, Malcolm Turnbull was teasing Donald Trump in the Australian language!

It's funny because this is literally how Trump talks, minus the Australian sounds.

A lot of people don't know Abraham Lincoln was a Republican. Did you know that? Not many people know that. I just learned that!

UH-OH. The Australian news guy reporting in the video above said Trump MIGHT NOT think that Russia joke was very funny (because it's true), but Vladimir Putin might. Haw haw, wonder what old Vladimir is up to ... OH look here! Putin is just trolling America by saying maybe he will give James Comey political asylum in Russia like a common Edward Snowden. That fucker.

Reached for comment, the American embassy in Australia was like "pfffffft," because what are they going to do? Try to defend Donald Trump? We highly doubt career diplomats at American embassies are like "Oh please do not make fun of our president, as he is a very good and truthful and serious person. Just read his Twitter! Wait no, don't do that."

Anyway, this is just good stuff. We hate how much we enjoy laughing along with world leaders dunking on Trump, but we DO enjoy it, so fuck off. Just be patient, world -- we will make him Not President anymore as soon as we are Constitutionally able!

Wonkette is funded by readers like you, because we ain't got no ads! If you love us, click below to fund us!