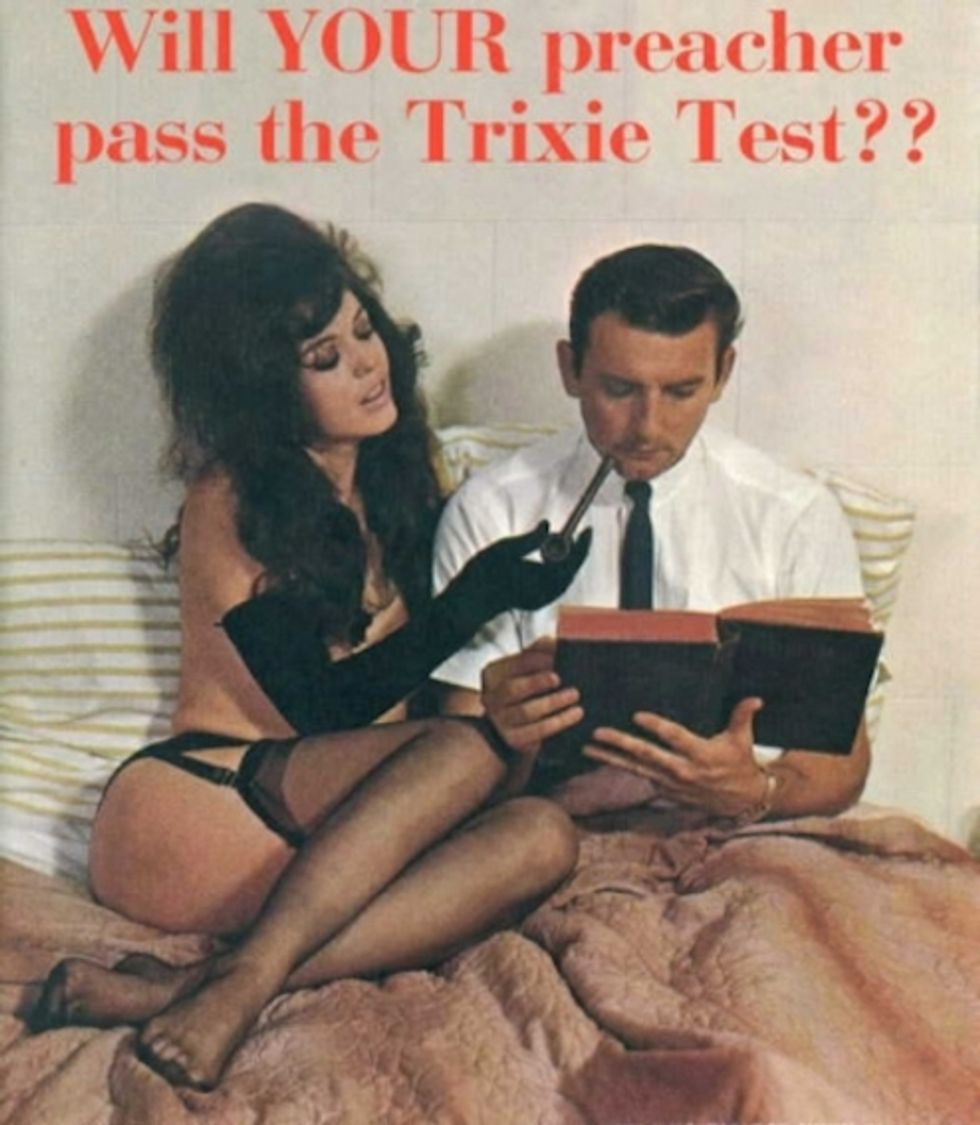 Some people are only able to help the world in one measly way, like writing dick jokes on the internet. Some people, however, are doubleheaded helpers, and want to give the world both spiritual guidance and also too medical help. Take, for instance, one Melody Kenyon of Colorado. Helping hands healer person Ms. Kenyon was arrested for prostitution when all she was doing was trying to help pull energy out of an undercover police officer's penis and now it is just this travesty, this sham, this shamnesty of a conviction that will prevent her from offering the sweet succor of marijuana to Coloradoanians everywhere.

Kenyon says she engages in the Hindu religious practice of Tantra and was engaging in spiritual communion for a fee with a man who turned out to be an undercover police officer.

She admits that her actions “could be misconstrued as something sexual,” but Kenyon said she was well within her rights as a Hindu.

Aren't misunderstandings, that staple of primetime comedy teevee everywhere, the worst? Let's just all take a moment and step back and get to the bottom of this and we'll find out that it was all a big misunderstanding indeed, like that time when Rachel thought Ross was doing something, but he was actually doing something else? We laughed until our sides hurt! Because of Friends, we're sure there was just some innocent confusion here.

Kenyon met the undercover Omaha cop April 4, 2012, at a Nebraska hotel, where she touched him with her hair and animal fur and told the agent she would pull out his “energy” of lingam, or penis, with her “energy” of yoni, or vagina. [...]

The officer took off his clothes and laid face down on the bed while Kenyon discussed the practice of Tantra with him, the suit says, and she was arrested by other officers on solicitation of prostitution charges after the undercover agent went into the bathroom.

See?! There's a perfectly good explanation for why she had to take money to wrap her vagina around his penis, and this is all just a tempest in a teapot, a cultural kerfluffle. Everyone knows there's a complete First Amendment religious freedom-y right to charge for sexxxytime as long as you make sure it is for a good spiritual cause. And the text of the Amendment specifically mentions the spiritual animal-hair rubdown. Jesus, everyone knows that.

All of this unjust injustice means that Kenyon is not able to run a medical marijuana dispensary in Colorado because of how she plead guilty to the prostitution charge and is therefore not of sound enough moral character to sell weed. Unfortunately, Ms. Kenyon may not be the best plaintiff to highlight the terrible injustices wrought against Hindu Tantric practitioners/pot salespeople, because her legal filing is less than coherent.

“The City of Fort Collins engages in [a] continuing series of criminal violations by licensing and undertaking actions in concert with five or more persons,” the suit claims. “The City occupies [the] position of ‘organizer,’ ‘supervisory position,’ and ‘other positions of management’ of the illegal drug distribution system in that it allows or denies certain individuals the ability to sell marijuana. The City obtains substantial income or resources from its actions in conjunction with the sale of marijuana.”

So selling drugs is illegal and Fort Collins is the biggest Avon Barksdale of them all, but Fort Collins' real crime is not cutting in Ms. Kenyon? Even setting aside the fact that Colorado has now legalized demon weed, such an argument is, as we say in the lawsplaining trade, unavailing, on account of how IT MAKES NO SENSE AT ALL. If it is illegal (WHICH IT ISN'T BECAUSE COLORADO = HIPPIES) then the City is Omar and there's no way to just sue to get in on the action because illegal. If it isn't illegal, there's still no God- or Constitution-given right that requires equal access to every everybody to get licensed to sell smoke. And finally, you plead guilty to the prostitution charge in the first place you nitwit high Tantric priestess lady.

If there's a god in heaven, this thing will go all the way to the Supreme Court because we definitely need to be able to write about this lady some more.