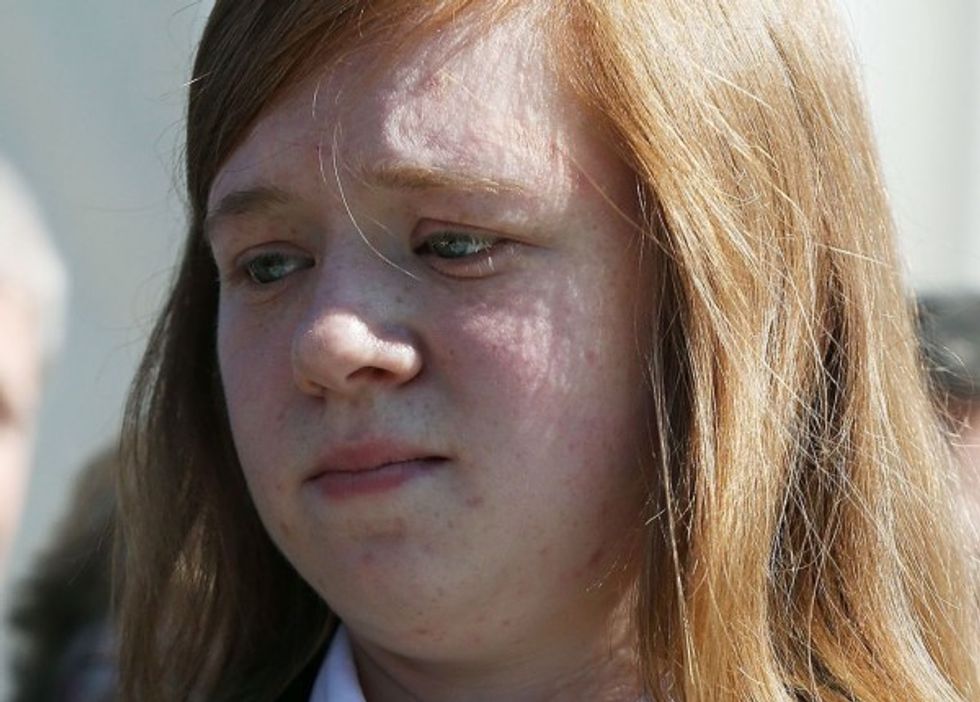 Today, the Supreme Court of the United States did a very good thing. They ruled against Ms. Abigail Fisher and her moronic lawsuit against the University of Texas, where she claimed she was not admitted because she was white. The vote was 4-3, as Justice Elena Kagan recused herself and Antonin Scalia is quite dead. The unsurprising dissenters were Roberts, Thomas and Alito.

To refresh your memory, the state of Texas guarantees admission to all students in the top 10 percent of their classes. Other students are then considered for admission based on a "Personal Achievement Index," which takes into account academic achievement, extra-curricular activities, community service and yes, race and ethnicity. Fisher claimed that had the school not considered race in the admission process, she would have gotten a spot there, which was not necessarily true.

As Elise Boddie explained in the New York Times back in December:

“Although one African-American and four Latino applicants with lower combined academic and personal achievement scores than Ms. Fisher’s were provisionally admitted, so were 42 white applicants whose scores were identical to or lower than hers. Similarly, 168 black and Latino students with academic and personal achievement profiles that were as good as, or better than, Ms. Fisher’s were also denied, according to the university.”

Given this, the fact that she thought she had a case at all was patently ridiculous. It doesn't make sense. There is absolutely no indication that she would have been admitted to the school had she been black or Latino anyway!

The majority opinion was written by Justice Anthony Kennedy, who explained that the school had valid reasons for wanting to promote a diverse environment:

A university is in large part defined by those intangible “qualities which are incapable of objective measurement but which make for greatness.” Sweatt v. Painter, 339 U. S. 629, 634 (1950). Considerable deference is owed to a university in defining those intangible characteristics, like student body diversity, that are central to its identity and educational mission. But still, it remains an enduring challenge to our Nation’s education system to reconcile the pursuit of diversity with the constitutional promise of equal treatment and dignity. [...]

These things are important! They really are!

The fact is, other things considered in these holistic admissions processes tend to privilege people from wealthier backgrounds. If you go to a poor school, you're unlikely to have a variety of extra-curricular activities to choose from. If you don't have any spare time because you have to work, or you have to take care of younger siblings while your parents work, you probably aren't going to be doing a lot of community service. That is why many different things must be taken into account in this process.

Alito, naturally, disagreed. His dissent was an astounding 50 pages long! He was real upset about this! He called it "affirmative action gone wild"! Which it really isn't, at all, for any reason. He also is pretty sure that the idea that a diverse student body produces educational benefits is a just a "fad."

I write separately to reaffirm that “a State’s use of race in higher education admissions decisions is categorically prohibited by the Equal Protection Clause.” Fisher v.University of Tex. at Austin, 570 U. S. ___, ___ (2013) (THOMAS, J., concurring) (slip op., at 1). “The Constitution abhors classifications based on race because every time the government places citizens on racial registers and makes race relevant to the provision of burdens or benefits, it demeans us all.” Id., at ___ (slip op., at 2) (internal quotation marks omitted). That constitutional imperative does not change in the face of a “faddish theor[y]” that racial discrimination may produce “educational benefits.” Id., at ___, ___ (slip op., at 5, 13). The Court was wrong to hold otherwise in Grutter v. Bollinger, 539 U. S. 306, 343 (2003). I would overrule Grutter and reverse the Fifth Circuit’s judgment.

Gee, I wonder if he'll be saying the same thing when the Republicans want to ban Middle Eastern people from entering the country? Probably not!

Here is the deal, ok? We can get rid of official measures of Affirmative Action for minorities just as soon as we get rid of all that unofficial Affirmative Action for white people. And not just the college-related ones like legacy admissions! Because when you have a situation where it is easier to get a job interview in the first place if you are a white person with a white sounding name, when most of the people in power are white and tend to hire people who look like them, when young white people still benefit from the fact that their parents benefitted from being white, then certain things have to be implemented to balance that out.

My own father, when he was Vice President of Sales and Marketing at Bausch and Lomb, also held a position as a Diversity Champion. People insisted that they were just hiring the most qualified people, and those people just happened to be white -- and they really, truly believed this to be true -- but he saw that what was actually going on was that it was mostly white people getting interviewed in the first place, and thus made a decision to make bonuses contingent on simply interviewing a larger percentage of minorities. And guess what happened? They suddenly discovered many qualified applicants from diverse backgrounds! Which, hey, worked out great both for them and the company, which greatly benefitted from having diverse perspectives on marketing different products -- but the fact that it had to be done in the first place means that we all still have a way to go.

By starting early, and counterbalancing white Affirmative Action in college with an Affirmative Action meant to give opportunities to minorities, schools like the University of Texas increase the pool of qualified job applicants from diverse backgrounds. And white students learn how to interact with people of different races, thus decreasing the likelihood that this will be difficult for them to manage in the professional world. It works out quite nicely for everyone!

Abigail Fisher, likely, will be the beneficiary of white Affirmative Action many times over in her lifetime. She will enjoy many unearned privileges based on the color of her skin, which she will never be expected to acknowledge or even bother being aware of. So yes, this is a bad day for her and I hope she cries a lot, but unfortunately, she'll probably be OK.