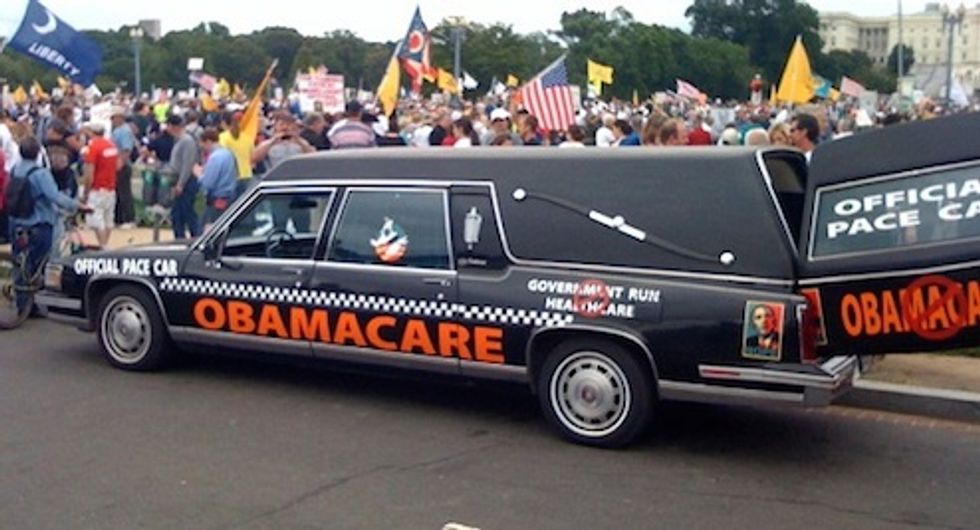 Even though the Supreme Court already heard a case about Obamacare and told opponents that sorry, it IS legal, stop whining, the Court has decided, not unlike the Republicans in Congress who can't stop trying to repeal, to give it another shot.

Stephanie Mencimer at Mother Jones decided that it would be an interesting journalism thing to find out who the plaintiffs in this case were, and the results were pretty funny. First off, she reports that the wingnut think tanks that concocted this case had a bit of a hard time even finding people whose lives were ruined by three or four words in the ACA:

I set out to track down the plaintiffs to hear in their own words why they had decided to take part in the case, and it soon became evident that CEI had struggled to find suitable candidates. Three of the four plaintiffs are nearly eligible for Medicare, meaning their objections to Obamacare will soon be moot. Two of them appear to qualify for hardship exemptions—that is, they are not forced to acquire insurance or pay fines because even with a subsidy insurance would eat up too much of their incomes—so it's unclear how Obamacare had burdened them. These two plaintiffs seemed driven by their political opposition to President Obama; one has called him the "anti-Christ" and said he won election by getting "his Muslim people to vote for him." Yet most curious of all, one of the plaintiffs did not recall exactly how she'd been recruited for the case and seemed unaware of the possible consequences if she wins. Told that millions could lose their health coverage if the Supreme Court rules in her favor, she said that she didn't want this to happen.

AND having been completely unsuccessful in finding four people whose lives were forever destroyed, they decided, "well fuck it, let's just find some wingnuts who hate the president a lot, nobody reads these cases anyway." And here are these wingnuts who, Mencimer reports, really haven't hardly talked to their lawyers in the case, but nonetheless will destroy your beloved socialist death panel "health insurance" plans:

Brenda Levy: Mencimer reports that Levy says she used to read Mother Jones, but now she doesn't we guess, so she spends her days hating the gays, donating to things like Prop 8 in California. Brenda doesn't even know how she got on this case -- she must have won on one of those scratch-off lot'ry tickets, she can't remember -- but she's pretty sure she doesn't like the idea of millions of people losing their healthcare because of her.

When I asked her if she realized that her lawsuit could potentially wipe out health coverage for millions, she looked befuddled. "I don't want things to be more difficult for people," she said. "I don't like the idea of throwing people off their health insurance."

Because of exemptions provided in the law, Brenda doesn't even HAVE to get death panel insurance, but she hates Obamacare anyway. She probably needs to call her lawyers and introduce herself because she is very excited about traveling to the Supreme Court, which is oh, two hours from her home. According to Mencimer, she said, "It's an adventure. Like going to Paris!", about this particular day trip. Brenda is a Pisces (maybe, who knows) and her favorite fish stick type is "frozen."

David King also is not required to get Obamacare, but this is the champ who managed to say "Benghazi" to the nice Mother Jones reporter who called him about being a plaintiff in the suit. To be fair, he probably said "BENGHAZI!!!!1111!!," but that is hard to transcribe. Unlike Brenda, David does not care if people lose their healthcare, because Benghazi (of course) and also they are probably just a buncha mooches anyway:

He said he doesn't care if millions of Americans lose their health coverage, because "they're probably not paying for it anyway."

Mencimer reports that both Brenda and David will be eligible for Medicare very soon, which is good for them, because as we know, the government has no hand in that. David smokes lots of cigarettes and probably would fight you for all the potato chips with bubbles.

Rose Luck won't be getting Medicare anytime soon, but she thinks that Obama is the worst, and she explains it to Facebook on a regular basis:

On her Facebook page, she has called him the "anti-Christ," voiced her belief that Obama came to power because "he got his Muslim people to vote for him," and noted her refusal to acknowledge his legitimacy as president. "Ohhhhh hell no i wouldn't admit he was our president," she wrote in one Facebook comment. She has warned her Facebook followers that Obamacare will cost people "77,000 dollars a year."

She seems nice, and I think she's onto something, with Obama getting all the illegal Mexican Muslims to vote for him as a way to trick us into thinking he is president. Savvy thinking, Rose! I bet he paid each one of them the $77,000 that each Real American is required to pay for Obamacare.

Rose is not required to buy insurance under the ACA either, so her life remains un-destroyed by it. But since she sounds so fun, maybe her lawyers will let her read her ALL CAPS Facebook posts aloud for the justices when she and Brenda get to go to Washington, which is just like Paris. Rose also prefers the frozen type of fish stick.

Doug Hurst and his wife, Pam, NO FUCKING RELATION to your Wonkette writer. Mencimer explains what is interesting about Doug and Pam:

Of the four plaintiffs, Doug Hurst is eligible for the most savings under Obamacare. According to legal filings, his projected income for 2014 was $39,000. Under Obamacare, he could have purchased a bronze health plan for $62.49 a month, a fraction of the $655 a month the bankruptcy filings show he paid in late 2010.

The Hursts no doubt understand the vagaries of the health care system—and the importance of insurance coverage. In 2009, not long before they filed for bankruptcy, Pam's 37-year-old daughter was hospitalized and died, following a long struggle with schizoaffective disorder. The ACA requires insurers to cease discriminating against mentally ill consumers and to cover mental health treatment as they would any physical ailment, without limits, higher co-pays, or deductibles. I wondered how the Hursts felt about the fact that other families with loved ones contending with mental illness could lose access to health care if the King lawsuit succeeds.

That is a sad story, and we think that it adds insult to injury that the right wing media has been so obsessed with hating Barack Obama that they lie to gullible people like this, people who have really been put through the wringer and who could genuinely be helped by the ACA. That was, like, the point of it (except for the parts of it about criminalizing Christianity and mandatory abortions and a million Benghazis), and many people truly are having their lives changed, having access to affordable, good insurance for the first time.

The reporter tried to talk to Doug, but it didn't work out because Pam Hurst was too busy screaming at her on the phone. Apparently the nice reporter just doesn't understand why their situation is so terrible and ALSO why Obama is the devil and Ted Cruz is the dreamiest:

So anyway, I was kidding (or was I?) when I said I wasn't related to them, STOP BEING MEAN TO OBAMACARE, Uncle Doug and Aunt Pam! Gah, you've always been the worst.

So there you have it, your four ALL CAPS World Net Daily commenter-type people who are going to destroy Obamacare forever, even though the law hasn't done one damn bad thing to them, god help us all. We are going to go bang our head on all the walls, trying to understand what went so very wrong in the American judicial system to bring us to this place.