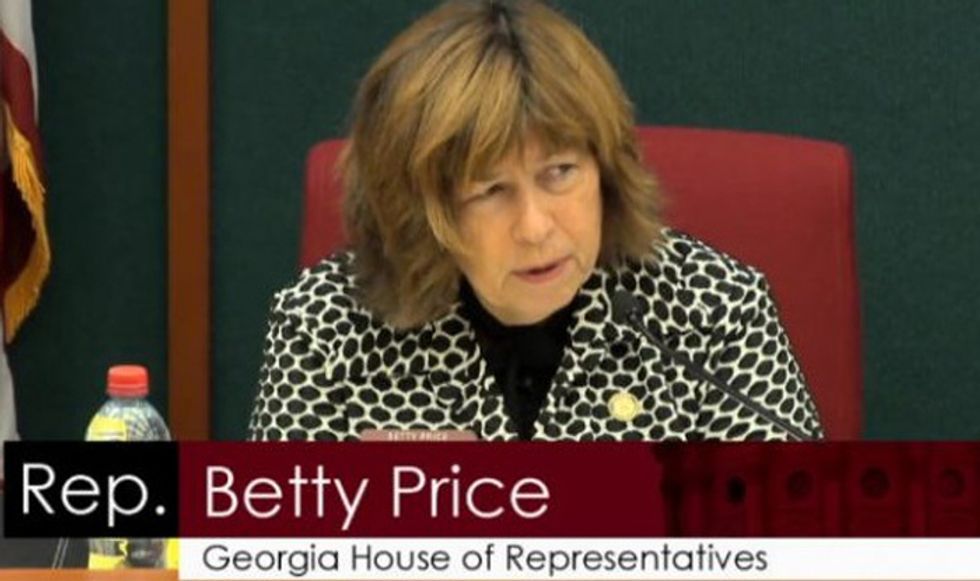 Also wants to know if Ryan White should be allowed around other children.

Even though Tom Price is no longer stinking up Congress or the Department of Health and Human Services with that awful jet-fuel smell, there's still a Price in a position to do terrible things to healthcare, at least on the state level. The disgraced HHS head's wife, Betty Price, is a Georgia state representative as well as a medical doctor, and shared some thoughts in a Tuesday meeting of the House Study Committee on Georgians' Barriers to Access to Adequate Health Care. Mostly, she would like to see more barriers for certain Georgians who need health care, because wouldn't quarantining people with HIV save a lot of money, really?

Pascale Wortley, director of the HIV Epidemiology Section for Georgia's Department of Health, was discussing HIV treatment options with the committee, and Price just wanted to run a few trial balloons up the wall and see if they'd stick to the flagpole:

“My thinking sometimes goes in strange directions, but before you proceed if you wouldn’t mind commenting on the surveillance of partners, tracking of contacts, that sort of thing. What are we legally able to do," Price said.

"And I don’t want to say the quarantine word, but I guess I just said it. Is there an ability, since I would guess that public dollars are expended heavily in prophylaxis and treatment of this condition. So we have a public interest in curtailing the spread. What would you advise or are there any methods legally that we could do that would curtail the spread,” Price added.

Just asking, you know. And at least the first clause of her statement made perfect sense. You can see the whole embarrassing spectacle in this video starting at about the 1-hour, 2-minute mark. Dr. Wortley didn't even answer whether people with HIV could somehow be barricaded off from the rest of society for our safety (and savings!), but instead acted like a normal human being had asked her a question about public health, explaining how the Health Department works to contact partners of recently-diagnosed people so they can be tested. She also noted that when people drop out of treatment, the department seeks to contact them and get back into treatment, since when the virus is suppressed by medication, it's highly unlikely to be spread.

Now, Dr. Mrs. Price is an anesthesiologist by training, not a public health expert, and as a state representative, she certainly wants to save money, especially if it could be accomplished by keeping icky people who have dangerous -- or at least these days, expensive -- diseases out of public. Since Wortley didn't even talk about putting anyone under house arrest or restricting their movements, Price went on to observe,

It seems to me it’s almost frightening the number of people who are living that are potentially carriers, well not carriers, with the potential to spread, whereas in the past they died more readily and then at that point they are not posing a risk. So we’ve got a huge population posing a risk if they are not in treatment.

Wortley at that point just smiled uncomfortably and went on to her next point without acknowledging Price's astute observation that in the good old days when AIDS was a death sentence and people died quickly, you didn't have to worry about people with the disease for too long. Of course, you still would want to quarantine them, because maybe it's still the mid-1980s and you're Lyndon LaRouche.

It's currently a felony in Georgia for persons with HIV to have sex with anyone without first disclosing they're infected. The committee Price is on was formed as part of a legislative effort to consider revising that and other state laws related to public health in light of more modern science. No one living with HIV actually testified at Tuesday's hearing.

We'll just predict the committee will update the law to allow people with HIV to engage in intercourse only while in a licensed biohazard containment facility, which must then be launched by rocket into the Sun.