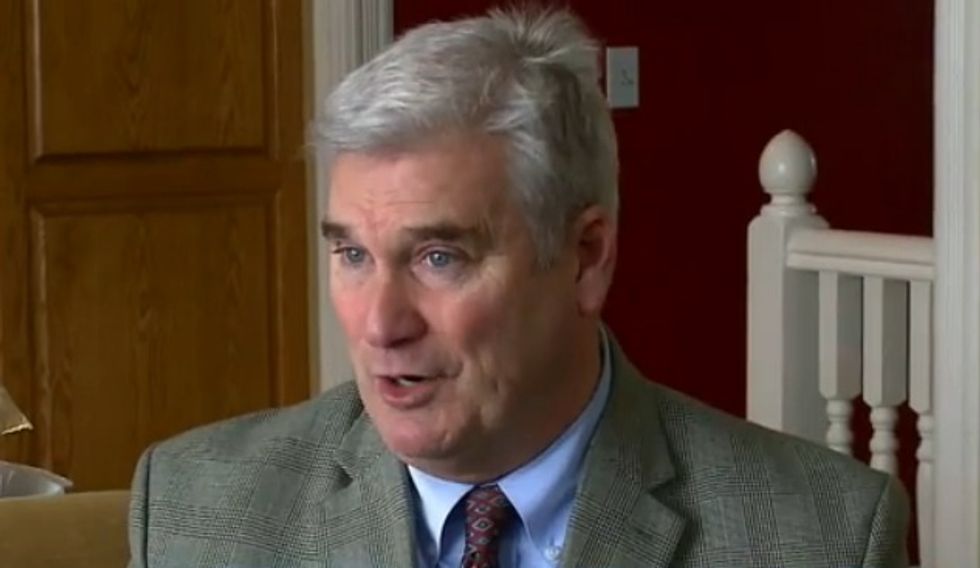 While Yr Wonkette joins the rest of the nation in mourning the loss of Rep. Michele Bachmann's unique brand of political wisdom, we look forward to the arrival of her Republican successor in the House of Representatives, former talk radio host and failed gubernatorial candidate Tom Emmer.

There's been a lot of chatter about whether anyone in the House can fill Bachmann's shoes to provide a counterpoint to what we predict will be Iowa farm girl and pig castrator Joni Ernst's eventful opening term in the Senate. Emmer might not have Bachmann's panache right out of the gate, but his low-profile approach belies the potential for him to fall in with the wild crowd during the first week of school.

Just this week, The Hill named [Emmer] one of the top 10 Republicans most likely to make trouble for House Speaker John Boehner, R-Ohio, as he tries to unite House Republicans.

It's true that Emmer shares many of Bachmann's conservative positions. He's staunchly pro-life, against granting "amnesty" to illegal immigrants and opposed to federal recognition of same-sex marriage. He railed against a bipartisan budget deal forged by fellow GOPer Rep. Paul Ryan because it didn't cut enough spending.

But for now, the former radio talk-show host says he won't be making any trouble. At least not yet.

Hmm, outrage over immigration reform and the budget deal? It sounds like Emmer might have some things to talk about with Louie Gohmert's insurrectionist faction ahead of the vote for speaker on Tuesday! We wouldn't be surprised to see no-trouble Tom standing with the Louie boosters, setting a course as a conservative agitator, which, by default, necessitates a certain loudness of mouth, helping keep up the level of media attention his constituents got used to with Bachmann as their lady on the hill.

Emmer also has the legislative experience required to carry on Bachmann's legacy, going by his three terms in the Minnesota House of Representatives. He spent his time there pushing to restrict abortion as tightly as possible, evangelizing for fewer gun restrictions, bravely calling for tax cuts in the face of mounting deficits, and proposing that all federal laws be considered void in Minnesota unless approved by a super-majority of both of the state's legislative chambers. Tragically, few of these initiatives came to fruition, since his party remained outnumbered for most of his tenure. Now that he's on his way to Washington, we'll see what Tom can do when his party's in the majority!

Emmer gave up his Minnesota House seat in 2010 to concentrate on losing the race for governor to former U.S. Sen. Mark Dayton, bringing unwelcome attention to some of his corporate campaign donors with his fight against the gay menace and starting a war with the service industry by proclaiming that restaurants shouldn't have to pay tipped employees regular minimum wage, since waitstaff were the real fatcats, victimizing business owners who lived every day on the edge of starvation. During a town hall meeting with hospitality workers intended to smooth things over after a video of him "waiting tables" in solidarity bombed, local activist Nick Espinosa dumped a totebag full of pennies on Emmer's table as a "tip."

Suddenly without an elected office or any sort of other employment whatsoever, Emmer took up space on a talk radio show that subsequently made national headlines when his co-host, with Tom's encouragement, delivered this novel response to the parents of Newtown shooting victims calling for tighter gun restrictions:

I don't care if it's in Minneapolis or anywhere else. Just because a bad thing happened to you doesn’t mean that you get to put a king in charge of my life. I’m sorry that you suffered a tragedy, but you know what? Deal with it, and don’t force me to lose my liberty, which is a greater tragedy than your loss. I'm sick and tired of seeing these victims trotted out, given rides on Air Force One and hauled into the Senate... I would stand in front of them and tell them, "go to hell."

Yes, a talk radio hack's loss of firearm-fondlin' freedoms is a greater tragedy than the bloody extermination of children in their classrooms. Tom's been a little quiet on guns since then, so we are eager to hear what the rookie congressman has to say the first time he gets a crack at a floor speech on the Second Amendment.

Tom says he'll be focusing on "customer service," helping identify what his constituents want and helping them achieve it. (It's adorable that either he thinks that's how Congress actually works or that he assumes that we do.) We expect Tom's service window will even be open for business extended hours; he announced that because he's such a "Minnesota boy," he won't be needing an apartment in Washington, since that's just where he commutes for work, and he will be instead setting up camp in his office.

We'd be worried for the long-term well-being of his office staff in this arrangement, having to dodge the socks drying on the radiator and Febreze the couch he's nesting on every night, but they're largely holdovers from Bachmann's operation, so they've no doubt been through worse.