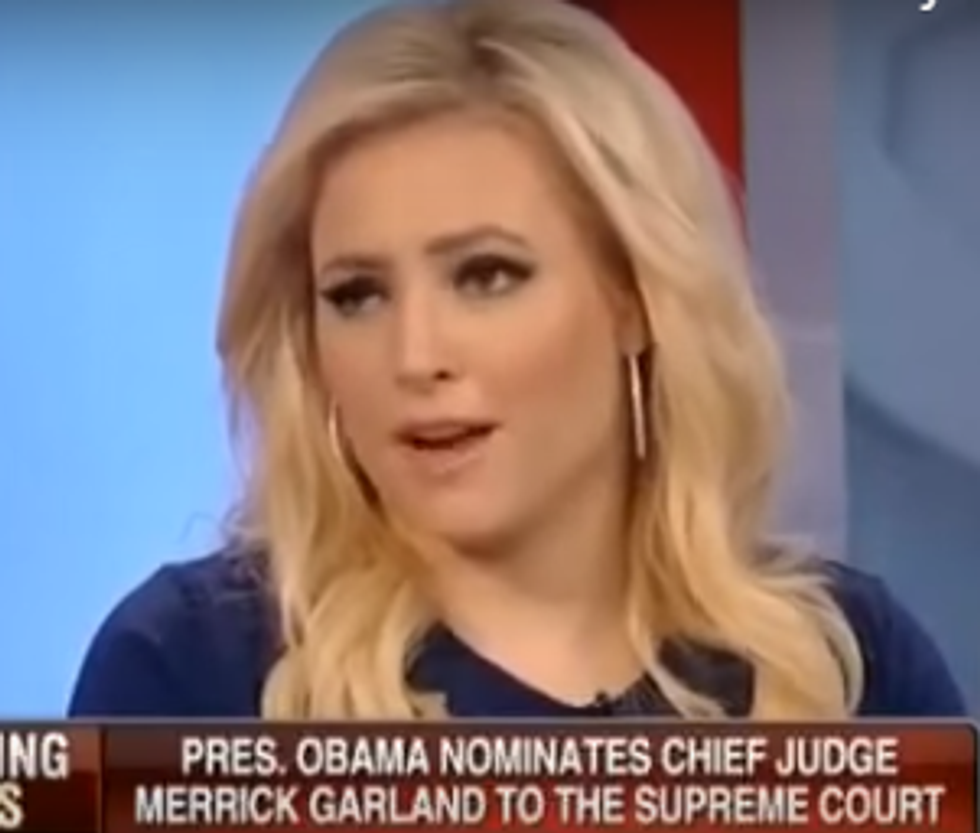 [contextly_sidebar id="dOphfDLp7lBCrEHVs7iGLjMMZryvVuEv"]Every so often it's important for us to check in with the GOP's greatest mind. No, not Ann Coulter, she's a crusty pile of washed-up nothingess. We are of course talking about Meghan McCain, who for some reason is frequently allowed to make words on the Fox News Network these days. Does she have a thinky thought to share about President Obama's choice of Merle Crabshack or however you spell it, to sit on Dead Scalia's Shart-Stained Throne Of Justice? Of course she does.

Say a thing, Meggles The Clown:

The average person at home probably doesn't realize there are all these intricacies happening. I think this is exactly why people hate President Obama because he will possibly sacrifice this man's career simply for his own political benefit.

OK a lot of people dislike President Obama strongly how about that heeeeheeeheeegiggle.

She's like a fucking shaman her analysis is so sage.

[contextly_sidebar id="oAtBupANt3iK55UNfAempCMx0EjmYmby"]Now to be fair, the "strictly dickly" Meghan (because she likes dicks so much she could play with them for FIVE AND A HALF YEARS, ALAN), seen most recently in these pages bursting a funbag because poor Ted Cruz's poor babies were being exploited by somebody who wasn't Ted Cruz, did not come up with her brain droppings all by herself. (Wait, was that a viciously backhanded "to be fair"? HAHAHA YUP.)

[contextly_sidebar id="JhOCgZV6Fl1dDFbZLk8H2z8nEtOZJknQ"]She was simply responding to OTHER bad mouth turds, delivered on a silver platter by minor league conserva-lesbian pundit Tammy Bruce, who's really down with the idea of Republicans caterwauling for the next 10 months over how it's NO FAIR! for Obama (the president) to appoint a Supreme Court justice, even though, as preznit explained in his speech Wednesday morning, most Americans think Republicans should do their fucking jobs and give his nominee a vote.

[Republicans have] handled it very well from the beginning. They said no before anyone was named. And I have to tell you, President Obama knows this, he doesn't want Judge Garland to be on the Supreme Court!

HE DOESN'T? Oh fuck, our conspiracy theory might be right, about this being a fake red herring nomination to make way for his REAL nominee, which is William Ayers french kissing Jeremiah Wright while Beyoncé starts a race riot in Antonin Scalia's rotting throat.

This is the most political thing he could have done, trying to elevate himself, perhaps at the expense of Judge Garland, having it be a political fight in this way. Heartbreaking to listen to the judge talk about his family and his life, when in fact he's not necessarily going to be the nominee. But I think that the Republicans would have more trouble if they acquiesced here, there's no reason to, and I think they're handling it properly.

Translation: Republicans are gonna bend over and take it for Obama, like they always do eventually, and Meghan McCain and Tammy Bruce are fucking morons, THE END.