Megyn Kelly Asks Duggar Girls: Show Us On The Doll Where The Liberal Media Touched You 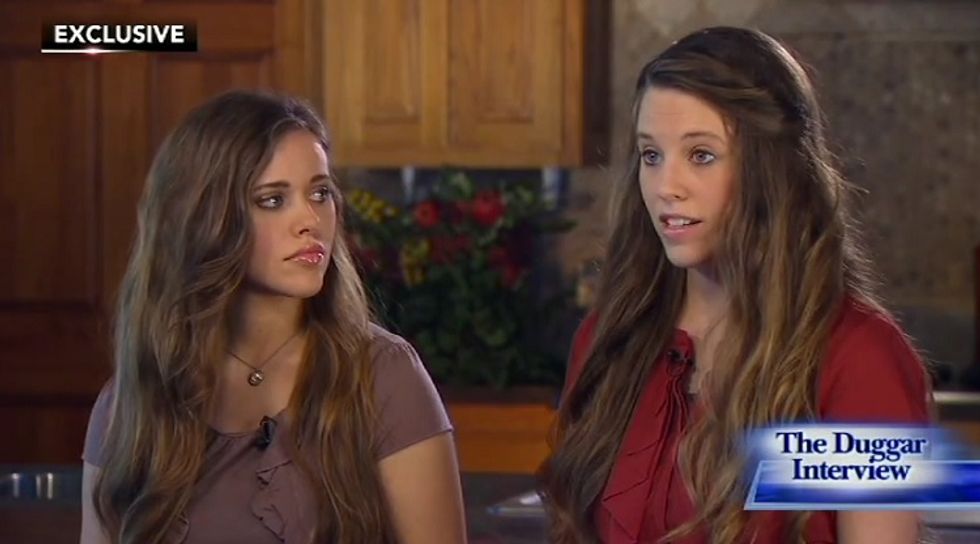 OK, we think we've got it figured out, now: Megyn Kelly's Fox News interview with Jim Bob and Michelle Duggar Wednesday was like the end of the "19 Kids and Counting" franchise, and her follow-up interview with sisters Jill and Jessa Duggar Friday night paved the way for the rumored spinoff series focusing on Duggars: The Next Generation, which is set in the same fantasy universe as the original series but has better special effects. The Daily Banter's Bob Cesca accurately predicted the overall shape of the interview with this tweet, 20 minutes into the interview:

That's about right; and herewith we bring you the most fucked-up moments from the interview. You may want to have a bucket or airsickness bag handy while we recap? Go get the emesis basin of your choice; we'll wait.

Josh Duggar is the kindest, warmest, most wonderful human being...

1: Boys will be boys, they will be curious, and it was No Big: "Josh was a boy, a young boy in puberty, and a little too curious about girls," according to Jessa. Also, too, the sisters want to clarify that what happened to them was nowhere nearly as bad as people have made it out to be, and Josh is no "child molester or a pedophile or a rapist," although if you want get all technical about it, yes, touching girls on their swimsuit areas and breasts is pretty much molestation, it just is. Jessa just wants the world to know that Josh's "curiosity" (ew! ew! ew!) "got him into some trouble. And he made some bad choices, but, really, the extent of it was mild -- inappropriate touching on fully clothed victims, most of it while [the] girls were sleeping."

Already we're into The Denial Zone, considering that the police report cited Jim Bob recounting that Josh had told him of both over-the clothes and under-the-clothes touching "on the breast and vaginal areas" while the girls slept.

2: Mom and Dad handled it just great! While the Duggar parents didn't seek any kind of help for Josh until after the third time he confessed to touching the girls (16 months after they first found out!), Jessa and Jill agree that their parents "handled the situation very well," as Jessa put it, sending Josh away for "therapy" that consisted of helping with some construction work, and "mentoring" of some sort. Maybe since Jesus was a carpenter, that did the job. And when he got back, Mommar and Daddar Duggar set up "safeguards" to make sure nothing went wrong again: no more hide-n-seek games, no more boys babysitting the girls, and locking the doors at night. Jill said that she'll do the same things with her kids, and that, "as a mother, now, I look back, and I think, you know, my parents did such an amazing job for me. Even when we went through the DHS investigation they complimented my parents on what an amazing job they did through that process."

Who knows, maybe a caseworker really did say that: "You have done an amazing job of cleaning up the mess your child-molesting son made." We bet they say that kind of thing all the time.

3: Being a child molester doesn't mean you can't condemn homos: Jessa stuck up for Josh's job at the Family Research Council, where he explained to America how The Gays are hell-bent on destroying American families. He's not a hypocrite, because he's sorry and it was a long time ago, maybe even before steam trains and the internet and even the existence of homosexxicans:

It's right to say, "Here's what I believe, here's my values," even if you've made stupid mistakes or failures. If you've had failures in your past, it doesn't mean you can't be changed. … I think the real issue is people are making this sound like it happened yesterday.

So no, being a straight kid-diddler doesn't preclude you from fag-bashing. Long time ago, you know.

The Media: Those Rat Bastards, They Ruined Everything

4: The Media made Jill Duggar cry: When they found out that In Touch magazine would print the redacted police report from 2006, "We were pretty furious," said Jessa, and Jill broke into tears: "we're victims, they can't do this to us." Jessa -- and this looked like a well-rehearsed talking point -- added, "The system that was supposed to protect kids … has greatly failed ... You go to the store and there's your picture on a magazine."

5: Jessa is a Lawyer: Playing legal scholar, Jessa asserted, "You can’t FOIA juvenile cases, everybody knows that, and so I think there's some hokey pokey going on there" (The Washington Post begs to differ, and so does Salon).

7: Media attention on your brother's crimes is far worse than the crimes themselves: Jill teared up again as she explained, "I see it as a re-victimization that’s a thousand times worse. This is something that’s already dealt with. We’ve already moved on. It’s not the truth. Everything is distorted." Better to just let it all stay hidden, really. Did they mention it was a long time ago?

We've seen so many in this country stand up on behalf of child victims; we've seen very little of that with respect to your case and the violation of your privacy rights, and the violation of promises that your records would be sealed. Do you think it has something to do with who you are, who the Duggars are, what your family stands for?

9: The revelation of Josh Duggar's actions will hurt other victims: This is a weird one: Jill explains that the news about the Duggar family will actually scare abuse victims away from coming forward, because of all the negative publicity her family has gotten. We feel fairly comfortable predicting that since most abuse victims don't have top-rated reality shows, this one may be a stretch. Nevertheless, Megyn Kelly closed the show with an appeal for victims of abuse to call a hotline, even if they don't have a TV show.

10: It's not about the TV show (it's about the TV show): "We're not a TV family," says Jessa, looking like a flawless TV person. "We're a family that just happened to be on TV." Jill agrees, and says that they'll just "have to see what life brings." And also the focus group, of course.

And then the interview was over, Megyn and Howard Kurtz yelled at the media some more for invading these wonderful young women's privacy and going after Christians, and we were free to not think about Duggars for at least a little while, THE END.