Megyn Kelly Shouting Match On Racism With D.L. Hughley Does Not Go Well, For Megyn Kelly 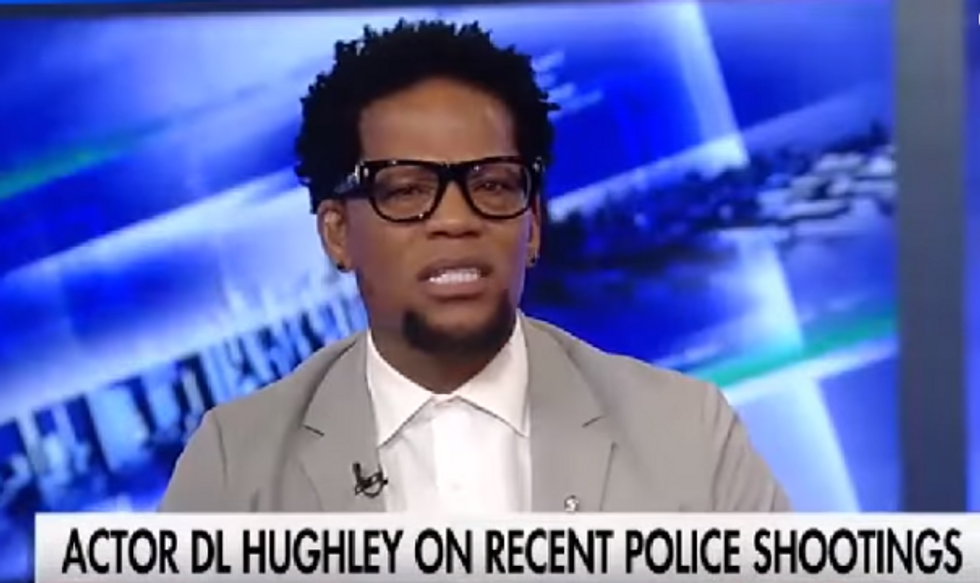 When you want to hear hard-hitting analysis on police shootings of black people, and more broadly, the systemic racism present in interactions between police and black folks in America, you go to Fox News, obviously. Megyn Kelly, who we like sometimes but not right now, hosted actor and political commentator D.L. Hughley for a discussion about racism (and his new book!). It did not go well, for Megyn.

Oh, it started out sweetly enough:

MEGYN: D.L., thank you for being here.

Shots fired! You see, Mark Fuhrman -- the perjuring, racist cop what got so famous during the O.J. Simpson trial, was on Megyn's teevee program just before Hughley! He did not like that. And really, fuck Fox News for always needing the racist perjurer bigot's perspective, in order to be "fair."

[wonkbar]<a href="http://wonkette.com/603800/another-black-man-philando-castile-shot-dead-by-police-because-thats-what-happens-in-america"></a>[/wonkbar]But they moved on from that, to the larger question of "Was Philando Castile's girlfriend making up lies?" and "How can we even know what happened if we didn't see him killed in the video?" Hughley made the very salient point that, in these instances, the presumption of innocence is always given to the cops, but never to the black folks who get killed by them.

Megyn wasn't really feeling that line of thought, so she decided to change the subject and talk about Ferguson, presumably because conservatives already have a picture in their heads of the monster black teenager Michael Brown grabbing for the cop's gun. That's easier for Fox News watchers to grasp, yeah?

Thus began a shouting match for the ages, because were they actually there to re-litigate Michael Brown's killing by the gun of Officer Darren Wilson? No, D.L. Hughley wanted to talk about Philando Castile's murder, please.

But Megyn was just saying that we didn't know all the facts with Ferguson, just like right now we don't know if Philando Castile was in fact a monster black teenager wearing a hoodie and eating Skittles who shot the policeman first. Couldn't that be what really happened?

This led to the most important exchange of all:

D.L.: What I'll tell you is this ... it is not uncommon for you all to see one thing ... the only place racism doesn't exist is Fox News and the police department. That's absolutely true.

MEGYN: Come on, come on, that's insulting. You just insulted millions of people watching this channel.

D.L.:And you know what? I'm insulted by the things I hear on this network. I could care less about insulting people that insult me on a daily basis.

Oh no, the poor white supremacists who watch Fox News all the time, who are so dumb and racist that they consider Fox to be the only "fair and balanced" news source that exists, might get their white fee fees hurt by the mean black comedy man saying they are racists! Wherever are Megyn Kelly's smelling salts? For she hath fainted into a pile of her own hypocrisy!

Megyn granted that many black people tell the same story about how they're treated differently from white people, saying that "most reasonable people will give you that." See, Megyn is REASONABLE. But she wants to know why D.L. Hughley's gotta be all "racism this" and "racism that"? WHY?!

[Y]ou know what shuts down all reasonable dialogue is throwing out the term racism before it’s been proven.

Oh my stars! And why is this all unfair, Megyn?

It’s very dangerous when you get to the point where you paint an entire group with the same brush based on the bad actions of a few.

And D.L. Hughley's face went blank, as did the faces of every black person in US America, dead or alive, because OH MY GOD MEGYN DID YOU HEAR WHAT YOU JUST SAID AND HOW IF YOU TURN THAT STATEMENT AROUND OH MY GOD WHAT DO YOU THINK THIS DISCUSSION IS ABOUT IN THE FIRST FUCKING PLACE?????

At the end, everyone agreed racism was solved forever.