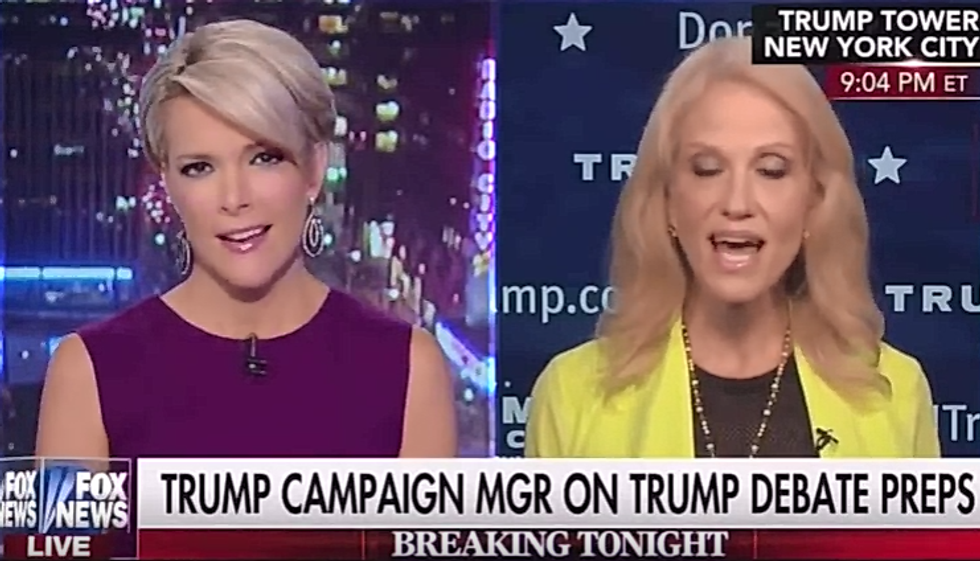 Conway went on Megyn Kelly's Fox News program Wednesday night, and she complained that it's just NO FAIR how Hillary Clinton is being so mean and nasty to Donald Trump, when all he's ever been to her is a sweetheart. Hillary is releasing these mean ads that quote Trump's hateful comments about women verbatim, which is very rude because Trump succinctly stated that he wanted to say something mean about Bill Clinton's infidelities during the debate, but he didn't, because he is NICE. Megyn Kelly, ahem, was not having it.

CONWAY: I think he's gotten very little credit ... for how gracious he was at the beginning and at the end of the debate. At the very beginning ... he actually said, "Secretary Clinton," and then he looked over and said, "Should I call you Secretary Clinton? I want you to be happy, it's very important to me."

TIME OUT. Trump said that because he's one of those pussies who can't stand it when people call him by his first name, and he was unsuccessfully trying to get Hillary to call him "Mr. Trump." She proceeded to call him "Donald" throughout the debate, because he's unworthy of respect. BACK TO THE TRANSCRIPT:

CONWAY: At the end of the debate, after she tried to rough him up over a couple comments he's made over 25 years or so, with respect to women, he said, you know, I came prepared to say some rough stuff, but I won't do it because your family's here and your daughter's here. But it's not nice that you're running hundreds of millions of dollars in negative ads against me ...

KELLY: Kellyanne. Come on. It's "not nice"? They are running for president. Of course she's going to hit him with negative ads.

CONWAY: But the ads should be true ...

KELLY: The ads that she's running about him when it comes to his comments on women use his words, Kellyanne.

That's right! Oh look, here's one of those ads!

Wonkette is very sorry, Kellyanne Conway, for posting a negative Hillary Clinton ad featuring Donald Trump saying words with his nasty, hateful mouth. That is probably not fair and balanced of us!

Conway says she doesn't know why Hillary's running mean ads, when she won't even tell us what she's going to do about Obamacare, WELL I NEVER! This leads to more campaign-splaining from Megyn Kelly, for the benefit of the lady who has apparently never done this before:

KELLY: There's two facets of a campaign! You know that better than anybody! You hit your opponent and try to disqualify him or her, and then you sell your own vision.

BUT THAT'S UNKIND! Can't we all just get along?

A bit later in the interview, Megyn Kelly talks some more about what a shit Trump is to women, because she is so not fucking done talking about that:

KELLY: You raise the question about, you know, he made a couple comments over 25 years. You know that's not true. You know he has repeatedly made comments about women, about their looks, about their size, their weight. Even in this campaign, talking about Carly Fiorina's face. Retweeting a negative picture about Heidi Cruz's face. Criticizing Hillary Clinton and her "look." Kellyanne, this is an issue for him, is it not? [OH AND THAT ONE TIME HE SAID MEGYN KELLY WAS BLEEDING FROM HER WHEREVER. -ed.]

CONWAY: Well, Megyn, but is that the campaign issue that Hillary Clinton is running on? The answer seems to be yes. Do we not deserve as voters for this woman to tell us whether she thinks Obamacare is a disaster ... [WORDS WORDS WORDS] ...

Kellyanne Conway, did you not hear what the mean news lady just said about how there are TWO FACETS to a campaign? Kelly tries to explain that Hillary is attacking Trump on this because she knows women hate him, and Conway just doesn't get it. Why does Hillary have to be so goshdarn impolite to Mr. Trump?

As we said above, it is very possible Kellyanne Conway is simply D-U-M, and we hereby retract all the sympathy we have ever expressed for her.