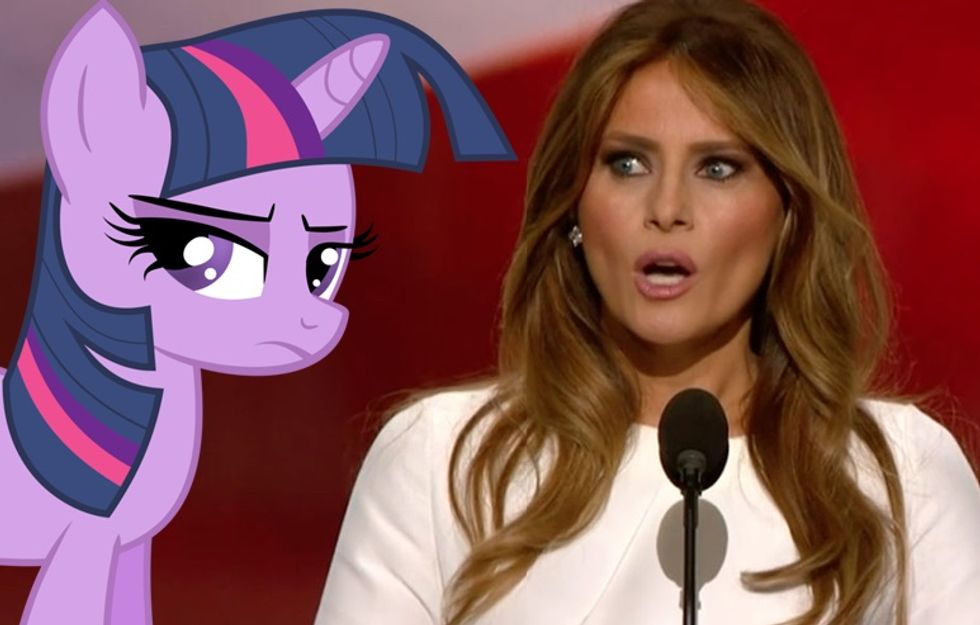 MelaniaGhazi/PlagiarismGate continues to unfold in a veritable festival of derp and denial, with Trumplings spinning like pulsars to "prove" that passages from Melania Trump's convention speech Monday night weren't plagiarized at all from Michelle Obama's 2008 convention speech. RNC Strategist Sean Spicer has been making the rounds of cable news shows explaining that if you search short phrases from the speech, you'll find lots of similar thoughts out there. So yes, it's the Cliché Defense. On MSNBC, Spicer downplayed the plagiarism, which isn't even plagiarism: It's pure coincidence:

MSNBC's Craig Melvin was incredulous, asking "You're not going to do this?" but Spicer most certainly was:

Turns out, he's been trotting out (HAR!) this list all over cable; the full Twilight Sparkle line is "This is your dream. Anything you can do in your dreams you can do now," as we see in this clip from CNN, where Wolf Blitzer politely sits and listens, as a journalist should:

Huh. We suppose we ought to point out that apart from having "your dream" in it, the pony line isn't even close. Still, words are just words, and some words Melania said are found in other lines in other things. But you know what none of those people or ponies said? Those lines and others in in exactly the same order! Roll 212!

On Pat Robertson's "700 Club," Christian Broadcasting Network reporter David Brody explained that it simply didn't matter, because it was such a terrific speech, and who cares if some of it was plagiarized? It's not like the Bible says anything about stealing, at least not when it comes to words and exact phrases:

Brody applauded her “great” speech and dismissed the “quote ‘plagiarism’ charges,” saying that “the long term story here, Pat, is that the reality is that Melania Trump gave a very good speech last night. She was poised, smart, articulate on that stage on Monday night and what that means, Pat, going forward is that Melania Trump needs to get out on the stump.”

“Clearly, she is articulate, doing a very good job -- and they need help among women voters and she can be a key part of that,” he added.

Robertson noted that Melania Trump was “absolutely gorgeous” and “Mr. Trump has a good eye for beauty.”

Note how we used the link and the blockquote to indicate that we are using words from RightWingWatch, and how they use quotation marks to indicate what parts are their framing and summary, and what parts are quoting Mr. Brody. Amazing how that works! Then again, the Book of Ecclesiastes does say, "There is nothing new under the sun," so perhaps a bit of generous borrowing of the exact text of a speech is fine.

Also, Ben Carson (who copied all of God's answers on a biology test) explained how any copying Melania or her speechwriters might have done was actually a really cool thing, since it means Republicans and Democrats can come together over shared values (and let's ignore that one of them said it first):

"If Melania’s speech is similar to Michelle Obama’s speech, that should make us all very happy because we should be saying, whether we’re Democrats or Republicans, we share the same values,” he told reporters after addressing a Florida GOP delegation breakfast at a hotel here 20 minutes outside of Cleveland, where the RNC is taking place.

“If we happen to share values, we should celebrate that, not try to make it into a controversy,” he added [...]

“I don’t think they were plagiarized. I think there are general principles that are very valuable to Americans, and of course to express those principles you’re going to use similar language,” Carson said.

Yes. general principles that come out sounding exactly the same, by pure coincidence, eight years apart. Let's roll 212 (Stewart 2009) once more, shall we?

And then of course, for the sake of Irony, several people have rediscovered this 2012 Melania Trump tweet about the importance of being your own person, expressing your own ideas, and stuff:

Hahaha, yes, be yourself! Or be Michelle Obama if you want to! Still, it's a nice thought, and it sure would be a hell of a coincidence if someone else had said something like that, huh? Like, if you scroll down in the comments, you see several people who seem to think super-teacher Marva Collins said it:

Huh. Melania left that last line off for some reason. Maybe because "Imitation is suicide" is such a downer thought. Or maybe because it's only applicable to some politicians. For Joe Biden, imitating Neil Kinnock was political suicide, or at least a long-term injury. But for Melania Trump? It's only an amazing coincidence. Our favorite reply to Melania's 2012 borrowed quote ("plagiarism" is such a mean word, isn't it? Even when it's 100% accurate?) is this one, from Melissa Dunphy, with a set-up from Denise Olive-Velez:

Ms. Dunphy's Twitter profile says her UPenn DhD dissertation is "an opera about the sex life of #Ayn Rand. Narrated by Alan Greenspan." We're betting she knows what is, and isn't plagiarism. Or parody for that matter.

Maybe the Trump team could learn something from Twilight Sparkle after all. Melania just needs to sit down and write a letter:

Today I learned that when you're caught doing something wrong, the smartest thing is to just own up to it and take your lumps, instead of spinning out a lot of ridiculous stories that only make you look foolish. Apologize and own your mistakes! Your real friends will forgive you, but trying to lie about it will just make everyone trust you less, and you'll end up even more embarrassed than if you had just admitted you were wrong.