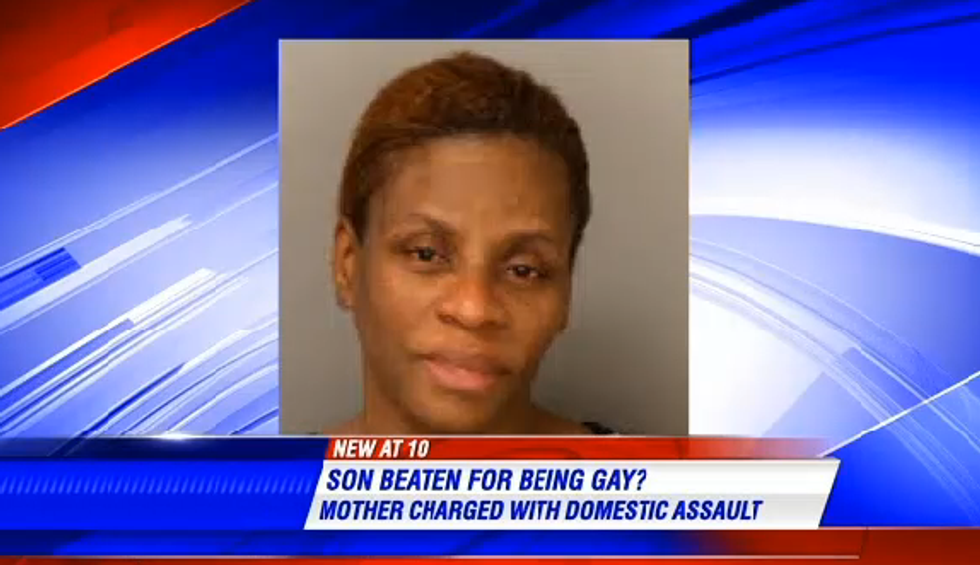 It is time for a dispatch from your Wonkette's Memphis Outpost, because we have a new hometown Best Mom Ever to tell you about. It seems that Jacqueline Alexander was quite unhappy with how "feminine" and "gay" her son is, so she decided to assault him:

Neighbors of Jacqueline Alexander are shocked any mother would beat her son for acting “too feminine and too gay.”

According to police, Alexander punched her son in the face around 11 p.m. Tuesday at their home on Mt. Moriah Road.

Police say Alexander's son was lying in bed when she accused him of “being too feminine and gay."

And now she has to appear in court to face these charges, and GOOD, she should go to jail. As a longtime Memphian, we are both Not Surprised that this happened, and also not at all surprised that the neighbors are like "WTF dude, he is your KID, that is not how parenting works?" Despite what you may have heard the South is full of really nice open-minded people. It's just that all of the terribles get much more press, because they're loud and stupid.

It's unclear how old the kid is, but unfortunately, this kind of stuff is way too prevalent, even in 2015. We are going to be serious for a paragraph or two, so in case you need a joke to carry you through, we will type TRUCKNUTZ! and move on, and then there will be a reward at the end. Ready?

All right. Also interviewed for the report above is Will Batts, director of the Memphis Gay and Lesbian Community Center, who, full disclosure, is one of your Wonkette's pals. According to Will:

“It's shocking every time it happens, but it's not new to us at the center," said Will Batts, who runs the Memphis Gay and Lesbian Center. "We hear a lot of stories about people who are assaulted by family members. Young people who are kicked out of their houses when they come out to a parent.”

We are in this very weird place right now for LGBT acceptance (pronounced "lugbutt") and equality. Yes, there are now thirty-seven states where marriage is legal, and over half the country generally accepts the gays, at least in the abstract. But as the pro-gay side is winning all the prizes, the anti-gay side is getting more extreme, more hateful, digging their little bigot heels into the ground. So we have a situation where you can have two gay kids, lets call them Brandon and Derek, who live next door to each other, but whose lives are completely different. Brandon's parents are cool and fun, and they've always had gay friends, and they knew Brandon was gay before HE did. Brandon comes out at 15, gets to grow up basically as a normal teenager. Derek's parents, on the other hand, are fundamentalist Christian assholes. Derek hides his gayness as best as he can, misses out on a normal adolescence, and when he's finally caught with his boyfriend his senior year of high school, his parents disown him and kick him out on the street, but first they rough him up a bit for being such a queer. Derek also has to recover from years of shame and spiritual abuse due to his parents' chosen fundamentalist lifestyle, whereas Brandon is pretty emotionally healthy, for a dumb teenager.

This stuff STILL HAPPENS. This is why It Gets Better was created, to tell kids that, hey, we are appalled and upset that your terrible family/church/school is punching you in the face and throwing you out on the street, but if you stick it out, there are bazillions of BETTER PEOPLE out there, and you don't have to deal with this forever.

According to the Williams Institute, a full 40% of homeless youth are LGBT. Also, LGBT youth are four times more likely to try to commit suicide than their straight counterparts. What is the disconnect? Oh yeah, terrible families, lack of societal support for kids who are different, etc. It may look, to the untrained eye, like things are on the road to getting nice and peachy for the LGBT community, and maybe one day, that will be fully true. But for now, there are still so many kids out there for whom all these headlines about equality really don't mean much, they're just trying to figure out where they're going to sleep tonight.

Luckily, there are people out there trying to make a difference. In Memphis, there are Deb and Steve Word, who, full disclosure again, are also pals of your Wonkette. They were profiled in USA Today last month, because, in addition to their own two children, they have opened their home and become substitute parents for 15 or so LGBT kids over the years:

Shelters and foster homes can be volatile environments for LGBT youth, according to Deb. Some are run by religious organizations that aren’t always accepting. Transgender people often have to classify themselves as the gender with which they don’t identify.

When she talks about her “kids,” Deb’s eyes well up with tears. One of her top priorities when they started taking people in was to instill the family bond that so many of them had missed out on with their own parents.

“I find with kids that have been in my house, if they have sensed rejection from their early teens, they haven’t picked up the living skills from their parents,” Deb says. “If your mother has told you you’re going to hell, how do you move on from there?”

And so Deb and Steve become their parents and feed and shelter these kids, and give them the love and nurturing the kids' own terrible families wouldn't provide, and then they stay available for those kids once they're out flying in the world on their own. They are wonderful, wonderful people.

But what the hell is wrong with some people that this is even a thing in 2015? Newsflash, to any conservative Christian parents who might Google "when is my sodomite son going to hell?" and somehow end up reading this: You are a PARENT. You have ONE JOB, and that is to love and support and nurture your kids. That job does not come with an asterisk that says, "unless Derek goes gay." If you can't handle the gayness, that is on you. Buck up and do the work to figure out how to be there for your kids, to be real parents. It might be tough, but it will be worth it. You are not Tough Loving your gay kids by kicking them out and rejecting them, you are just failing at life, and you should be ashamed of yourselves.

Okay now I will step out of the pulpit and settle down. Good job Wonkers! You made it through me preaching at you, so as your reward, you may now go cleanse your palate with boner jokes.