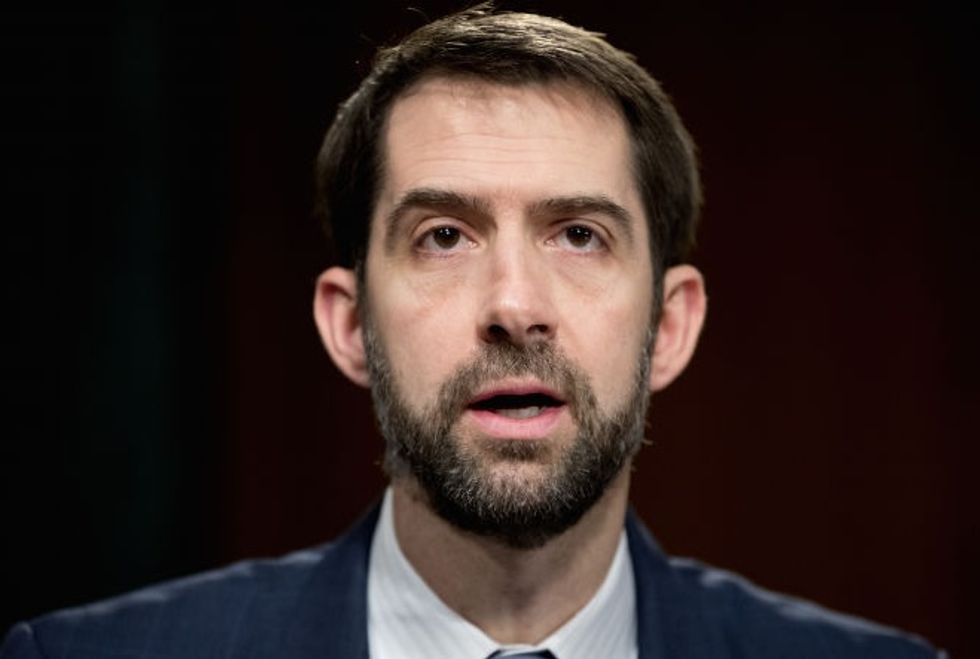 Nearly two months before the R's rolled out their dumb, mean-spirited, guaranteed-to-kill-people "replacement" for the Affordable Care Act, New York Magazine's Jonathan Chait very correctly predicted that every Republican lie about how the ACA was passed would turn out to be true in repealing it. That's some context you may find useful as we examine this piece of lying trash on Twitter from Tom Cotton, a far larger piece of lying trash:

So Tom Cotton doesn't want to rush the ACA repeal through, the way those terrible Dems did when they passed the ACA in the middle of the night with no transparency. A process that took a full year, and which went through multiple committees and hearings, and which passed with, as Chait notes, "two full House majority votes, one Senate supermajority vote and, in fact, many, many, many hearings." True, the final version passed the Senate through the filibuster-proof reconciliation process (the end of democracy when used by Dems, a clever parliamentary move when used by Rs), but all the basics were in place before then.

As Nancy Pelosi, who was actually there and went back to look it up, explained in a series of tweets, in the House alone, the ACA was far from a rush job:

Needless to say, a score of wingnuts jumped in -- and we can guaran-damn-tee some moron will do it in our comments which we don't allow -- with the "gotcha" sound bite of Pelosi saying "But we have to pass the bill so that you can find out what is in it," which, as we've noted before, utterly takes out of context what Pelosi actually was getting at in the full quote:

You’ve heard about the controversies within the bill, the process about the bill, one or the other. But I don’t know if you have heard that it is legislation for the future, not just about health care for America, but about a healthier America, where preventive care is not something that you have to pay a deductible for or out of pocket. Prevention, prevention, prevention — it’s about diet, not diabetes. It’s going to be very, very exciting. But we have to pass the bill so that you can find out what is in it, away from the fog of the controversy.

Whaaaat? You mean Pelosi wasn't saying she had no idea what was in the bill Dems so hurriedly tossed together one night while also planning to take all your guns? And she wasn't hiding it in a basement from her Republican colleagues? Chait notes that the out-of-context line has become a shortcut for Republicans' certain knowledge that the ACA was "passed in the dead of night through a secretive, rushed, undemocratic process." But that never happened, although it is true that Barack Obama and Hillary Clinton ate pizza and laughed all night while watching Benghazi go down in real time.

House Teabaggers Want To Murder All Of Obamacare RIGHT NOW, Or Die Tryin'!

Extremism in the defense of kicking people off insurance for pre-existing conditions is probably a vice, really.

Who Hates TrumpCare More Than Democrats? Other Republicans, Of Course.

The ACA doesn't cover Republicans' self-inflicted wounds, does it?

By contrast, House Republicans do seem bent on passing the ACA repeal and "replacement" as quickly as possible -- the House really did pass the first step of the process at 4:30 AM Thursday, and the Senate has yet to schedule a single hearing on it. Of course, they're not hiding the bill's contents (anymore), but they sure as hell don't want to let the process go very long. Republican leaders want to have the House finish its two bills by the end of March. They have to hurry, lest more rightwing Republicans defect because the bill isn't a straight repeal that would utterly undo the ACA with no replacement (then they can pass another bill so we can find out what's in it). Once that's rushed through, they somehow have to lose no more than two Republican votes in the Senate, where four moderate R's have already said the replacement is unacceptable because they know killing off Medicaid expansion (and steeply cutting what's left of Medicaid) would bite them in the ass in the next election.

So let's just correct Sen. Cotton's Tweet for him, shall we? If he wants to slow the process down and take it deliberately, he needs to start with "GOP needs to act like Dems did with O'care..."

Of course, anything he says after that will be irrelevant, since his fellow teabaggers will set upon him with a pile of rocks like the villagers at the end of "The Lottery."

Yr Wonkette is now ad-free! That means we depend on you to help fund our finely honed bullshit detectors. We couldn't do it without you.