Michael Flynn's Grift To Steal Middle East For Russia (And Himself!) Would Make Sarah Palin Blush 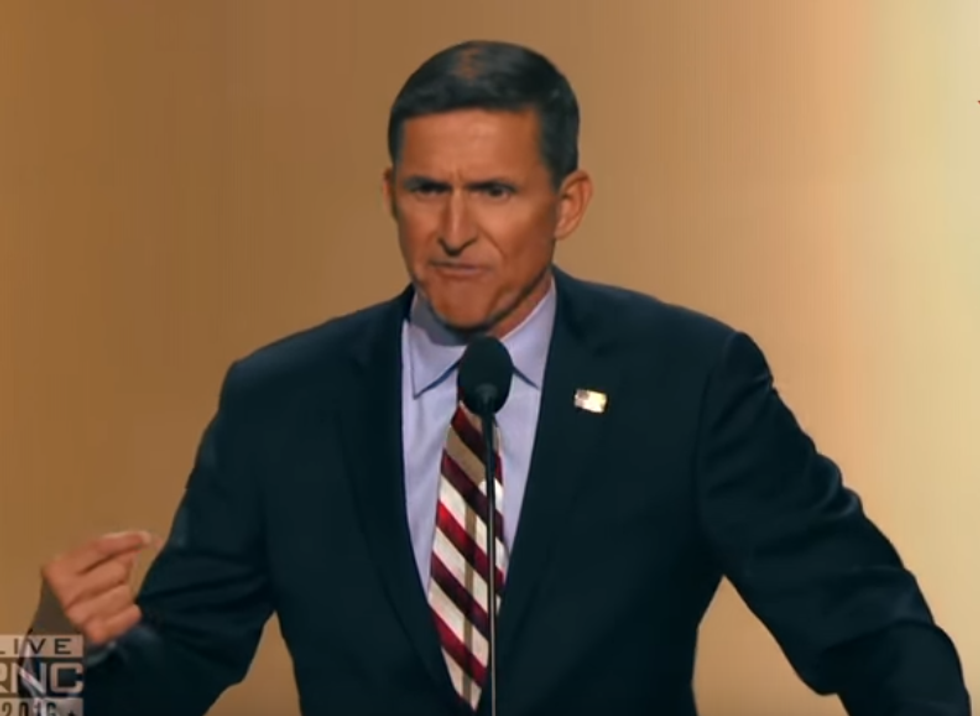 House Oversight Committee ranking member Democratic Rep. Elijah Cummings sent his committee chairman, Trey Gowdy (R-Benghazi), a weird letter on Wednesday. It tells the story of a whistleblower who came forward to spill the beans about what in the hell disgraced literal actual foreign agent Michael Flynn was up to around the inauguration. Apparently he was chomping at the bit to get rid of Russian sanctions RIGHT THE FUCK THEN, and was guaranteeing to anyone who would listen that they would be "ripped up" as soon as Trump was officially president. Why? Well, for one thing, it seems like there is a quid pro quo between Trump and the Russians that involves lifting sanctions in exchange for the Russians' help installing a friendly, incompetent, greedy, probably criminal pussgrabber in the Oval Office. And of course, Michael Flynn had been working a grift before the election with a company called ACU Strategic Partners to enrich himself and his Russian pals, by enacting a "Marshall Plan" in the Middle East that involved building "proliferation-proof" nuclear reactors. (And who would get the leftover uraniums out of this deal, which could then be used to make nukes? That's right, it is Russia, LOCK HER UP, LOCK HER UP!)

In the letter, Cummings demands Gowdy get off his ass and subpoena the White House for Flynn documents from this time, noting that Gowdy's earlier excuse -- that he didn't want to do anything that would interfere with Robert Mueller's investigation -- is now invalid, because Cummings held back information about this whistleblower at Mueller's request, and he's releasing it now because Mueller fuckin' said he could, because Mueller is already finished investigating this shit. What did Mueller find? That's for Mueller to know and the Trump White House to find out!

Let's look at the letter, then after that we will go down a wormhole into the hell of Just Asking Questions (your favorite!):

Literally, on Inauguration Day, Flynn was texting folks like "KA-CHING! Who's ready to get rich pretending to be a public servant? LOLOLOL!"

The whistleblower says that day in January he met Alex Copson, the managing partner of ACU Strategic Partners. Copson, according to Cummings's letter, was sporting a grifting boner so raging he could have used it to pole vault through the Reflecting Pool:

He was so excited! And Michael Flynn was literally texting him during Trump's grotesque Inaugural speech to say he was excited too!

To recap, these are the damning quotes from Copson so far:

OK, we are fooling about the dick pic. We don't know if Flynn has ever sent his buddy Copson dick pics, and neither does Elijah Cummings. (We also don't know that he DIDN'T, so keep that in mind.)

"Recolonize the Middle East," huh? And all with this handy plan in place to put MANY MORE United States troops on the ground!

So, Michael Flynn was working on a "Marshall Plan" for the Middle East, to enrich Americans and Russians (AND GIVE RUSSIANS URANIUM) and dude is talking about literally recolonizing the Middle East? Hmmmm, that is weird! Sounds like the vague outlines of a plan to get less-than-patriotic greedy grifter types in America -- Trump family, Mercer family, Erik Prince, etc.; Sarah Palin will probably write a book of Bible devotionals about it -- together with the Russian government and its oligarchs to rape, pillage, loot and steal the Middle East, and when they're done with that, they'll grab it by the pussy some more.

And this will somehow make the Middle East better, because KA-CHING! Whitey has come back to recolonize, and it would hurt their bottom line if the natives were restless!

Back in October, we bookmarked a WHOA IF TRUE Twitter thread from corporate-intelligence guy Eric Garland, and we're not going to reproduce it all here, but you should go read it, because it seems he might have been on to something. The broad outline is that Russia put in place a plan to steal the Middle East's resources, and over the years cultivated "traitors with weird, mad power fantasies" in America, like Flynn and others.

Meanwhile, Blackwater Sadist-For-Jesus Erik Prince, as Garland said in October, is "already rogue, building mercenary armies" and living in the United Arab Emirates. Remember that weird meeting in Seychelles in January 2016 (just before the inauguration!) between Prince, a Russian fund director who likes to cross streams with Vladimir Putin during sleepovers (allegedly), and the fucking crown prince of Abu Dhabi, to set up a "back channel" between Trump and the Russians? That was weird, right?

Meanwhile, Prince has his hand out begging Trump to let him turn Afghanistan into his VERY OWN MURDER COLONY, and Prince and fellow traveling creeper Oliver North (OLLIE FUCKING NORTH!) are pushing a plan to convince Trump to let them create a grifty, top secret B613 of off-the-book spies who can run shit in whatever countries they want.

As Garland noted, this would be hard to pull off under a normal American president. But what if ...

What if that's the whole point of this? What if that's why Russia cultivated Trump in the first place? To -- eventually, one day! -- get a new form of government in America that would be an autocracy/kleptocracy just like Russia, one that would be DTF with a plan to slice up the Middle East, and let a bunch of rich guys from America and Russia make off with the profits? Hell, the number of people involved in this scam seems so vast, Trump actually becoming president might not have even been part of the original plan. But then BING BONG, 2016 happened, Trump became the GOP nominee, and the fact Russia got to off Hillary Clinton's political career in the process was just icing on the cake.

Michael Flynn lost his job as national security advisor after a solid few weeks of work, so he doesn't get to be a part of whatever these fuckers are trying to do now. But over at Crooks & Liars, Karoli Kuns points out that, while Russian sanctions haven't technically been "ripped up," Donald Fucking Trump sure as hell isn't enforcing them, and the new ones Congress passed by a margin of one million to zero aren't being implemented. That would be bad for his Russian masters' bottom line, and also for his own finances, most likely!

Is the plan still full-speed ahead, even if they have to say, "Fuck that Michael Flynn guy" now?

We know there's a lot of JUST ASKING QUESTIONS in here, and also a lot of THE FUCK YOU SAY, but nothing is impossible anymore. The grifters are in charge, in Washington and in Moscow (AND THEY'RE PALS WITH EACH OTHER!), they're ready to loot their own countries and the rest of the world, and they don't fucking care who they hurt in the process.

But now Flynn is flipped, and he got to skate on a tiny baby charge, in exchange for turning on everybody else. And now we're learning about this whistleblower from Elijah Cummings, because Robert Mueller has already figured this shit out.

What in the hell kind of nuclear bomb of information is Mueller holding?