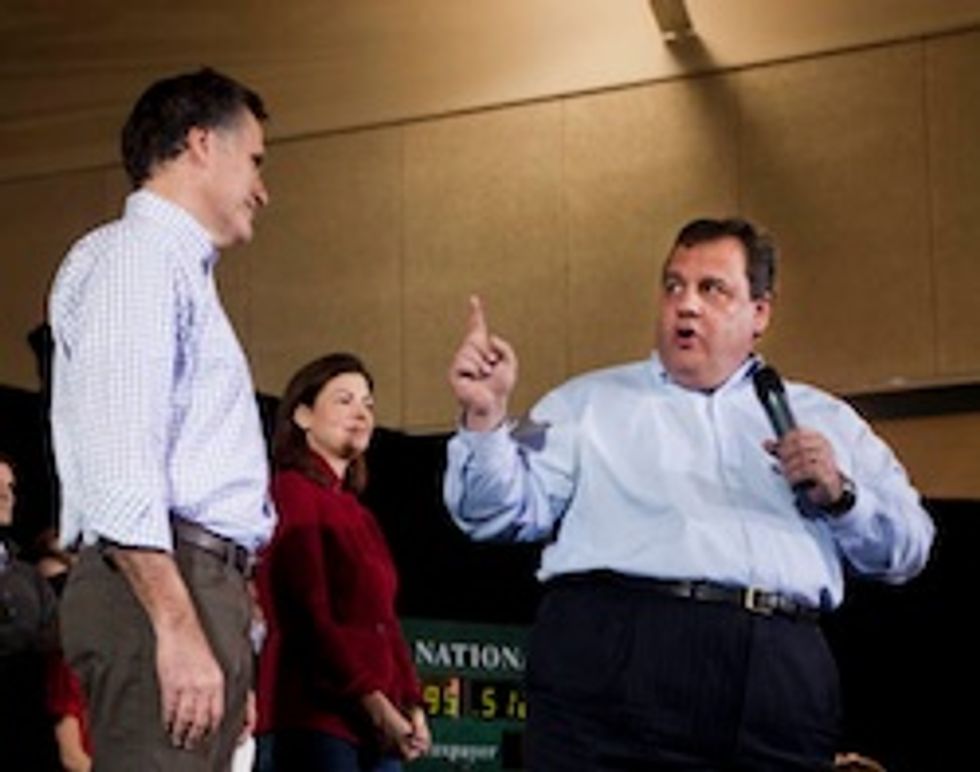 All of these conservative dingdongs out there arguing forTHE BOLD VICE PRESIDENT OPTION OF DEATH don't seem to acknowledge that they're forcing their presidential candidate to essentially humiliate himself and run a bottom-heavy ticket, as if that's a sign of campaign wellness or augurs an effective administration. They want either Paul Ryan or Chris Christie because they consider Mitt Romney a weak, pathetic creature, and so in choosing either of them, Romney would be acceding as much. (And of course he is, but if he wants to win the election, moving further in that direction probably isn't the way.)

David Frum, whose opinions will just steel conservatives' determination to do the opposite, correctly sees "the Ryan proposal [as] a test of Romney's leadership," as in he needs to prove that he can turn them down. Another way of framing this: Is there a greater possible display of weak leadership than in letting Bill Kristol pick the vice presidential candidate again? After last time? When he got John McCain to pick that idiot -- who was it -- had a daughter or something -- from the TV? These people aren't Mitt Romney's friends; it's just another inter-party power exercise for them in which their top priorities are (1) making themselves the shot-callers and (b) getting another line on the resume of their preferred 2016 candidate. Because there's really no excuse not to pick Rob Portman otherwise.

And yesterday on the Washington Post website, torture-loving Christian columnist Michael Gerson offered even more humiliating advice for Romney by advocating for Chris Christie, who will protect the delicate flower atop the ticket and fight back against those meanies in Chicago. Aww.

Gerson makes his case through the traditional Republican template of arguing for anything: THINK OF IT LIKE WAR (ANY OF WHICH I ALMOST CERTAINLY HAVE NOT FOUGHT IN):

But the trend of the last few weeks favors Chris Christie. The 2012 election has already proved to be a vicious, negative slugfest. In the last few weeks, Romney has been accused of committing a felony, avoiding taxes for a decade and contributing to the death of a woman with cancer. The squeals of various fact-checking outfits go ignored in Chicago. Romney, his family and staff are likely to feel offended and aggrieved. The question they are probably asking themselves is not: Who is the best vice presidential pick? Rather, it is: Who is the best wartime vice presidential pick?

Your Wonkette had to re-read that a few times -- like, does Gerson really think that foreign policy will be such a determinant that he needs to make it his top priority in selecting a running mate? -- before we remembered, oh right, he has been talking about about the need to defend Mitt Romney against mean attack ads this entire paragraph. It's just that "wartime vice presidential pick" isn't really used as a metaphor for something so pathetic as "someone who's not scared of the teevee commercials" that often.

Something less than an unappealing spokesman would be a good thing to consider, though!

He needs someone to engage aggressively on his behalf in the daily D-Day this campaign has become.

WELL, if we were a Republican, we'd be demanding a written apology to the veterans of our Greatest Generation on Tom Brokaw's desk within the hour; but let's just call him a toolshed instead.

All four leading vice presidential prospects might play this role. Christie would clearly play it best.