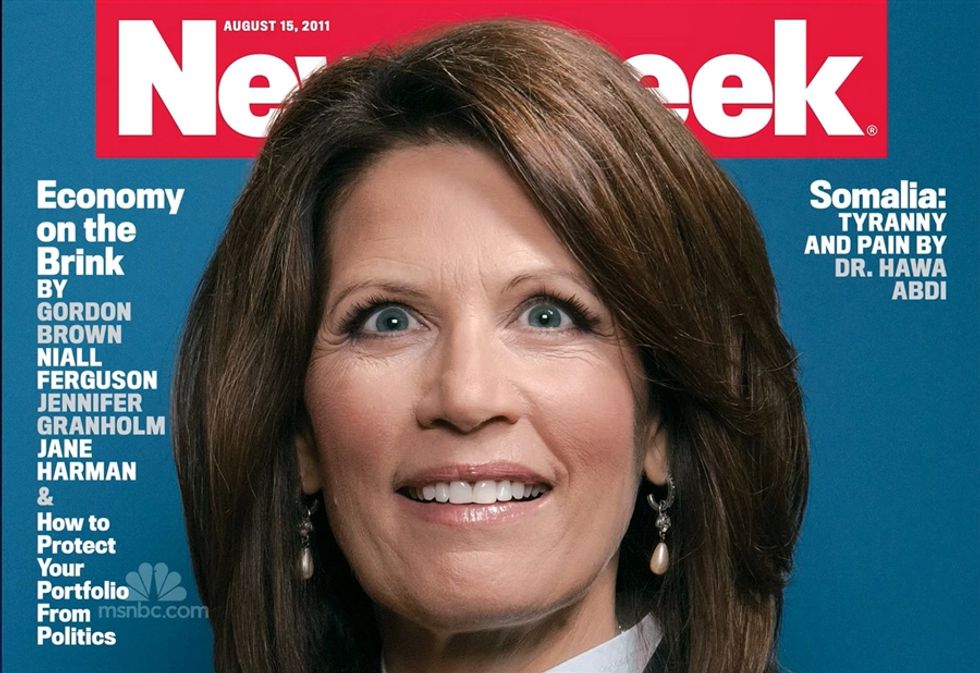 Michele Bachmann leads a rough life. Despite being a Congresswoman, former presidential front-runner, and a national spokesperson for Crazy Eye Syndrome, she has a problem. As a straight person, she is tired of being bullied by the gays all the time. Bachmann recently went on the Lars Larson show to discuss CPAC, and discussed being the victim of bullying, via Right Wing Watch:

“And the thing that I think is getting a little tiresome is the gay community have so bullied the American people and they have so intimidated politicians that politicians fear them and they think they get to dictate the agenda everywhere. Well, not with the Constitution you don’t.”

When will America come to terms with the decades of oppression faced by straight people at the manicured hands of the gays?

And here’s the crazy(er) part: that’s not the craziest thing she said in the interview!

Before we get to the other crazy, let’s put the first bit of paranoid victimhood in context. Bachmann was lamenting the veto of the anti-gay bill in Arizona. Of course, for Bachmann, the bill was about the religious liberty to deny people their civil rights in a secular way. She went on to say:

First off, there are no religious liberties at stake here. This is a red bull or red herring or some term we learned then forgot in middle school. Every American is still free to worship whatever holy tree, magic skygod, or pantheon of deities they so desire. In fact, the government will go so far as to give those organizations tax-exempt status! It’s just that in a free society, we decided a long time ago who gets to sit at the lunch counter.

However, we do agree that the gays need to use the Constitutional process to get things done, even at the state level. Where in the Constitution do gays find the freedom of assembly, huh? What hippie-dippie land do gays think would allow anyone the right to petition the government? And everyone knows that it is against the law to involve non-gays to petition the government, like big business leaders. Those are all clear bullying tactics that have NO PLACE in Michele Bachmann’s America. She would never -- NOT EVER -- kowtow to big business. SHE HAS PRINCIPLES, PEOPLE.

“I just thank God that there’s a billionaire or two on our side,” Bachmann told conservative radio host Lars Larson during an interview at the 2014 Conservative Political Action Conference.

Oh. Ok, so maybe we overstated her principles a little bit. It seems that it is ‘bullying’ when lots of folks rally to stop a bigoted law from being signed, but we should thank god when billionaires spend millions of dollars intimidating voters to get conservatives elected. But wait! Just having a Koch addiction is not enough for Shelly. You see, even though those billionaires, and many others, spend millions of dollars to help Republicans, BACHMANN IS STILL THE VICTIM:

The Minnesota Republican asserted that Democrats were part of “an intimidation movement” to stop billionaires from supporting conservative causes.

We liberals are hiding out at every elite country club in the nation, just waiting to intimidate outrageously wealth people. It’s a good thing we have Obamaphones to help us communicate.

“I’m sure that the donors on our side don’t like to have their names vilified and that’s what this is about, intimidating people from giving money to our cause, that’s it,” she opined, adding that Democrats should be prosecuted under the Racketeer Influenced and Corrupt Organizations Act (RICO) for their intimidation of billionaires.

YES! Maybe George Soros can join the lawsuit, or perhaps any of the Hollywood liberals who are so regularly vilified by the far right. Hahahaha, just kidding. Everyone knows that only liberals are bullies, and should be jailed for disagreeing with High Lord Koch.