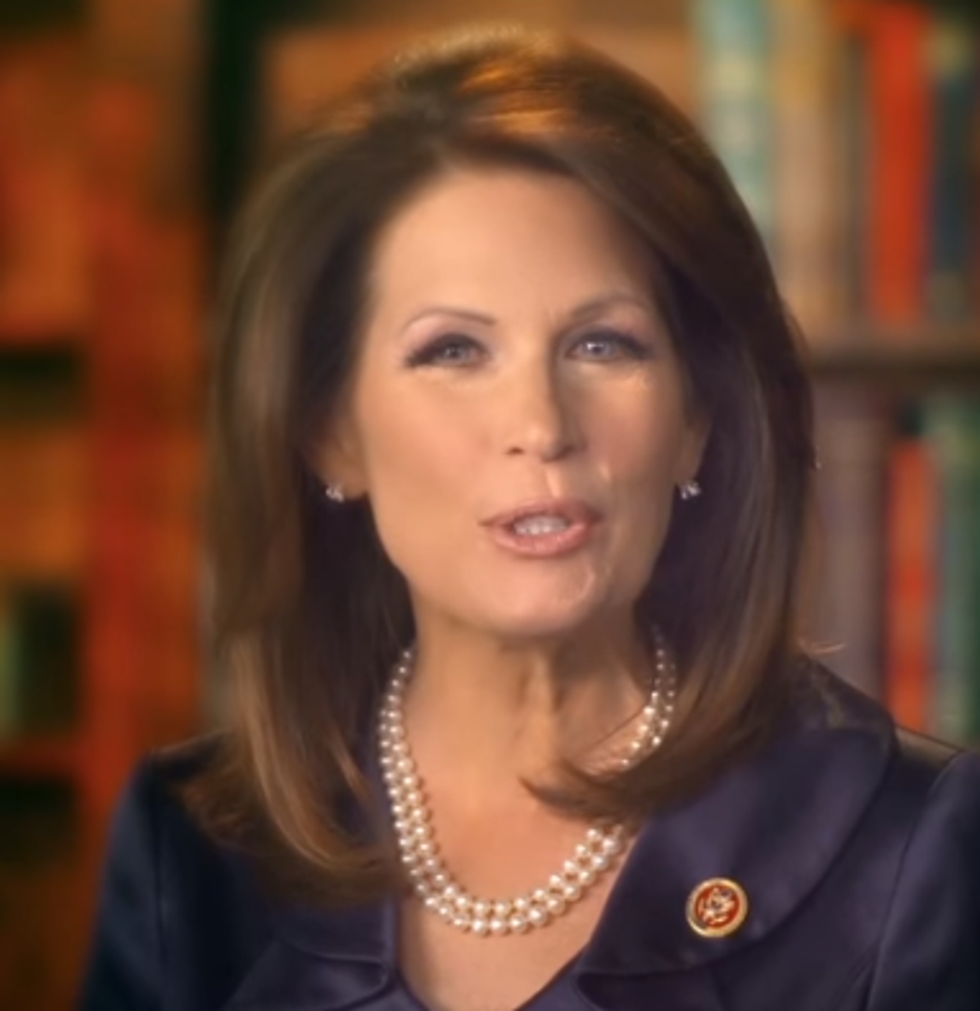 Educate us on the ways of the Lord, o wise one.

[contextly_sidebar id="2cKJWzXAp0HP4qDGa8pRjqs2ksaFNa59"]How grateful are we that Michele Bachmann refuses to go gently into that good night? She rages, rages, at the dying of her political career, and we are the recipients of that gift. Michele opened up her AOL Tuesday and saw the news about the Brussels terror attacks and OH MY STARS! She knew it was time to plug her giant crazy eyes into God's divine nipple plates so she could discern why He, in His infinite wisdom, decided a terrorist attack was part of His plan for that day, and wouldn't you bet it was God's way of taking that Kenyan Obamacrat Barry Hussein Soetoro down a few notches?

So she sat down, pulled out a Sharpie, and started writing words on the WorldNetDaily part of her computer screen about what the Lord was revealing at her, about how God uses ISIS attacks to give Obama swirlies and wedgies and stick "Kick Me" signs on his back:

[M]aybe our president’s humiliation comes in a manner so devastating it makes one wonder whether the Creator of humankind isn’t reminding this world of the inferiority of foolishness in the face of wisdom.

The president once again mocked his nemesis, the Jewish people and the nation of Israel, by cleverly turning the international press corps toward his brilliant work in Cuba, instead of covering ongoing Islamic attacks against the Jewish state as outlined that very same day at the annual pro-Israel AIPAC meeting in Washington, D.C.

History changed less than 24 hours later in the blink of an eye, and the rug was pulled out from under his well-laid plans.

His well-laid plans to ... (???) ... Michele doesn't fucking know. God didn't tell her that part. She DOES remind us though that Obama said ISIS was "contained" the day before the Paris attacks happened, so we're guessing that was just another time The Big Guy In The Sky pants-ed that silly Obama, by killing innocents. SILLY TRICKSTER JESUS.

To help make her point, Michele opened her pop-up prophecy Bible and paraphrased some words she saw to make them about current events:

Bits and pieces of flesh and blood, some Americans, all innocents, were scattered – scattered to further the act of conquest by Islam against the continent once enlightened by the beliefs and values of Western Christendom.

Three men committed to a false God and a doctrine of demons chose death to advance Western civilization’s defeat.

And to fulfill Christ's holy plan to steal Barack Obama's lunch money and spread rumors that he had a boner during third period today, don't forget that part, Michele!

[contextly_sidebar id="RyCIXRAsPwu2aClyvBOSLLWfgMLvNvlM"]Now you may say Michele Bachmann is fucking insane. We wouldn't argue. But before you jump to conclusions, you should remember how it was Michele who correctly identified Obama as the foretold Antichrist, who would lead the coming One World Order, once God is done teasing him with noogies, of course.

[contextly_sidebar id="ewtROTULrzczQlwzleY7EsD9axsiPzrN"]It was Michele who correctly assessed that America has all the #problems right now because God is giving us a spanking on our red, white and blue heinies, as punishment for electing Obama. That's obviously the case, obviously.

[contextly_sidebar id="udeCummNhrhlDXuLTtMB87IPCqt6IINF"]And of course, it was Michele who correctly predicted that, because Obama is doing the End Times to everybody, Jesus would cometh back upon the clouds and rapture all the Duggars and Palins and the Bachmanns and all the other good white families who love Him so hard, and that's why all those people are gone now. Bye Duggars, bye Palins, bye Michele, oh wait WHY ARE YOU STILL HERE? Any day now, we're sure.

So considering her track record, we just gotta ask: WHO'S THE INSANE ONE NOW, HUH? Obama or Michele Bachmann? That's right. It's dumb Obama.