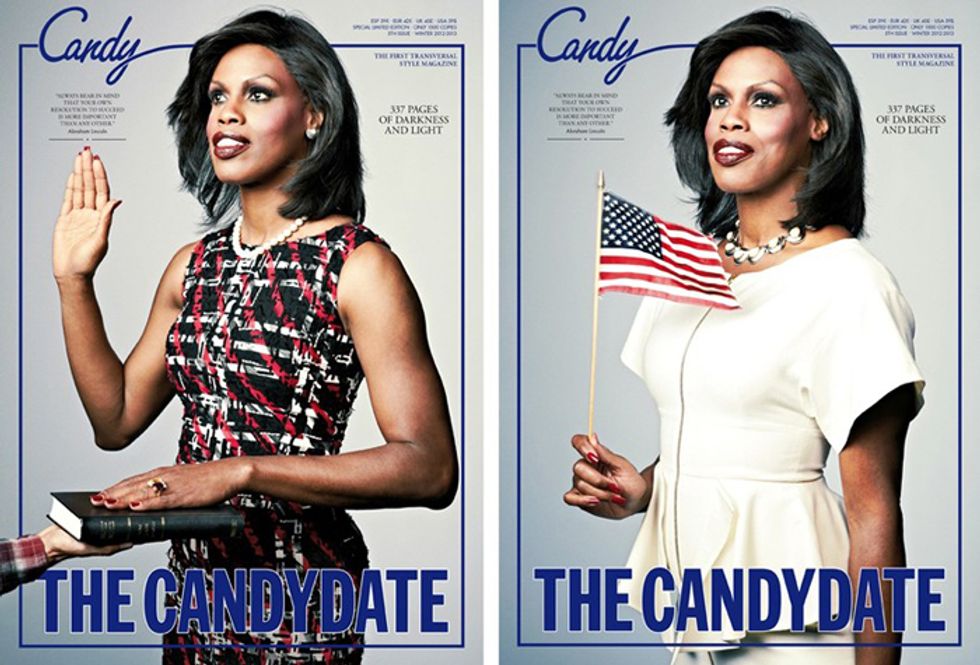 You are of course familiar with Candy magazine, America's first and most beloved "transversal style" periodical. (Not to be confused withCandy magazine, the magazine dedicated to Filipino youth.) Previous Candy covers have featured James Franco and Chloe Sevigny in drag because hey, why not? Those people are super boring, though, compared to this month, which stars our famous FLOTUS, Michelle Obama! No, not actual Michelle Obama, although we must acknowledge the excellent wardrobe (note sleevelessness!). The cover reads, "THE CANDYDATE," so we guess Michelle Obama is running for office and didn't bother to tell anyone except our nation's first transsexual magazine.

They say that being represented by a famous transsexual model is the sincerest form of flattery!

Brad Goreski, who styled trans model and '90s "It" girl Connie Fleming for the shoot, channeled all-around amazing person who we'd like to be one day/political fashion icon Michelle Obama, hitting the usual marks -- the structured, elegant dresses which show off her arms as well as her perfectly coiffed hair -- while serving some over-the-top patriotic realness.

We noticed that she is being "sworn in" by someone wearing some sort of lumberjack shirt, so it's even more exciting to wonder what political office Transsexual Michelle Obama is taking over now.

Candy publisher Luis Venegas told Dazed Digital (via the Fader) that he'd actually wanted to do this cover since the 2007 presidential election, when a black candidate and a female candidate were called "controversial" nominees. Reflecting on the future of politics, Venegas asks: "When [will] these archaic walls break down and the White House will be occupied by, for example, a black, transsexual woman?'"

Not to worry, Luis Venegas! We are with you, Mr. Venegas! But we'll probably want to start electing some non-felon transgender people to lower offices first.