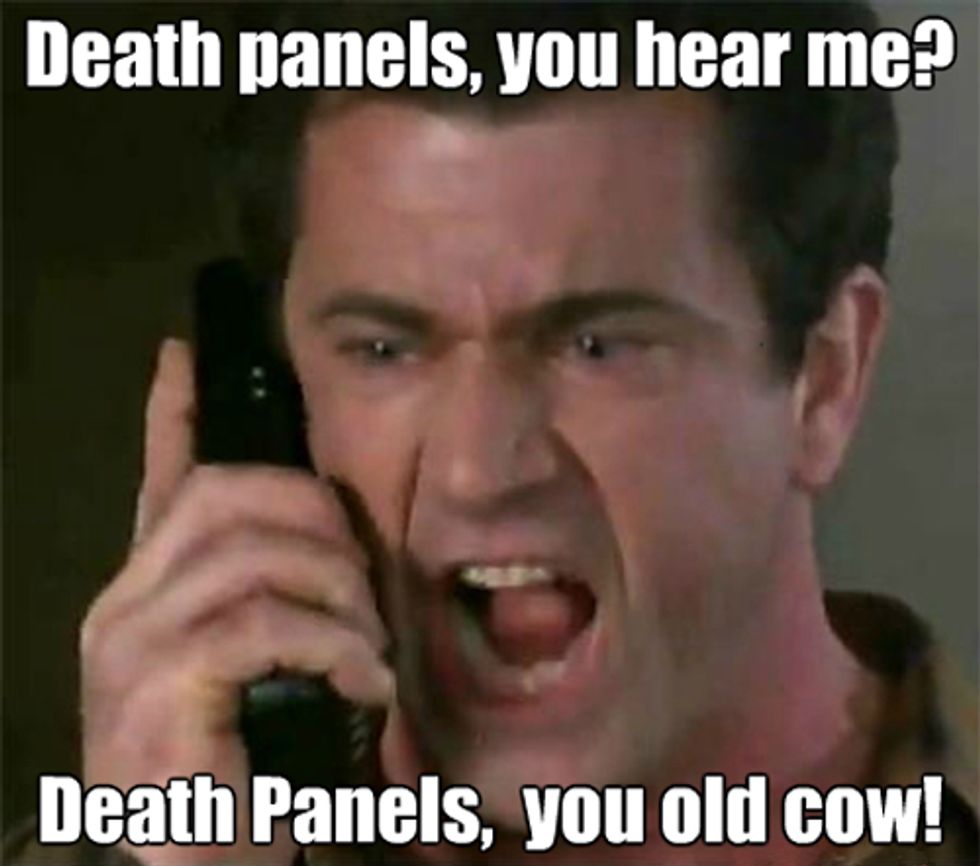 Look, politics is serious business, and if you're in a tight race, anything goes. If you're the Michigan GOP, that even includes sending out a mailer that urges people to call a Democratic candidate's 91-year-old mother, who is in hospice care at a nursing home, so they can tell her just how much they hate Obamacare:

The mailer warns that “Obamacare and John Fisher could leave us bedridden,” and encourages voters to call a number that rang at his mother’s bedside, according to EclectaBlog.

Fisher’s campaign told Mlive.com that his his mother was suffering from congestive heart failure, and was being cared for by hospice.

Haw haw, that'll teach that liberal punk to have a mother who's dying! It seems only fair, really, since the Democrats are in favor of a law that has death panels, will force women to have abortions, and makes nuns violate their holy vows.

This isn't the first flyer to include a phone number so recipients can call John Fisher to give him a piece of their mind (not that they can spare the little they've got); past flyers, however, included only Fisher's home number, which the candidate says "worked to my advantage, because most people agree with me that policies that improve life for families and seniors are good for Michigan."

In a statement, Fisher said the new flyer was a new low:

But to direct people to call a suffering woman who deserves peace and comfort is beyond the pale ... Their lack of ethics and contempt for personal privacy is just another reason for people to question what -- or better, who -- the Republican Party stands for, so that they can make a wise decision at the ballot box on Nov. 4.

Fisher called for his Republican opponent, Brandt Iden, to repudiate the flyers sent by the state party, but Iden only issued a statement saying that the flyer wasn't sent by his campaign, so hey, don't go blaming him for it:

Obviously, as you know, it was not sent out by our campaign ... I don’t condone negative campaign tactics and it’s not something my campaign has done or anticipates doing.

That's awfully nice of him, isn't it? He seems very nice.