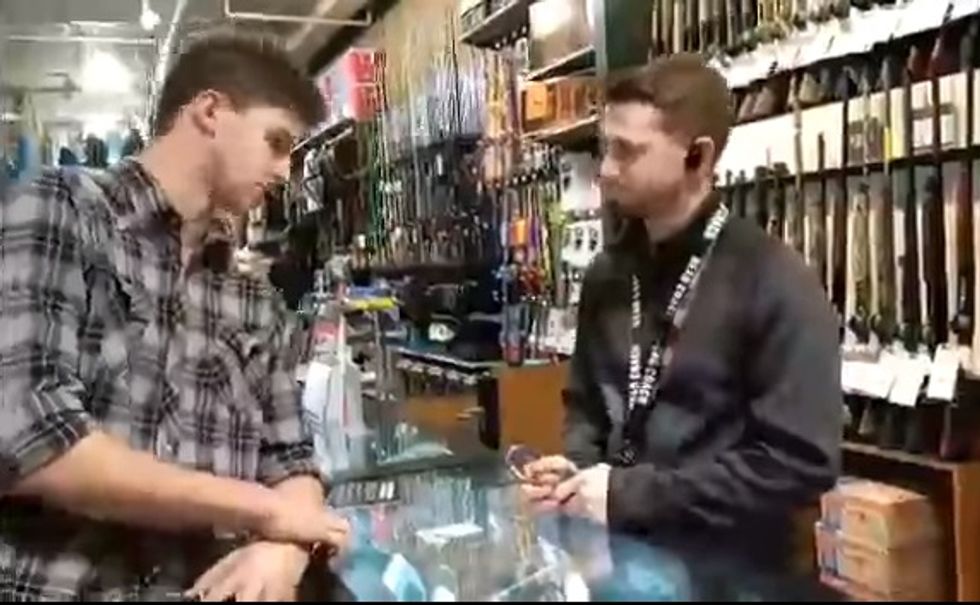 I wish to complain about this parrot, what I purchased not half an hour ago...

Great legal drama in Michigan as an 18-year-old would-be shotgun haver is suing Dick's Sporting Goods for age discrimination because it now will only sell long guns to people 21 and over. Young Tristin Fulton attempted to purchase a shotgun at a Dick's store in -- appropriately enough -- Battle Creek, Michigan, last week, and was informed of the new store policy. His attorney, Jim Makowski, accuses the store of violating his client's civil rights and of being mean old meanypantses.

While the lawsuit asks that the store be ordered to change its policy and award Fulton $25,000 in damages, Makowski said he'd be satisfied with a reversal of the policy, or for Dick's to be forced out of the business of selling firearms altogether in Michigan if the chain won't respect Americans' sacred right to buy guns once they turn 18.

Oh, yes, Tristin's dad runs a shooting range that also teaches concealed-carry courses, and there is no chance at all that this whole thing will be awfully good for business. The name of the shooting range is Nameless Dickweasel's Shooting Emporium Somewhere In Michigan, Look It Up Yourself But Do Not Post The Phone Number In The Comments, You Jerks. Dad also took this incredible cell phone video of the attempted purchase, to show how cruelly Tristin's rights were denied. Come and see the utter lack of violence in the system:

Makowski said the refusal by Dick's to sell his client a gun violated the lad's rights under Michigan's Elliot-Larsen Civil Rights Act, which prohibits discrimination on the basis of age. Also, that his client is incredibly like another young activist who fought for her civil rights:

“Saying he could’ve gone elsewhere, every retailer says that,” Makowski told TPM Friday. “‘No, Mrs. Parks, you didn’t have to ride at the front of the bus.’ That’s where we’re at. Fifty years ago, it may have been African Americans in this position.

See? Exact same thing. But wait! Makowski, who is clearly as intent on ginning up publicity for his law practice as Tristin's dad is for his shooting range, had many more terrific analogies that will no doubt make for an inspiring movie monologue:

Mikowski also suggested the new policy was the “same thing” as if the store decided to “stop the threat of terrorism” by “stopping selling to Muslims.” [...]

“What they are doing is illegal and it’s wrong,” he said. “They’re punishing a whole group of citizens for the actions of one person."

You can just hear the Battle Hymn of the Republic swelling in the background, can't you? Somehow, Mr. Makowski didn't find a way to cram Gandhi, Martin Luther King, or Mother Teresa into his sound bite, but maybe he's saving something for the second day of the story.

Still, we suppose we shouldn't mock. Indeed, maybe the comparison to Rosa Parks will be prophetic. Perhaps one day, entitled dickheads whining about how cruelly the world has abused them will all be compared to this young man, as in, "Truly, my client is The Tristin Fulton of Mercedes owners who didn't get covered parking."

Yr Wonkette is supported by reader donations. Please click here to send us money, because we are the Rosa Parks of inappropriate analogies.