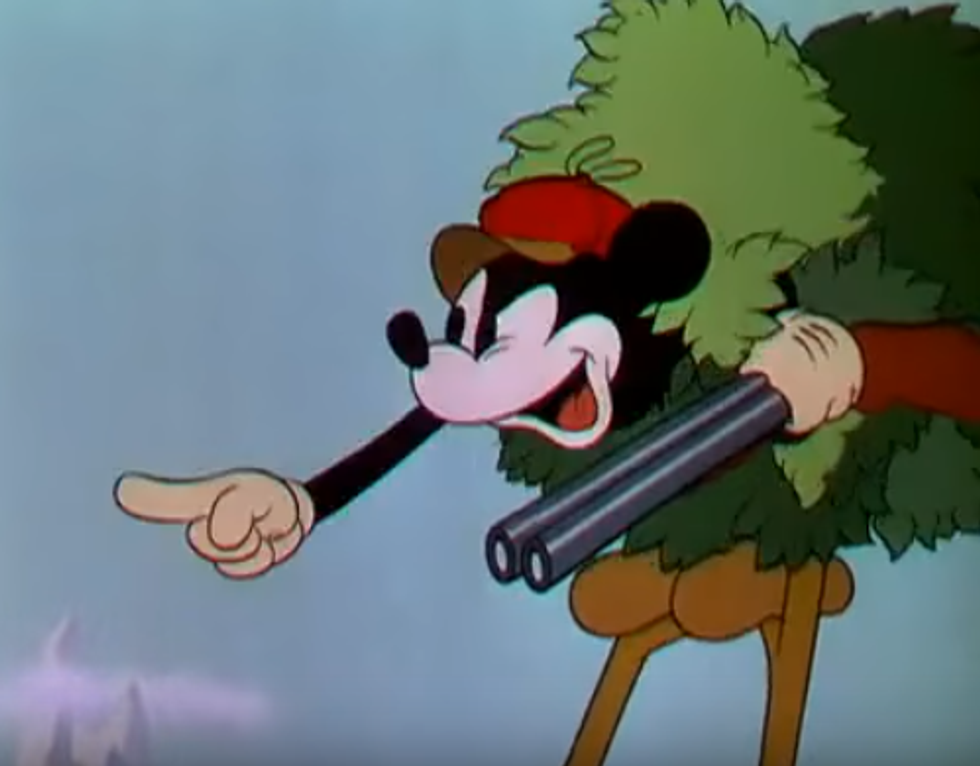 He's comin' for ya, Christians.

Well, folks, it's hunting season. In fact, the Christians seem to have overbred this year, and so "They" (AKA big corporations like Disney AKA Mickey Mouse and all his pals) have declared "open season" on Christians. Wait what? That's unpossible!

But it's true! Mickey and his heterodentia lifemate Minnie apparently sent Pluto off to get dog-trained to sniff out the urine trails of Sincere Christians, and now, according to some no-name group of wingnuts called Texas Values, they are doing the war on Christianity. Oh, we are not sure if they literally believe the cuddly Disney characters are personally murdering the Christians, but they sure are upset about how Disney and other big corporations successfully pressured Georgia Gov. Nathan Deal into vetoing the insane anti-LGBT hate bill that recently passed the state's legislature.

Here is the very sad statement from Texas Values. Let's correct it together:

It’s striking that the day after Easter, churches in Georgia are told their freedoms are not that important to protect. It’s clear that corporate giants like Apple, Disney, NCAA, Intel have finally come out of the closet and declared public war on the religious freedom of clergy and religious schools, as was the protection in Georgia’s very modest HB 757 that they worked to bring down.

It’s sad that Apple, Disney the NCAA and others won’t even allow pastors to have religious freedom protections on marriage in Georgia, like they do in Texas.

Pastors already have "religious freedom protections," every-fucking-where in the United States. They can marry whom they wish, as has always been the case. One part of Georgia's bill reiterated that (we say "reiterated" because ALL THE FUCKING LAWS IN THE UNITED STATES allow for pastors to pretty much do what they want where marriage is concerned), but the rest of the bill was about letting wingnut Christians deny basic services to people who gross them out.

Let's skip forward, to where Mickey Mouse literally axe murders Jesus's head off while singing "It's A Small World After All" to all the Christian wives and children, as Donald Duck randomly interjects, "OH BOY OH BOY OH BOY, WHERE'S YOUR GOD NOW, PUSSIES?" and Goofy is probably being silly, because Goofy is always so silly:

Will Disney now ban you from wearing a cross outside your shirt at their parks.

Probably yep no crosses in the Magic Kingdom no siree bob.

Will a Catholic priest be forced to remove his white collar when he takes a picture with Mickey Mouse?

Gonna have to take his priesty pants off too, because the new, improved, Christ-hating Mickey Mouse likes to gaybone priests in their inner sanctum holes.

Is this peak whiny-ass wingnut? Regrettably, no. These people are toddlers, and they will continue to whine until they either get their way or die.

Anyway, Mickey Mouse, please stop killing Jesus if that is what you are actually doing. But if you're just making fundamentalists itch in their fee-fee holes by being nice to gays, then carry on, Mouse, carry on.