Midterm Madness: How Many Millions Will The GOP Spend To Defend Georgia's Sixth? 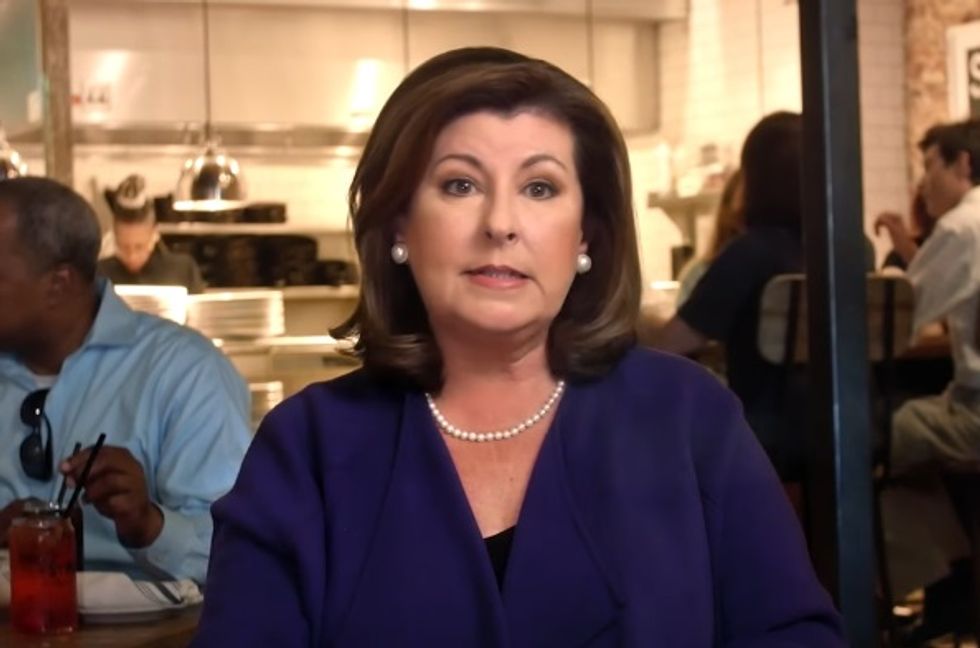 'She wouldn't vote for you. Or let you vote.'

Georgia's Sixth is suburban Atlanta. It's the wealthiest district in the state, and very well educated. There's also large contingent of Jewish voters, and good old fashioned Southern folk still clinging tight to their guns and religion. As the spawning pool for Newt Gingrich, the Sixth has been a safe seat for Republicans for decades, but Atlanta is growing rapidly. It's surrounding area has becoming increasingly so diverse that Trump barely won the Sixth by 48 percent in 2016.

Charts and graphs via Statistical Atlas

You may remember the bitter special election that was held in the 6th last year to fill the empty House seat left by disgraced former HHS Secretary Tom Price. Democrat Jon Ossoff narrowly lost to Republican Karen Handel in the most expensive House race in history and conservatives rejoiced in their new corporate-controlled moral majority.

Karen Handel Not So Big On Letting People Vote, Which Is A Good Reason Not To Vote For Her

You know what they say: Vote Your Ossoff.

We Will Have Karen Handel To Kick Around Anymore!

Turn that frown sort of sideways, let's see how that looks huh?

Since arriving in Washington, Handel has sat around rubber stamping conservative wet dreams like the Trump tax cuts (for the super rich) and repealing Obamacare. Handel has been busting her ass to get in the good graces of the super rich, recently sponsoring a bill to make it easier for corporate titans to merge with one another (*cough*Sinclair), and another a bill to abolish an Obama-era program that incentivized states to combat obesity. She's also has been voting for a slew of bills aimed at making life harder regular people, like expanding concealed carry, placing strict limits on abortion, limiting the legal rights of handicapped/disabled people, and easing banking regulations. Oh, FYI moms and dads, on Friday Rep. Handel voted for that Freedom Caucus farm bill that would have crippled SNAP.

To be fair, Handel has only been in office for less than a year, however she spent the special election bragging about her legislative bonafides only to be just another bench warming partisan hack.

Come on, sugar, give Karen Handel some money!

There are several people opposing Handle in November, but we're only going to focus on the top three candidates. Sorry, Steven Knight Griffen!

First there's Bobby Kaple, a local Atlanta TV anchor who walked away from the news desk to run for public office. Kaple has a tearjerker ad where he talks about how the birth of his premature twins spurred him to get into politics.

Kaple's running on a couple of main issues, but has a rather robust platform. Aside from expanding healthcare coverage, he supports DACA, gun reforms, wants to increase environmental protections, and is an advocate for criminal justice reform. He's garnered the support of several state legislators, and been endorsed by former Sen. Max Cleland, and former Rep. Buddy Darden, which arguably makes him the front runner.

There is also Kevin Abel, and he could be the poster child for the American Dream. He emigrated to the US from South Africa at the age of 14, went to college, and started a successful technology consulting business in the Atlanta area. He's got a brutal campaign ad in support of DACA, and made affordable healthcare a focal point of his campaign by talking about overcoming stage 4 Lymphoma. Kaple's running as a moderate, and recently told the Atlanta Jewish Times, ..."I think the real systemic, endemic problems in this country are in Congress, and it’s moved toward the extremes." Then there is Lucia "Lucy" McBath, the only woman running in the race. If her name sounds familiar, that's because she's the mother of Jordan Davis, who was killed at the age of 17 in 2012. A 47-year-old white man fired 10 rounds into the passenger side of Davis' friend's car, because he thought their music was too loud.

After her son's murder, McBath joined several gun reform advocacy organizations and began lobbying Congress and the Obama White House for gun reform. She was invited to the Obama White House for an address on gun violence, tapped as a campaign surrogate by Hillary Clinton, and spoke with the "Mothers of the Movement" at the 2016 DNC. She's a bit rough around the edges as major candidate, but she comes with the network she needs to make this more than a quixotic run.

How Many Sociopaths Did It Take To Kill This Unarmed Black Boy? One, And That's Not Funny

12 People Pretty Sure This Fellow Tried To Kill All These Children, Not Sure About The One He Succeeded With

McBath was initially running for the Georgia state House, but her supporters convinced her to run for the 6th after the the massacre at Marjory Stoneman Douglas High School in February. Though she's running ostensibly on a platform to stop gun violence and push commonsense gun reforms, McBath is also a strong proponent of a public healthcare option, raising the minimum wage, opposing the Trump tax cuts (for the super rich) and Trump's trade war.

We also feel it necessary to mention independent candidate Carlton Heston, a mysterious young musician running on a pseudo-libertarian platform. Heston's declaration of candidacy form, prominently featured on the candidate's Facebook page, lists "weather controller" as an occupation. Heston wants to abolish all income tax in favor of a land value tax, which is a weird pipedream that gets lost in the the weeds very quickly. Heston has vowed to end the opioid epidemic by promising to both "whoop Pfizer's ass," and "whoop Purdue Pharma's ass."

The outcome here, both in the general and in the primary, is likely to come down to who has the most money. Handle has been quietly been rebuilding her war chest with the help of shady PACs and corporate contributions. The most recent FEC reports show her already bringing over $6 million this year, with almost a million in cash on hand. Kaple and Abel are currently running neck and neck, with Kaple just barely claiming the lead. McBath has been trailing in a distant third, but her campaign has seen a spike in support in recent days, primarily from the Everytown for Gun Safety Action Fund, of which she is a prominent member.

Since this is the Atlanta suburbs, this race will be a squeaker for Democrats - and that's only if they can actually convince the roughly five percent of voters who sung for Handel last year. Abel could (in theory) reach across the breach for Never Trump Republicans, and Kapel could pull 20 and 30 somethings into polling booths. This is an area populated by Boomers who fled cities during white flight, and a woke as fuck candidate like McBath could be polarizing to the absent minded racists still lingering about. After all, there is still has a massive monument to the Confederacy a short drive away, but all that could easily be wrapped into a strong anti-hate campaign if McBath is given a chance.

The bottom line here is that this is going to be a tough race for everybody, and the RNC isn't giving this seat up without a fight. Nobody likes a negative campaign, but Handel's spent last year rolling around in swamp scum and shockingly easy to call her a store-bought candidate. At the moment she's the favorite to win in November, but a candidate with a strong message like McBath or Kapel could easily force her to answer for her corporate cuddling. A rash of school shootings, the opioid crisis, and the desire for affordable healthcare makes this race a relative toss up. Ossoff (and millions of dollars in outside spending) pulled this historically Republican stronghold 10 points to the left last year, but it's still early and anything could happen between now and November.

Wonkette is 100% ad-free and reader supported, and we drink our coffee black because the sugar lobbies hate us.