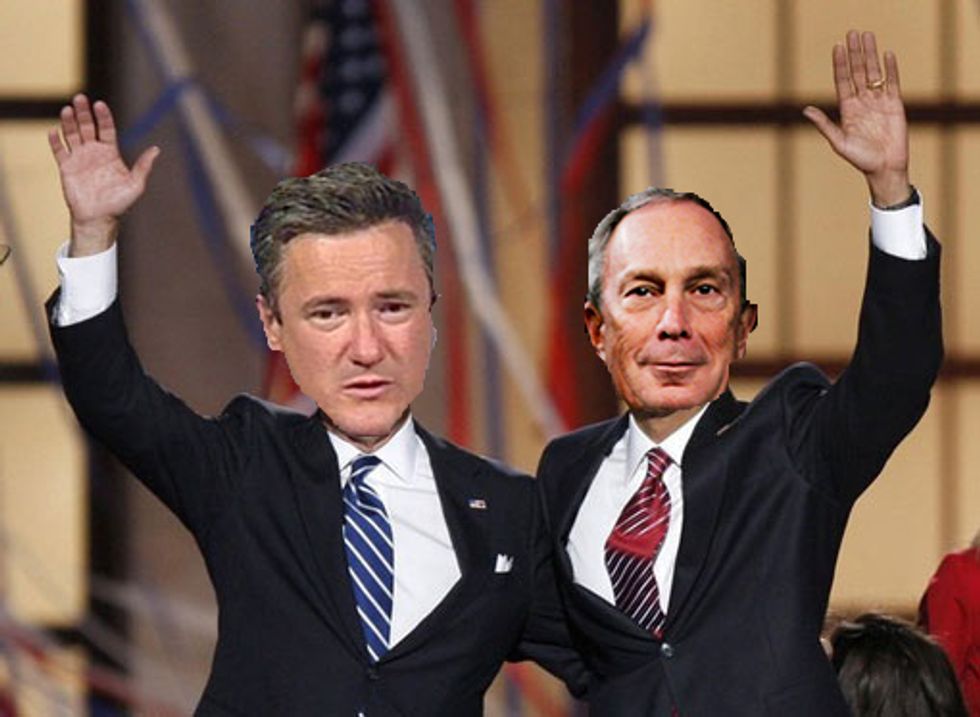 Huffington Post celebrity vag-slip blog intern Howard Fineman has heard some terrorist chatter around New York about a very interesting thing:New York Mayor Mike Bloomberg and MSNBC morning-bro Joe Scarborough running as an independent presidential ticket in 2012. Yes, Joe Scarborough. It doesn't make much sense to us either. Scarborough denied that any serious discussion has happened, obviously because he doesn't want to deny such an attractive idea. Bloomberg's people didn't respond to Fineman, obviously because it's mortifying for any man to hear people say he's thinking about running for president with Joe Scarborough. And that's not the worst part of this. Some people actually told Fineman that Scarborough could run at the top of the ticket.

"Joe really wants to be the VP candidate if Mike runs," said a source very close to the mayor. "But whether Mike feels the same way about Joe -- that's not clear." A pro-life, pro-gun running mate is, well, a pro-life pro-gun running mate, some Bloombergers worry.

"Bloombergers"? Who the hell are these people who think about random fantasy running-mate combinations for their friend all day? A jovial crackhead patrolling the streets in front of City Hall probably told this to Fineman.

No slouch in the confidence department, the talk-show host might regard himself as the more electable, and conclude that the way to advance the independent cause would be to spend the mayor's money -- friends say Bloomberg would be willing to spend $3 to $4 billion -- to get a new-age good ol' boy into the Oval Office.

A "new-age good ol' boy"? What does that mean? Perhaps Howard Fineman gave that delightful crackhead a quarter and took a few huffs of whatever was in his paper bag. And "$3 to $4 billion"? Does that mean Bloomberg would buy each and every American voter a new car? That's the only way more than five people would actually vote for this ticket. [HuffPo]