Mike Flynn Pleading Guilty! How Fucked Is The White House? ALL OF THEM, KATIE! 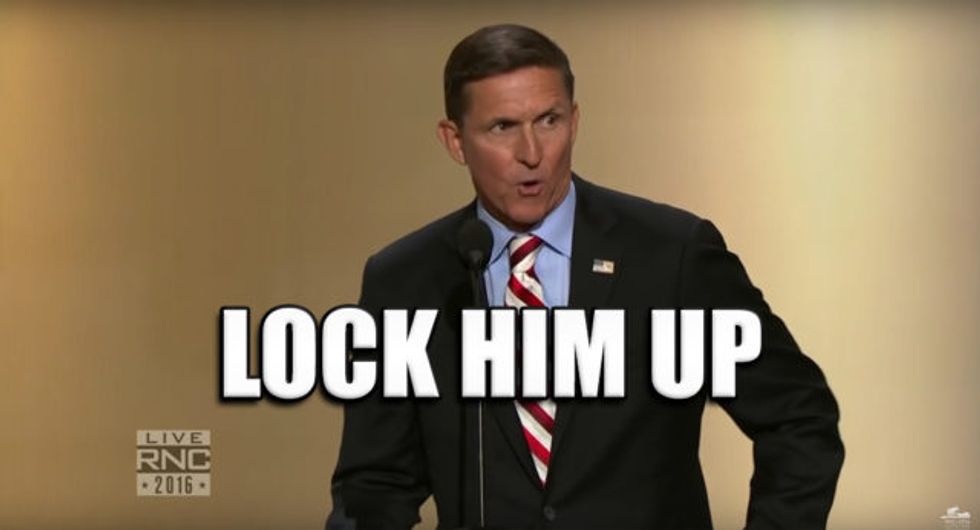 Holy Flynnghazi, Batman! Breaking news in the Flynngate Russia scandal! Looks like somebody's getting LOCK HER UPPED in the Flynn-vestigation, AND IT IS LITERAL ACTUAL FOREIGN AGENT MICHAEL FLYNN!

Okay, enough with the shitty puns. As we type this morning, former National Security Advisor Michael Flynn is in a federal courthouse in DC pleading guilty to one count of lying to the FBI about all his secret sexxxxy Russian funtimes. All those pinky swears that he never, ever whispered sweet nothings into Russian Spy Ambassador Kislyak's ear promising him that America would revoke sanctions against Russia when Big Daddy Trump got to the White House? LIES. DAMN LIES.

"Wait a goddamn minute," you are saying right now! "Didn't Wonkette promise us that Flynn was going down for doing all the crimes? What about that Turkish kidnapping plot? And when is that slimy Mike Flynn Jr. going to get what's coming to him? That guy is the worst!"

To which we say, CALM YOUR TITS! Robert Mueller, hallowed be his name, is not just letting supercrimer Mike Flynn off with a slap on the wrist. The Special Counsel has been squeezing Mike Flynn's nuts for weeks, and it looks like they finally cracked.

Last week Flynn's legal team notified the president's counselors that they could no longer share information and strategy about the Mueller investigation. This was widely interpreted as a sign that Flynn had flipped -- that he had the goods on people higher up in Trumpland and was willing to talk in exchange for a lighter sentence. And here we are today, with Flynn pleading guilty on a charge that carries a maximum penalty of just five years in prison. The guy who has been shouting from the rooftops since March that he would do ANYTHING for immunity and that he had "a story to tell" is ready to sing. AND WE ARE READY FOR THE CONCERT.

If we had to speculate on Flynn's motivations, we'd say he did a little back of the envelope math and realized that after $10 million in legal fees he was going be found guilty and lose his pension. Even if Trump pardoned him on the federal crimes, he and his idiot son would likely face state charges in New York and Virginia. Of course he talked! What the hell else could he do?

The only question is, how many people in Trumpland can Flynn incriminate? Did he and Trump discuss firing Comey to end the FBI investigation? Did they discuss pressuring Senators to end the Congressional inquiry? Was he there when Jared shook down the Russian bankers for money to bail out his family business in exchange for sanctions relief? Does he know about coordination with Russian hackers to blanket the midwest with fake news social media posts?

And, OH, LOOKIE HERE! This just came across the Tweeters as we typed.

Just now: @BrianRoss on @ABC News Special Report: Flynn promised full cooperation to the Mueller team and is prepared to testify that candidate Trump "directed him to make contact with the Russians.” https://t.co/E0tA37GOo0pic.twitter.com/PmNEO7eekt