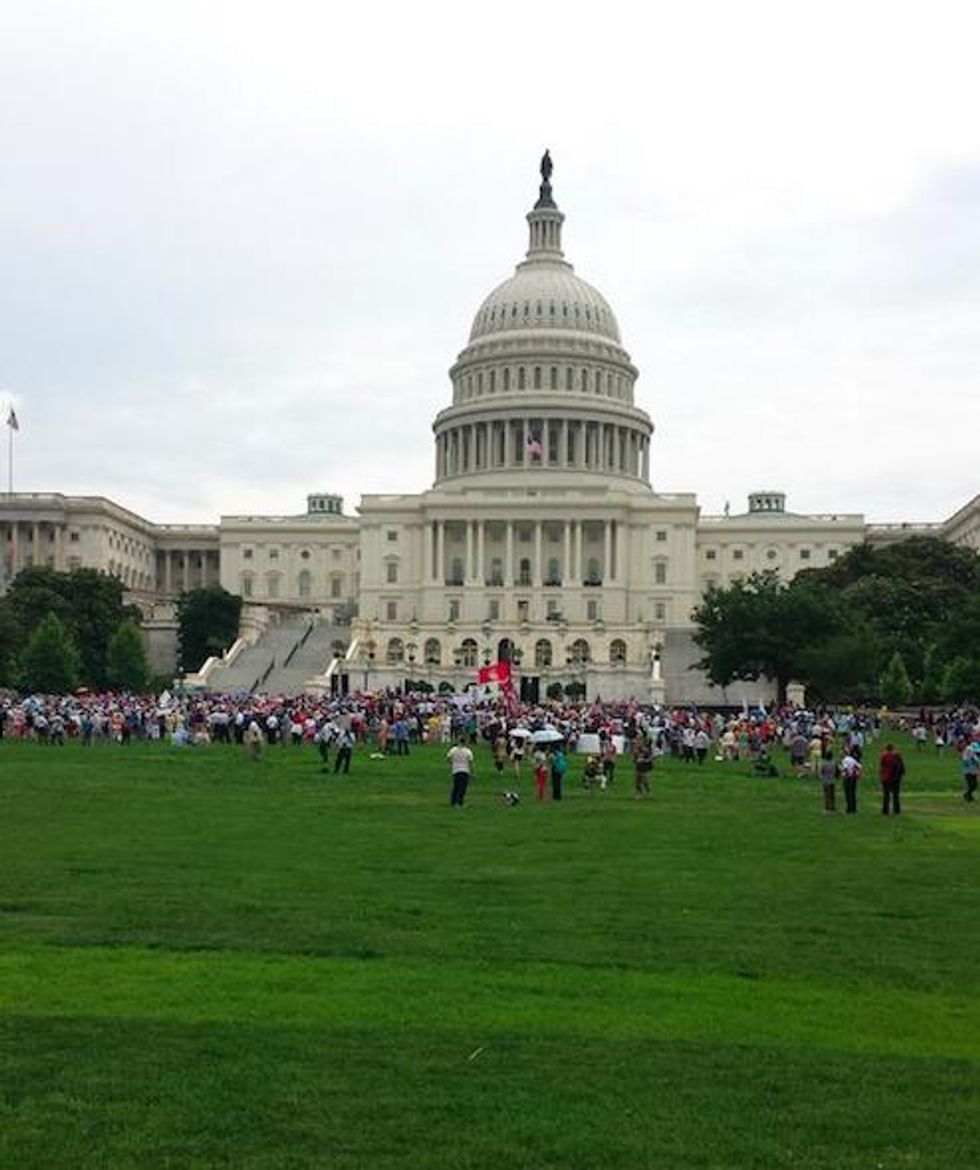 Yesterday, you may have noticed that it was a key date in the history of American civil rights. On June 19, 1964, the Senate passed the Civil Rights Act, which Lyndon B. Johnson would sign two weeks later on July 2. But after this year, no one will remember anything about that stupid old Civil Rights Act, because the real thing we will celebrate forevermore on June 19 is the March for Marriage, which drew literal scores of people to D.C. to hate on the gays getting married. Making this all the better: Mike Huckabee!

Yes, the National Organization for Marriage promised us the moon, attendance-wise, but ultimately only about 2,000 people turned up to keep marriage safe from the gays, which does not seem like much of a bulwark against the onslaught of homosexxicans.

Ever the orator, Mike Huckabee kicked things off with some really incoherent and vague-sounding stuff about liberty and the Constitution and God and oh, Mike Huckabee does go on.

“Nothing threatens your personal liberty more than the notion that you would bow your knee to the court system apart from the ultimate rule of the Constitution,” he opined. “And all of the branches of government, all of which are not there to tell you what you cannot do, but to guarantee the freedoms that you are always empowered to have.”

“We are under an obligation to obey God and the law, and if necessary, to defy an institution that is out of control,” the former Arkansas governor continued.

This would all be very fine and good if this theory could explain who, exactly, should interpret the Constitution if it isn't the courts. Do you just call Mike Huckabee and see what he thinks? Do you just go for mob rule? Also, what if we feel like one of the freedoms we were always empowered to have was the freedom to have hot gay sex instead of to listen to Mike Huckabee?

But of course we should listen to Mike Huckabee, because Mike Huckabee is pretty much the spiritual descendant of Martin Luther King Jr., who would also too totally hate the gays, which is somehow what Mike Huckabee gets when he reads "Letter from Birmingham Jail."

“One may well ask, ‘How can you advocate breaking some laws and obeying others?’” King had written. “The answer is found in the fact that there are two types of laws: there are just laws, and there are unjust laws. I would agree with St. Augustine that ‘An unjust law is no law at all.’” [...]

“I wish I had penned those words,” Huckabee exclaimed. [...]

Do you think Mike Huckabee thought that his meshes/messes with the Constitution bit of wordplay was going to be his own version of "free at last"? Or maybe his "Mr. Gorbachev, tear down this wall"?

Somehow we don't believe that in 50 years we will be quoting Mike Huckabee, except as a cautionary tale or a way to scare small children, but please don't tell him that. It would probably break his tiny little angry heart.