Mike Huckabee: Maybe Holocaust Metaphor 'Not A Good One.' Or Maybe It Was AWESOME! 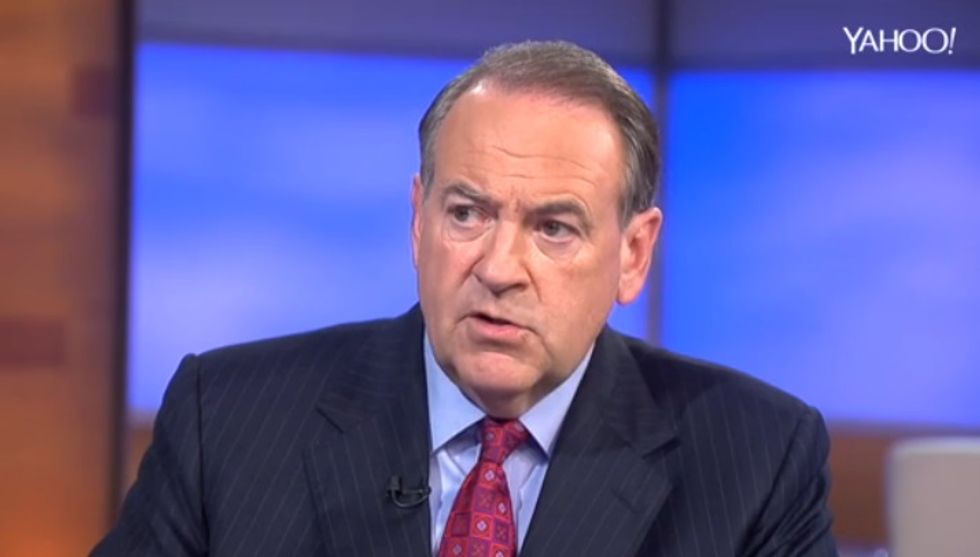 Mike Huckabee feels right bad about having ruffled some feathers with his comments about how the Iran nuclear deal is exactly like the Holocaust, with Barack Obama preparing to "take the Israelis and march them to the door of the oven." Except that he isn't sorry at all, because it was a terrific metaphor. That maybe he shouldn't have used in exactly those words. But it's really accurate. That's the gist of his stumbling, sorry-not-sorry discussion of the comments in a Yahoo News interview with Katie Couric, in which Huckabee flops around like an impressive presidential-candidate flounder that's brought along its own gaffe.

Couric asked Huck why he thought plenty of Israelis and American Jews -- despite Huckabee's insistence that the "response from Jewish people has been overwhelmingly positive" -- were so upset by his calling Obama Hitler (which is, after all, standard Republican rhetoric since the Tea Party Summer of 2009). Huck initially said, rather proudly, "There's a boldness and a clarity to it," but denied that he was just trying to get attention for himself. He simply wanted to Save Israel, as any good American president would, and he had to say it because he's visited Auschwitz three times and learned the important lesson that signing a nuclear treaty with Iran would be the same as Hitler coming to power again, we guess. That's not on the official tour, but it's definitely clear if you read between the lines. Huckabee also explained that the Holocaust happened "because people didn't take the threats seriously," and besides, it was the Iranians who talked about wiping Israel off the map first.

Couric asked Huckabee about his repeated use of Holocaust imagery, noting that he'd also compared abortion and gun control to the Holocaust as well. "Do you fear that you've minimized the horror of the Holocaust by using those comparisons so liberally?"

Huck answered that he is "much more careful" about not over-using the metaphor, as of right now at least, but this most recent case was absolutely accurate, since the Iran nuclear deal could literally lead to "the potential slaughter of millions of Jews" (assuming of course that Iran has a national desire to be incinerated in a retaliatory nuclear attack, which of course they probably are, the hotheads). Asked if he regretted the remark, Huckabee pulled off an elegant double-flop:

At the time, I didn't. But looking back, I think that maybe the metaphor is not a good one. It should be strictly used. But in this case, it's absolutely appropriate because the Iranians are threatening the murder of millions of Jews.

When Couric pressed him on why, if the metaphor was so perfect, Israelis have called it offensive, Huck punted, explaining that the Israelis are very sensitive to their security, and yadda yadda Never Again, which kind of misses the point of why Jews are pissed at him. Also the liberal media made him look bad, maybe? But it's completely accurate to use Holocaust imagery when talking about the arms agreement with Iran, because now instead of having to round up all the Jews and put them on trains, Huckabee explained, "They say about Israel, 'It's a one-bomb country' because it's so small, you know, Katie, if we don't take that seriously, God forgive us."

So there you have it: Mike Huckabee could have used better words, maybe, except that they were perfect, and then Huckabee explained that even if the rest of the world dropped sanctions on Iran, he could still keep them from getting a bomb by continuing American sanctions, drilling all the oil we have and selling it to Europe so they'd keep up the sanctions too, and bankrupting Iran and their nuclear program through undercutting them on oil prices, during which time apparently Iran would just stop enriching uranium because they would be afraid of our big brave President Huckabee. And then we could negotiate with Iran, just as soon as they stop being our enemy. Oh, and if we need to, we can always go to war with Iran.