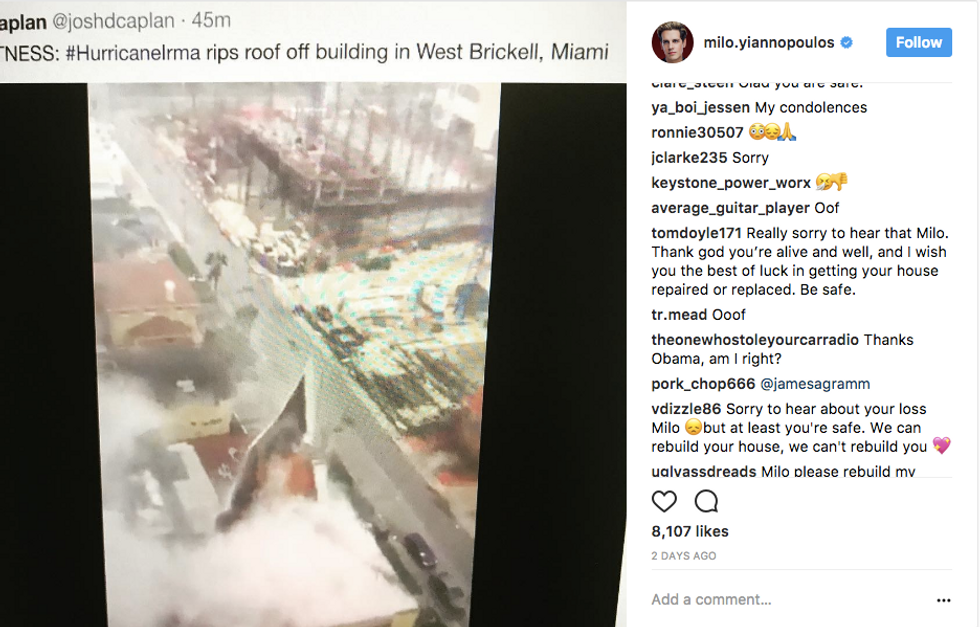 On Monday, the vacuous sack of Dep hair gel and bile known as Milo Yiannopoulos posted a picture of a house destroyed by Hurricane Irma, along with the caption "my house is gone." He soon found himself the recipient of an outpouring of support, even from many who professed to not like his politics, as well as a few comments about Hurricane Karma. You know, because he is a terrible person and had also just recently posted (and since deleted) a Facebook status declaring “In more positive Irma news, Richard Branson's Necker Island home has been devastated.”

Via The Miami Herald:

We checked to see if Yiannopoulos does indeed own that home (we doubted it, since why is he still posting about 9/11 related news on Monday and not dealing with the recovery?). Plus, we heard he lives in the Miami Beach area.

So anyhoo. YEAH. That house that got decimated does most definitely not belong to Yiannopoulos.

The Miami Herald found the place, and it’s in Edgewater, at Northeast 27th Street and Fifth Avenue, which is close but definitely not the Brickell neighborhood where it was rumored to be on social media.

Reporter David Smiley spoke to a neighbor who witnessed the drama unfold and it turns out the property belongs to a guy named Gerard Duhart, who had evacuated ahead of the storm.

This is, I can only imagine, what passes for humor in Milo's neck of the woods -- unless he has some form of House Munchausen's? Clearly, he thinks it is very funny that people like Gerard Duhart lost their homes in a hurricane. Personally, I am not getting the punchline here, but that is probably because I am one of those humorless feminists who pretty much never pretends to have had her house destroyed in a natural disaster.

Perhaps this is some kind of publicity stunt? A weird, sad, and honestly kind of boring publicity stunt? Milo announced in April that he would be starting up a new media business, and had secured $12 million from anonymous investors (COUGH MERCERS COUGH) looking to support his pipe dream.

"This isn't some vanity nameplate on a personal blog. This is a fully tooled-up talent factory and management company dedicated to the destruction of political correctness and the progressive left.

"I will spend every waking moment of the rest of my life making the lives of journalists, professors, politicians, feminists, Black Lives Matter activists and other professional victims a living hell."

Sigh. That is actually a lot sadder than having one's home destroyed by a hurricane, because he has to live with himself, and Christ, that sounds tedious as hell. Also tedious? Your OPEN THREAD!

Did you just feel extremely grossed out upon hearing that people had given TWELVE MILLION DOLLARS to Milo so he could do all the trolling? Well, then you should donate $12 million dollars to WONKETTE! Or like, whatever spare change you have lying around. Click below to donate!