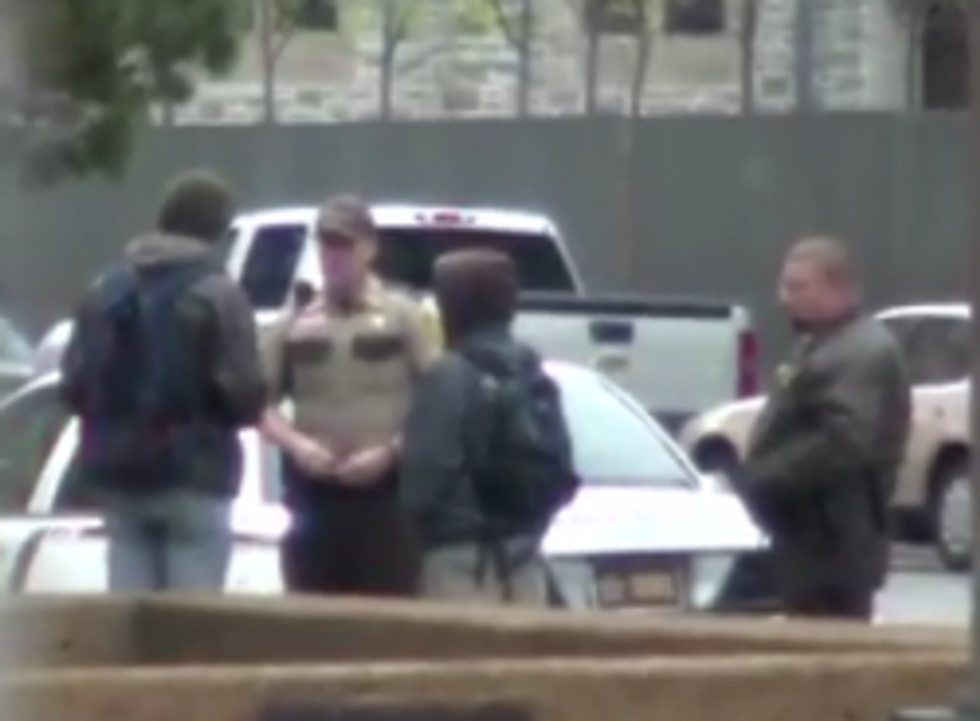 Minnesota State Patrol had a great idea, seeing as they are bored and hate everyone, particularly Occupy protesters? The Occupy protesters are just hanging around the central location of Peavey Plaza, causing problems, wasting cardboard, not getting jobs, so in lieu of beating them with a stick, the police department decided it would work better to "recruit" these useless individuals, feed them marijuana and possibly other drugs, then observe their behavior as part of a police "training" program that teaches state patrol officers what different kinds of intoxication look like. Others were apparently given weed if they would simply rat on fellow protesters. It was very exciting for some Occupiers, because their title was suddenly High Police Informant. "I smoked with a cop," said a man who identified himself as Panda, and it was "some of the best shit I've had in a while."

For most victims of this experiment it was described as just creepy and weird, and so these people were happy to be part of a documentary put together by Communities United Against Police Brutality and other groups.

One guy told the filmmakers that he was given a bowl of weed to smoke, and then was basically let loose in downtown Minneapolis, "visibly intoxicated." According to CityPages, he then:

dangerously climbed to the top of a large sign near Peavey Plaza sitting 15 feet above the sidewalk, swinging his arms and legs. The man said that on another occasion, officers expressed disappointment that he was only high on weed. Officers told him they were "looking for something more harder (sic), someone to do meth or coke or something. I've never told a cop this before, but I said 'fuck you, I don't touch that,'" the man said.

This week, the Minneapolis City Council heard from several people involved. One witness came in the form of a mom, who said she was "very upset because her son had been given free drugs by a police officer when he went out to participate in what he thought would be social action in a public plaza to help improve his community and country," in the words of Councilman Cam Gordon.

According to a woman who participated in the research, this is a real, official, taxpayer-funded thing. The police are "trying to observe the characteristics of certain drugs so when [police] pull people over they know what they're looking at," she told the documentary filmmakers. It's called the Drug Recognition Evaluator program, and it's run by the Minnesota State Patrol. And here's the whole 35-minute documentary:

For now, the Minnesota State Patrol says, via Lieutenant Eric Roeske, that, "We’re aware of the video and the allegations made by individuals in the video and we’re looking into it." A police inspector at this week's City Council meeting added that, "the program that I know is not how it's described."

Roeske also told the Minneapolis Star Tribune that the program usually tries to find people who are "already intoxicated," and then, well, what, asks them what they're on? And hopes they're telling the truth? How do these reports go, then? Officer X observed that when intoxicated with just about anything, subject ran very far away from law enforcement personnel. X concluded that all drugs cause individuals to be fearful. X will now be on the lookout for anyone moving hurriedly away from law enforcement personnel, and will arrest them. [CityPages/Minneapolis Star Tribune]