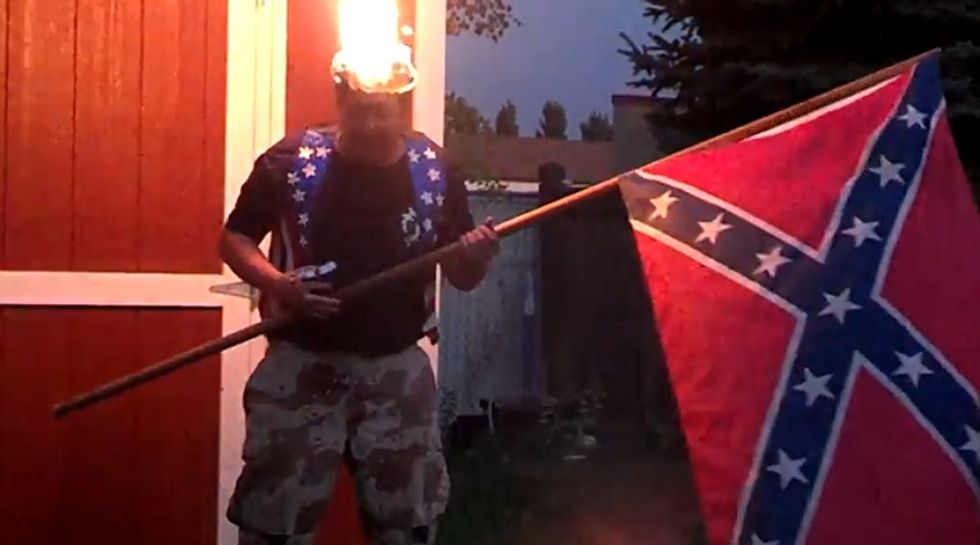 In a great victory for freedumb, the "Magnolia State Heritage Campign" is pushing a ballot initiative that would finally give the state's Christian heritage the recognition that it deserves, writing into law that Mississippi is a "principally Christian and quintessentially Southern state" and also acknowledging that the Holy Bible is where all the state's laws really come from.

But don't worry, if this thing gets the 110,000 signatures needed to get on the ballot (likely) and actually passes (likely, but then again, we thought Mississippi would pass its Personhood Amendment, which failed) the law won't violate the Establishment Clause of the First Amendment, because it cleverly says it won't. Just lookie at the relevant text from the proposed law -- it's the very first clause of the law, since it's that important:

The State of Mississippi hereby acknowledges the fact of her identity as a principally Christian and quintessentially Southern state, in terms of the majority of her population, character, culture, history, and heritage, from 1817 to the present; accordingly, the Holy Bible is acknowledged as a foremost source of her founding principles, inspiration, and virtues; and, accordingly, prayer is acknowledged as a respected, meaningful, and valuable custom of her citizens. The acknowledgments hereby secured shall not be construed to transgress either the national or the state Constitution’s Bill of Rights.

While Yr Doktor Zoom is not a lawyer (though he is a minister), that sure looks like a beautiful invitation for some lawsuits. But who knows, maybe there's enough constitutional hair-splitting in there for it to not quite be "establishing" a state-endorsed religion, which is Christianity, the most important religion of all.

The whole law is just chockablock full of love for the Confederacy, too. Section 3 of the law would require that the state flag be displayed at any school or office the U.S. flag is, so that its cute mini-Confederate flag emblem can serve as a reminder that Mississippi still clings to treason. That section also mandates that children say a prayer to the state flag:

In Mississippi public schools and other public institutions, whenever the pledge of allegiance to the national flag is recited, the state flag salute shall be recited immediately thereafter. The state flag salute shall be: “I salute the flag of Mississippi and the sovereign state for which it stands with pride in her history and achievements and with confidence in her future under the guidance of Almighty God.”

Can't see that being a problem, nope, nope, nope. Just recognizing heritage is all.

The law would also enshrine the annual observance of "Confederate Heritage Month" in April, requiring schools and government offices to be closed on "Confederate Memorial Day." It would recognize that the right to "acknowledge, observe, and celebrate “Dixie Week” throughout the seven days preceding Confederate Memorial Day shall not be infringed." It doesn't specify what activities are appropriate for "Dixie Week," but we'll assume that all the stores will offer deep discounts on wooden beams, kerosene, and white sheets.

And of course, the law mandates that the University of Mississippi bring back the “Colonel Reb” mascot that was finally dropped in 2010, and specifies that "Dixie" shall be played at every opportunity (especially if nigras are sitting in front of ya at the f'ball game). It even mandates that the mascot's "appearance shall be an accurate reflection of Colonel Reb’s definitive appearance on the cover of the 1947 University of Mississippi yearbook." We didn't check, but we'll assume that's the one where Colonel Reb is depicted administering a literacy test to a black guy trying to register to vote.

For "balance," the law also codifies the mascots for the other two state universities, because it's important to pretend that this isn't about just slobbering all over racist imagery that isn't about hate anyway.

Also, just to make sure that every possible wingnut priority gets a warm oil massage, the proposal would declare English the state's official language:

All governmental or public non-emergency or non-judicial services, functions, or communications in Mississippi shall be rendered in the English language only, except for specific foreign language instruction in public schools, and except for the option of Latin or French for jurisprudence, medicine, heraldry, and other traditional uses.

In a pinch, they are apparently willing to allow emergency workers to use Spanish, so that's mighty open-minded of them. We also are surprised that the proposal didn't enshrine open carry of firearms as an official part of Mississippi Heritage -- probably evidence that the Heritage Campaign is secretly a bunch of liberals.

It is not clear from the law's text whether Confederate Heritage Month, when combined with the official recognition of Christianity as the state's primary religion, would require that schools explain how the Bible justifies slavery, or whether that would merely be one of the many options for celebrating Dixie Week.

Have yourselves a blessed, Heritagey-not-Hatey day.