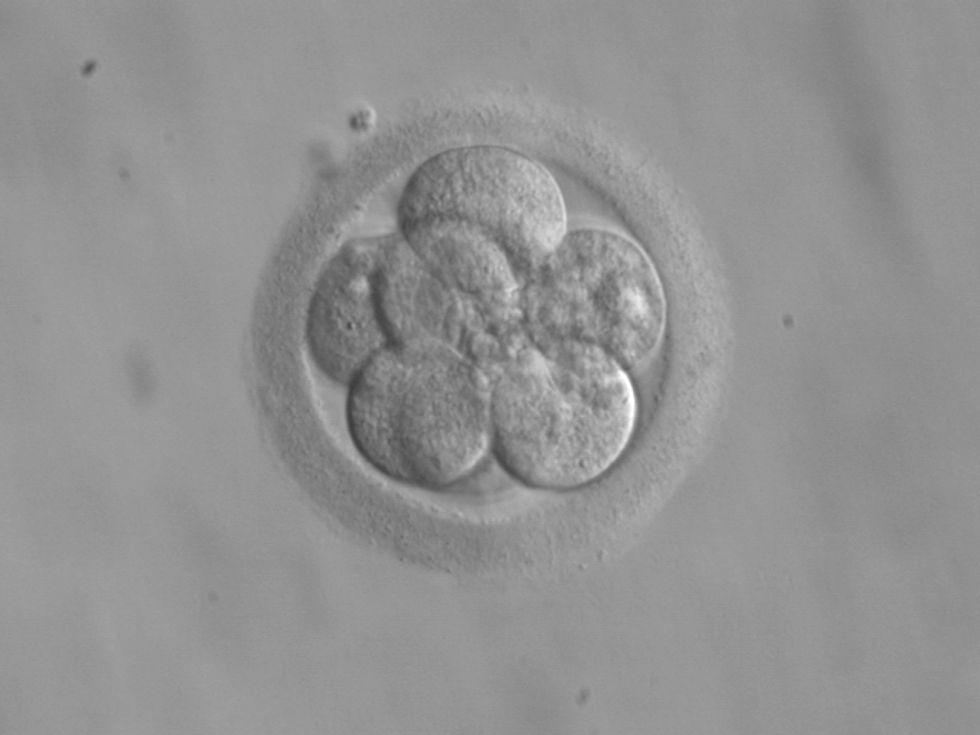 This Thursday, the Missouri House voted 110-37 to pass a bill meant to protect the "life, liberty, the pursuit of happiness and the enjoyment of the gains of their own industry” of fertilized eggs like the one pictured above -- which, if passed by the state senate and signed by the governor, would effectively outlaw abortion. Well, at least for about five minutes until a court told them they could not outlaw abortion, as has happened basically every time any state has tried to pass a bill like this. But that doesn't mean they're not gonna try! Because just look at that zygote! Why would you want to deprive that zygote of enjoying the gains of its own industry? Who is gonna get paid for all the modeling it's doing?

The bill declares every fertilized egg a fully fledged human being with all the rights of you or I, meaning that you could not murder it even if a rapist put it there. This, actually, is an awesome thing for rape victims, according to Rep. Tila Hubrecht (R-All the uteri). Because although being raped is maybe not THAT good of a time, "God can give us a silver lining through the birth of a child."

You know, it's true -- no one ever looks on the bright side of rape. No one but Rep. Tila Hubrecht has even bothered to consider the fact that maybe rapists are actually doing their victims a favor by inseminating them. Besides, if God didn't want them to get pregnant against their will, then he wouldn't have made someone rape them while they were ovulating. He works in such mysterious ways! (Hey, wasn't there a U.S. Congressman from Missouri one time who was pretty sure women can't even get pregnant from "legitimate rape" because their bodies have "ways to try to shut that whole thing down"? These Missouri Republicans know what's up.)

Heck! There are even many circumstances in which God is totally cool with rape, so long as it fits within certain guidelines!

“When you go out to war against your enemies and the LORD, your God, delivers them into your hand, so that you take captives, if you see a comely woman among the captives and become so enamored of her that you wish to have her as wife, you may take her home to your house. But before she may live there, she must shave her head and pare her nails and lay aside her captive’s garb. After she has mourned her father and mother for a full month, you may have relations with her, and you shall be her husband and she shall be your wife. However, if later on you lose your liking for her, you shall give her her freedom, if she wishes it; but you shall not sell her or enslave her, since she was married to you under compulsion.”

There are NO circumstances in which God approves of murdering a zygote. He might command you to kill a baby from time to time, but never a zygote. God loves all the zygotes. Except for those conceived by infidelity, in order to punish the woman doing the infidelity. Not so she can have like, a life or something.

The state of Missouri simply hopes to add to their impending joy by forcing them to carry the baby to term, which will give them the beautiful opportunity to contribute to the state's economy by paying $8,805-$18,474 for the birth alone! And that doesn't even include the cost of pre-natal care, or the cost of actually raising a child if they didn't give it up for adoption! Or the cost of therapy from the trauma of being forced to carry the child of the man who forced them to have sex with him. How cool is that? It would be sort of like their vagina was MISSOURI'S vagina.

Even better, with the wording of the bill, many forms of birth control will be outlawed as well, which would increase the number of unwanted babies across the state. Exciting!

By the way! The original title of this bill was, naturally, the "All Lives Matter" bill. Because why just fuck with abortion-havers when you can ALSO fuck with black people, amirite? Especially given that it was written at a time when all the mean black people were going around Missouri telling white people that their lives didn't matter AT ALL, just because they don't get shot by cops all the time when they are unarmed.

SADLY, as I mentioned in the beginning, even if this bill passes, it'll get struck down, because you're definitely not allowed to ban abortion, no matter how super clever you are about your wording. So all the hard work of the Missouri House will be for naught, and many sexual assault victims will be tragically denied the joy of being forced to have silver lining rape babies.