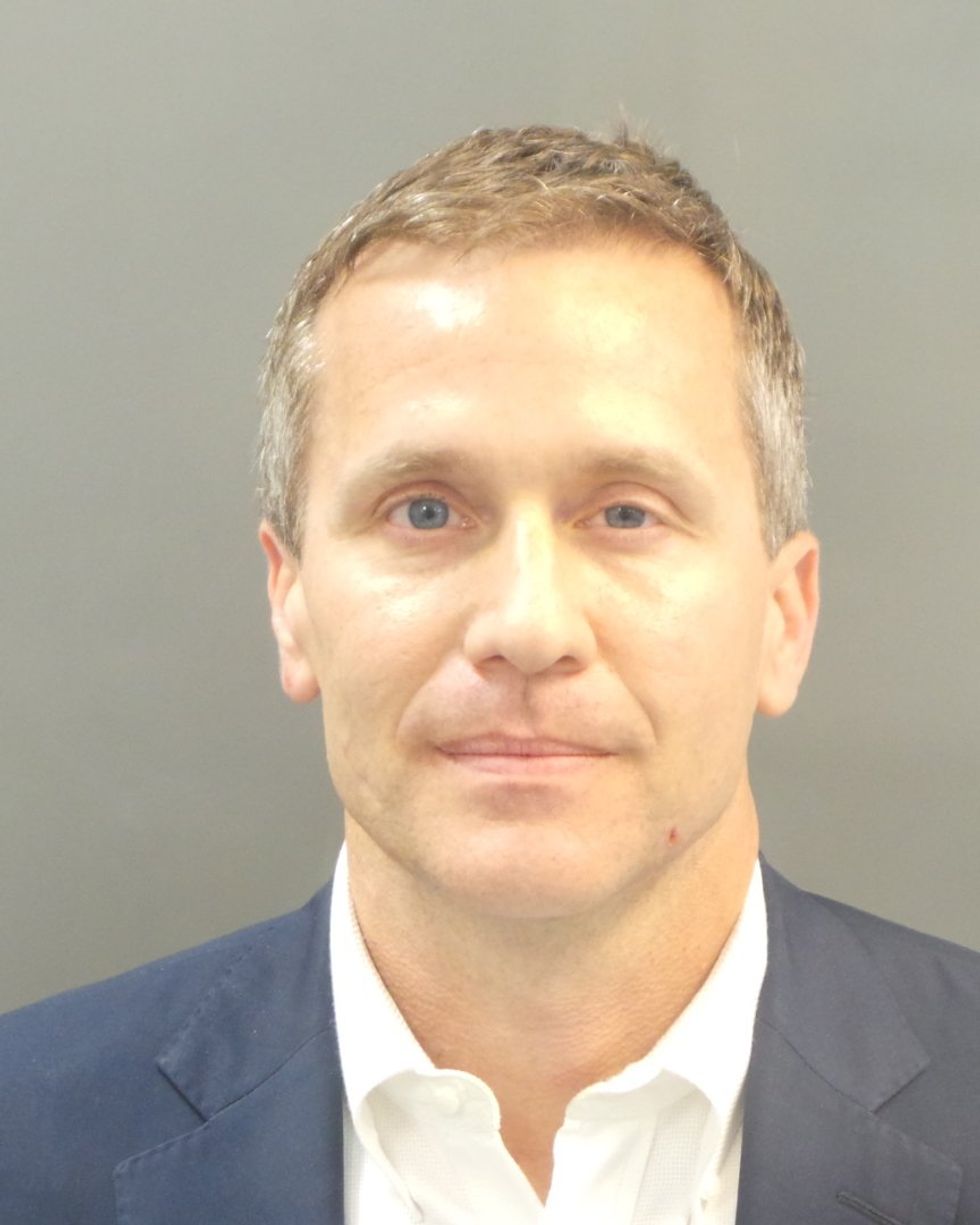 Was Missouri Governor Eric Greitens inspired by those Fifty Shades of Diet S&M books? Is that where he got the idea to bind his naked ladyfriend to the pull-up machine with tape, blindfold her, and snap a picture? We have no idea, since we are elitist snobs who read only the finest Twitter literature all day. But if there is a scene where that billionaire dude takes a naked photo of his future wife and threatens to publicize it if she ever mentions his name, well, then we are feeling pretty good about our decision not to read those books. FIGHT US!

But back to Greitens, who was arrested yesterday and charged with felony invasion of privacy.

Greitens appears not to have been photographed while handcuffed. Guess he didn't consent to that. He made a serious face for that mugshot up there, before being released on his own recognizance. But now he's out and ready to tell the world about those mean Democrats and what they did to Eric Greitens, THE REAL VICTIM HERE.

One minute you're taking a naked blackmail photo of some lady who came over to bump uglies with you while your wife and kids were out, and the next minute some reckless liberal is trying to turn that into a crime! UNFAIR!

Greitens's lawyer released a statement promising to fight the charges.

And yesterday Dowd filed a Motion to Dismiss on the grounds that ERIC GREITENS IS NOT A PEEPING TOM. Seriously.

The law prohibits photographs or videotaping by third-parties who take photographs or videotapes in locations where a person is in a partial or full state of nudity and where the victim does not believe he or she is being viewed by another. The law, then, applies to situations such as voyeurs or peeping toms who take photographs in locations such as restrooms, tanning beds, locker rooms, changing rooms, and bedrooms. The law does not apply to the participants in sexual activity.

Now, if we are being honest, we kind of see his point. The statute explicitly refers to places where victims have a "reasonable expectation of privacy," which is probably not the case when they are extramaritally sexxxing some politician in his finished basement. Seems to us that she had reasonable expectation of not being photographed -- under Greitens's interpretation of the statute, it would be legal to take photos in the shower at the gym. But shame on the Missouri Legislature for being crappy drafters! Because Greitens's argument that the lady in question knew she was getting nekkid in front of him may well persuade a jury that he didn't violate the letter of the law.

The public is another matter. "She Knew She Was Naked, Even If She Didn't Know I Was Photographing Her" is a lousy campaign slogan. Also too, Greitens isn't denying that he violated the second part of the statute,

... and the person subsequently distributes the photograph or film to another or transmits the image contained in the photographor film in a manner that allows access to that image via a computer.

Have we mentioned that Missouri Republicans are very special? Greitens insists that he'll be fighting these scurrilous charges and has no intention of resigning, and members of the state GOP are still thinking about whether photographing a naked woman without her consent is bad or like really bad. Because they are good Christians representing the Party of Family Values. Amen.

Wonkette will never threaten you with nakey pictures. Please extort yourself on our behalf.